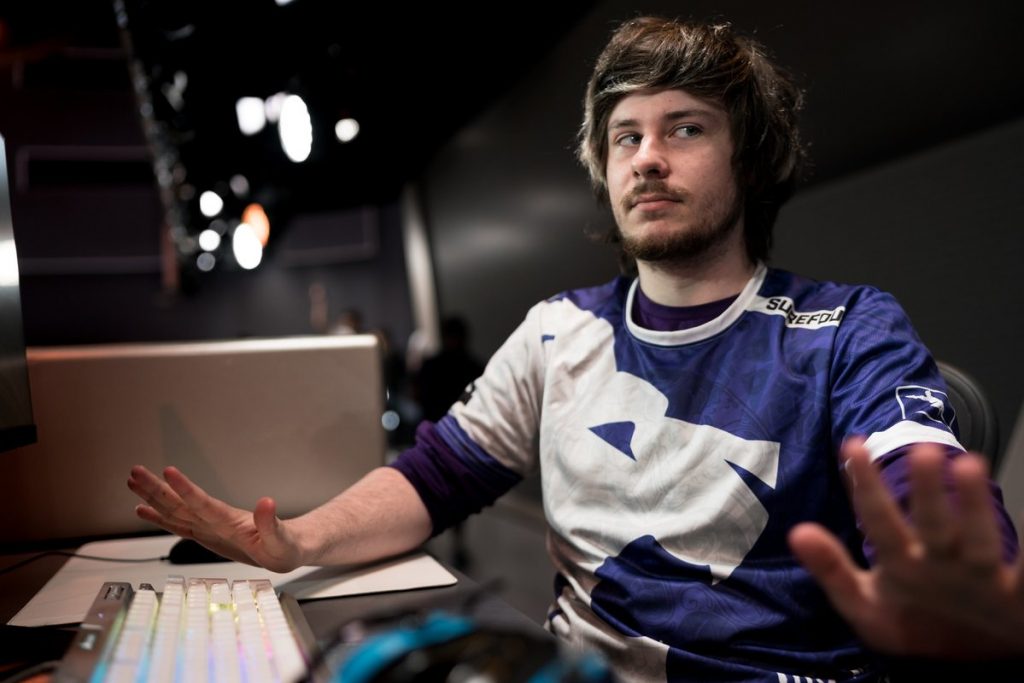 The Gladiators had an All-Canadian weekend in the Overwatch League, facing both Toronto and Vancouver (photo courtesy of the LA Gladiators)

Surefour and the LA Gladiators had a Canadian packed lineup this weekend facing off against both the Toronto Defiant and the Vancouver Titans. The Toronto Defiant are failing to find stable footing in Stage Three as they sit near the bottom of the standings with a disappointing 0-5 record. The Defiant’s matchup against the LA Gladiators wasn’t set to be a win for them but with Mangachu’s recent addition to the Defiant, fans were hopeful they could pull off the big W.

The series between Toronto and Los Angeles started on Nepal where the Defiant tried to start off with something different – a Hanzo, Widowmaker, Orsia, and Mercy comp. Unfortunately, it didn’t work against the standard GOATS strat that the Glads were running and they quickly had to switch up their hero composition. Decay was absolutely dominant on Shrine with his Sombra plays disabling the Defiant from even getting to the point as the Glads ticked from 97% to 100% securing their second win on Nepal. Things were not looking good for the Defiant moving into map 2.

On Horizon Lunar Colony, the Gladiators were a force to be reckoned with. Their lineup boasted a Baptiste, Ana, Widow, Orisa, Bastion, and D.Va – which made quick work of the Defiant. Having a Bastion set-up on the point meant no one was safe trying to step on that point. The Glads should just be awarded the “Best Bunker Team” at this point and they won the map 2-1.

Both Numbani and Dorado were pushed to a second offense which gave hope to Toronto fans that they could pull off a reverse sweep. The Defiant found that when they stuck to the tried and true GOATS strat and didn’t overextend they were able to get at least a couple of points. The problem for Toronto is that their playstyle is too predictable and they can be outplayed. The second half of the series at least showed that the Defiant can fight even if they lost to the Glads 3-4 and 3-4. So they have the potential but they still have a lot of work to do.

🤯 Watch yourself, @DecayOW has been UNLEASHED! #OWL2019

Florida’s struggles in the league are well-documented and at this point, it doesn’t seem like their idea of just signing new players to the team is doing any good. The Spark took the easy W on this map and secured themselves their second Stage Playoffs. In the immortal words the casters during the first map “It’s looking like easy mode… for the Hangzhou Spark” and if that’s not telling for what would happen, I don’t know what is.

On Nepal, the Spark took an easy win on Village and then an even easier win on Shrine. The Spark stuck to with their favored 3-3 lineup and managed to hold the Mayhem in their base on Shrine. What’s interesting to note about the Spark is that at this point in the Stage, they win 65% of their team fights against all compositions. Seeing how quickly they won Nepal, I’d say that percentage is bound to go up after this series. They won the map 2-0 with confidence and skill.

Florida was not able to hold the Spark back at all on Volskaya Industries – and it was clearly demonstrated with the Spark’s completion time of 5:14 on their attack. Florida was able to grab the first point on their attack but was denied the second point by a well-orchestrated overtime by the Spark.

On Eichenwalde, the boys in pink and blue continued their ever-dominant offense – cleaning through the Mayhem with ease. They pushed to the payload straight into the castle with 4:14 in the bank. Some big shatters came from the Spark during the Mayhem’s offense halting any progress Florida tried to make. Not to mention the Mayhem were unable to get any kills on Eichenwalde whereas the Spark had 35 kills on the Mayhem.

On Dorado, the Spark played everyone’s, or just my favorite, PharMercy combo which was too much for the Mayhem. Florida played a Sombra GOATS which surprisingly had more bit in their lineup during the final map than they any other map. Though it was a good effort from the Mayhem, they still weren’t able to keep the Spark back and they lost Dorado 3-1.  The Mayhem still have a lot of growing to do and they’ll need to focus on team synergy, ult management, and timing their pushes better if they have any hope of performing better next stage.

The San Francisco Shock are one of the best teams in the Overwatch League and they’ve proved that through not only winning the Stage Two Playoffs but also through their continued top-level plays. They currently sit third in the league with a well-earned 16-5 record. The Hunters don’t sit as high in the standings but they are a formidable foe. However, most picked the Shock to win this series as they have been having a good season which is why the Hunter’s winning this series was a shock, pardon the pun, to many.

Ilios was a great map for the Shock but it wasn’t without a bit of a struggle. Shock took Lighthouse with a solid 100% to 57%. Sinatraa and the Shock were able to hold the Hunters back and keep them from getting to the point once the map had flipped in their favor. The Well was a hard-fought map for both teams like each getting the clock to 99% and then forcing it into overtime. Ultimately, the Hunters had the better plays and a well-timed Graviton to push it to the third point. Ruins saw the Hunters outperform the Shock several a supremely timed Graviton Surge’s in overtime. The series felt like it was in the hands of the Hunters’ the entire time with the Shock almost giving up on the Well.

On Volskaya Industries, the Hunters continued to push hard against the Shock pulling out a PharMercy, a Hammond, and a Sombra for an intense defense. The Shock stuck to GOATS with the exception of a Baptiste in the second series of attacks. The Shock were able to claim both points on the second series of attacks after both teams were relentless in their attack. The map closed with a score of 4-3 for the Shock to tie the series.

Dorado was a disappointing map for Hunter fans with an abysmal 2-0 score for the Shock. Without passion or drive from the Hunters’, the map was easily won by the Shock. Maybe they knew that they would be heading to a map 5 and decided to reserve their energy? For whatever reason, the Shock won the map and we moved to a map 5.

On Oasis, the Hunters’ pushed hard on City Centre to achieve a great 99% but once it flipped to the Shock and was pushed into Overtime, the Shock’s Moria was just too much for the Hunters. In the Gardens, the Hunters pushed back harder than before sticking to the League’s favored GOATS strat which proved to be a success for them. With the map tied 1-1, we moved to University. On University, we saw that the Hunters were happy to stick with their GOATS strat flexing in Ana as one of their supports. They became the second team in Stage Three to take down the Shock. It was a well-fought, well-deserved win for the Hunters. Having a flexible, unconventional team seems to be a good win condition for teams in the Overwatch League. Maybe we’ll see the Hunters break into the top 8 of the League by the end of the last Stage.

It would seem that defeating a Titan can give you superhuman strength. After defeating the Vancouver Titans not too long ago, the LA Valiant have a renewed strength that the fans and the league have been begging to see. After a brief restructuring and a real focus on growing as a team, the Valiant MIGHT be back. Their win against the London Spitfire might have been unexpected but they are living proof that hard work and dedication can pay off. Who knew?

With almost complete opposite league standings, both teams started on Nepal with the same bunker strat which included a Roadhog! In Village, both teams struggled against the Orisa shields and the Widow damage that came from both sides. Village flipped back and forth but was ultimately claimed by the Spitfire. In the Shrine, the Valiant were determined to win pulling out all the strategies with a Tracer, Sombra, Hammond, PharMercy and Ana. It was a fun but unconventional lineup that was met with a Soldier 77 GOATS strat from the Spitfire. The Spitfire just couldn’t deal with the damage and lost Shrine – which meant we were going to Sanctum. On Sanctum, the Valiant snowballed out of control and just couldn’t be stopped by the Spitfire. The map was won by the Valiant and we moved to Volskaya.

On Volskaya both teams saw success with well-timed ult’s and good team synergy. There were some beautiful EMP’S coming from Profit on Sombra and some fantastic Dragon Fire’s from Agilities on Hanzo, which ultimately meant led to each team getting both points on their offense. On the second round of attacks, the Valiant were able to hold the Spitfire back and closed the map with a 4-3 score. The Valiant were 2-0 moving into the half against the inaugural season champions.

We're doing it for Jeff pic.twitter.com/LOWBGBo5nO

Things looked incredible for the Valiant on Hollywood with epic sleep darts from KariV on Ana and good pressure from coming from Agilities’s Pharah from the Valiant. Their offense saw them claim both points, even after a mind-blowing Self-Destruct from Fury to wipe out four of the Valiant. On London’s offense, they were met with too much damage from Fiction, KST and the queen of the skies Agilities. They lost the map 2-0 and they moved onto the fourth map.

Watchpoint: Gibraltar was hard to watch. After already losing the series to the Valiant, the Spitfire seemed lackluster. They had some incredible plays and really insane team-wipes but it just didn’t have any impact on the match. London wasn’t able to push the payload to any points and lost the map 0-3 to the Valiant.

The Valiant not only secured a win against one of the Inaugural Champions but they also secured themselves a Stage Three Playoff spot!

It was a fairly evenly paced week without too many huge upsets, unlike last week. This week we’re heading to Atlanta for the Homestand weekend where I’m sure the weekend will be action-packed and full of incredible Overwatch. Be sure to look out for our preview this coming week ahead of the festivities.