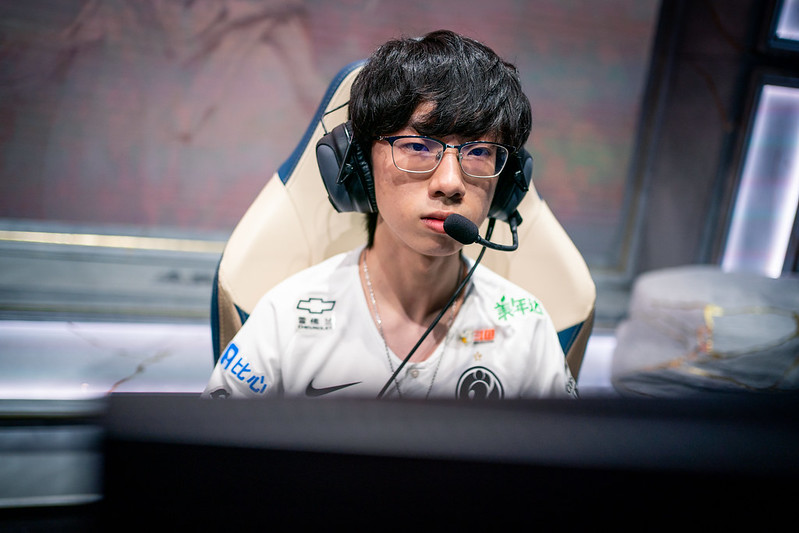 Invictus Gaming are one of three teams trying to grab the number seed for the playoffs. (Photo courtesy Michal Konkol - Riot Games)

The LoL Pro League (LPL) continues on with week nine of the 2020 Summer Split. JD Gaming, Invictus Gaming, and Top Esports are engaged in a fierce fight for the top playoff seed, while teams like FunPlus Phoenix and Royal Never Give Up are fighting for the final spot. We take a look at where things stand in the LPL by looking at the top storylines so far in China.

For most of the Summer Split, it looked like Top Esports would run away with the LPL. They started the year 8-0, but their match record doesn’t do their dominance justice. TES dropped only two games during those eight matches, both in game ones to Oh My God and EDward Gaming. But a loss to Victory Five to open week seven has thrown TES off their game. Invictus Gaming were the next to beat TES, this time sweeping them 2-0. The 7-7 Royal Never Give Up then became the latest team to beat TES, sending them to their third loss in as many weeks.

Xiaohu says NO to any comeback shenanigans and helps close a clean 2-0 sweep of TES! pic.twitter.com/mnWvicPO3u

JD Gaming seemed like the natural successor to the top spot. The Spring champions got off to a slow 1-2 start, but they were the hottest team in the LPL entering week nine. JDG had ripped off 10 straight match wins, and their 2-0 win over eStar made it 11. But when they had a chance to end the week at 13-2 and alone in first place, that pesky team Victory Five had other plans. The most improved team in the LPL upset JDG 2-1 to close out the week, dropping JDG to 12-3 on the season.

The losses by Top Esports and JD Gaming have given new hope to Invictus Gaming. Invictus Gaming are now the hottest team in the LPL, winners of seven straight matches. In that stretch, Invictus Gaming have beaten Royal Never Give Up, Victory Five, and Top Esports. Their resurgence is no fluke. The team has really taken off since Wang “Baolan” Liu-Yi has been reinserted into the starting lineup, as odd as that sounds. Remember, the package deal of Ding “Puff” Wang and Su “Southwind” Zhi-Lin was applauded more for the upgrade at support than anything else.

We close the week with another great victory against great opponent! Well done!!

Currently standing on the 2nd of the leaderboard (11W-3L). Two more series till the playoff and we will keep on fighting!

Baolan has turned back the clock to 2018, as has jungler Gao “Ning” Zhen-Ning. Ning had been steadily losing playing time to Lu “Leyan” Jue throughout late 2019 and early 2020, but Invictus Gaming made the decision to ship Leyan to Vici Gaming after Spring and dedicate themselves to Ning. Though questioned at the time, the move has definitely paid off. Ning has eight game MVPs this season, most on iG and tied for fifth in the LPL. His aggressive play has benefitted from the familiarity of Baolan’s support.

All three of these LPL powers have three match losses on the season, making it a tight race for the top spot to end the season. With 12 wins already secured, JD Gaming and Invictus Gaming both have only one match remaining, while Top Esports have two. JD Gaming have the game record advantage (26-11) over Invictus Gaming (25-13), but Top Esports (23-8) have them both beat in that category. If Top Esports can win their final two matches, even if they are both 2-1 wins, they will have the best game record and can only be tied in match record. JDG needs TES to lose one of their two games, while iG would need both JDG and TES to lose.

Top Esports play eStar and Team WE in the final week. At 3-11, eStar aren’t much of a threat to steal a series off TES, regardless of their surprising Spring Split. Team WE, however, are a formidable opponent. Team WE are still playing for their playoff berth, though they could secure it with a win over Oh My God to open the week. Even then, they’d still be playing for seeding and hoping to secure a top four finish. TES cannot take them lightly.

JD Gaming have the easiest opponent remaining in Oh My God. After a decent start to the split, OMG have lost their last seven matches and have already been eliminated from the playoffs. They have nothing to play for. Invictus Gaming will face the 7-7 Vici Gaming. VG are hoping to sneak into the final playoff spot and are currently one game behind FunPlus Phoenix for the eighth seed. Coach Kim “kkOma” Jeong-gyun is sure to have them ready for their biggest match of the season, so this will be no walk in the park for iG.

If all three teams drop games, there is an outside shot for Victory Five and/or Suning to make the jump to the one seed. Both are 10-4 heading into the final week. Victory Five will take on EDward Gaming and Rogue Warriors, while Suning face Vici Gaming and FunPlus Phoenix.

FUNPLUS PHOENIX, ROYAL NEVER GIVE UP FIGHTING FOR PLAYOFF SPOT

The battle for the final playoff spot is just as intense as the top of the standings. With only five teams locked into a playoff spot, seven squads are fighting for the last three spots. However, Team WE and LGD Gaming are both sitting pretty at 9-5. If both of those teams can win one of their final two games, the last five teams would be battling for the final spot.

Team WE should secure their playoff spot when they open the week against Oh My God. If they don’t, things will get dicey, as they close the season against Top Esports. LGD Gaming should basically be considered a lock for the playoffs, because they don’t deserve a spot if they can’t beat one of Bilibili Gaming or LNG Esports in the final week.

It was a close game but we eventually came out on the top. GGWP @LGDgaming! That TF backdoor was classic and we definitely learned something from it.

FunPlus Phoenix’s 2-1 win over LGD Gaming in week nine was huge for their playoff chances. With only a 19-17 game record, they need to be ahead on match record to beat out teams like Royal Never Give Up for the final playoff spot. FPX are now 3-0 since they reinserted Kim “GimGoon” Han-saem into the starting lineup in favor of Kim “Khan” Dong-ha, giving them momentum heading into the final week. They’ll face Dominus Esports before a very tough season finale against Suning.

Royal Never Give Up looked dead in the water after a three-game losing streak in weeks seven and eight put them at 5-7 on the season, but a win over Dominus Esports and a shocking 2-0 sweep of Top Esports has them right back in the hunt. RNG has looked much better with Chen “GALA” Wei in the lineup over Lu “Betty” Yu-Hung, while Li “Xiaohu” Yuan-Ho has earned his spot over Yuan “Cryin” Cheng-Wei. RNG has a somewhat soft final week, facing 5-9 Bilibili Gaming and 4-10 Rogue Warriors.

Vici Gaming are the other 7-7 team hoping for FunPlus Phoenix to slip up. VG recovered from a slow start to the season, but an 0-2 loss to LGD Gaming in week nine may have sunk their playoff hopes. Unlike RNG’s 19-16 game record, Vici Gaming’s 16-19 is unlikely to be winning any tiebreakers if it gets that far. VG will need to win out and hope to get help. The winning out won’t be easy, either, as they have to face Suning and Invictus Gaming to close the season.

EDward Gaming is the final team that has yet to be eliminated, but they need even more help than Vici Gaming. A single FunPlus Phoenix match win would eliminate EDG, as would two wins from either RNG or VG. EDward Gaming also would have to upset Victory Five and then beat eStar to have a chance. Assuming they fail to qualify, this would be the first time in EDG’s history that they have failed to make an LPL playoff, dating back to 2014 Spring. Unfortunately, outside of Lee “Scout” Ye-chan, this roster lacked the starpower of the past. 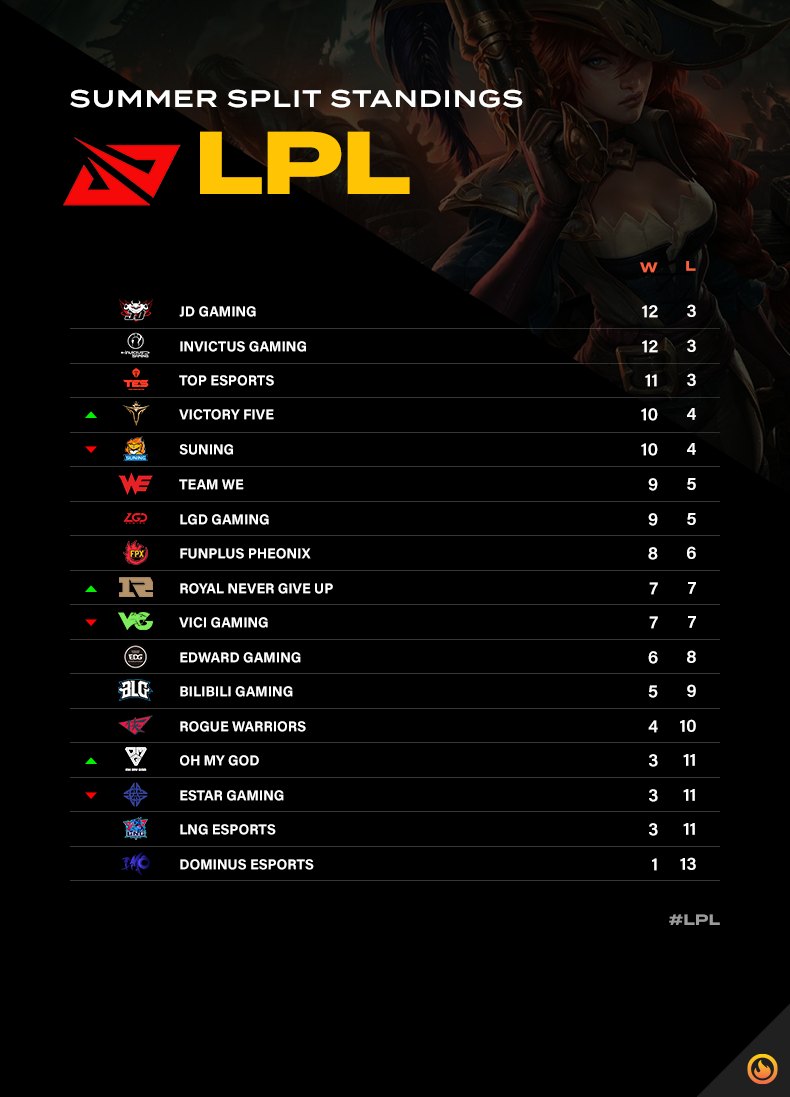 JD Gaming, Invictus Gaming, and Top Esports are all gunning for the top seed with three losses. Victory Five and Suning will try to move into the top four and secure a first round bye. Team WE and LGD Gaming can clinch a playoff spot with one win.

The bottom six teams have all been eliminated from the playoffs. This includes Rogue Warriors, whose mini-run came to a halt with losses to Bilibili Gaming and LNG Esports in week nine. FunPlus Phoenix are holding onto the last playoff spot for now, but Royal Never Give Up and Vici Gaming are close behind.

Top Esports will be hoping they will be wrapping a regular season championship, while Team WE will be hoping they’ve already qualified for the playoffs. There may not be a bigger mismatch between playoff mid laners in Zhuo “knight” Ding over Jiang “Teacherma” Chen, but we’ve seen team coordination trump talent many times before. WE will play through Zhao “Jiumeng” Jia-Hao, which would ordinarily be tough against Yu “JackeyLove” Wen-Bo, but the TES bot lane has struggled recently. This will be a good test to see how they respond.

Though they’re looking better and better with GimGoon, the 2019 World Champions still have not secured their playoff spot yet. Suning have, but they’ll be wanting to try to break into the top four to earn a playoff bye. Suning want to run their team through Tang “huanfeng” Huan-Feng, while FPX go through Kim “Doinb” Tae-sang and Gao “Tian” Tian-Liang. FPX have obviously come up clutch in big matches, so it wouldn’t be a surprise to see their second half streak continue.