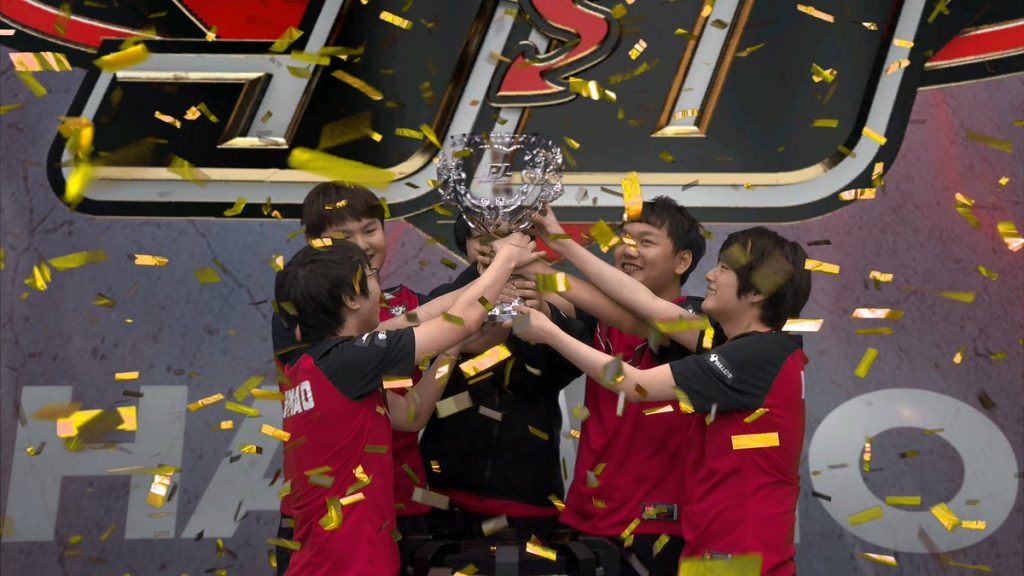 After a tumultuous season that required an extended break due to the coronavirus, the 2020 LPL Spring Split finally had their final match. JD Gaming earned their spot after a 3-0 win over FunPlus Phoenix. Top Esports made it after upsetting the regular season champions Invictus Gaming 3-1.

JD Gaming came out on top of an epic five games series 3-2 to clinch their first LPL title. Their win over TES makes them arguably the best team in the world as they head into the Summer Split.

JD Gaming were on an incredible tear to reach the finals. JDG were winners of 15 consecutive games since Zhang “Zoom” Xing-Ran returned to the starting lineup from quarantine. Though Top Esports would snap that streak, JDG still got the 3-2 win in an epic LPL finals.

JDG opened the series with a 12 kill to 4 win in game one. TES were up in gold for the majority of the game, but JDG found some crucial picks and won a dragon fight at 28 minutes to get back in it. Zeng “Yagao” Qi’s Leblanc finished 3/0/8 to win MVP in the opener.

TES bounced back in game two to become the first team to take a game off JDG with Zoom in 2020. Hung “Karsa” Hao-Hsuan’s Trundle and Zhuo “knight” Ding’s Viktor worked together in a pair of skirmishes to put JDG ahead early. Yu “JackeyLove” Wen-Bo took over from there, going 5/1/5 on Miss Fortune.

TES then put JDG on match point by winning game three. After finding a fight win, JDG started Baron only to immediately regret their choice. Knight used Corki’s Package across the entire team and JackeyLove’s Aphelios 1v3’d at low health to turn the fight for TES. They would go on to win 11 kills to 6 in 30 minutes.

Ladies, gentleman and everyone inbetween, @JDGaming are your Spring 2020 champions! #LPL pic.twitter.com/JePwKS8jFK

Games four and five, though, were all JDG. Lee “LokeN” Dong-wook and Zuo “LvMao” Ming-Hao took over the series. LvMao hit every Thresh hook and Bard Cosmic Binding, while LvMao had great positioning on Aphelios and Miss Fortune to take advantage. Spring MVP Seo “Kanavi” Jin-hyeok wasn’t at his most dominant, but he showed up with an impressive 3/0/8 Rek’Sai in game five to clinch the championship.

With their win, JD Gaming have staked their claim as one of, if not the best team in the world. They play in the deepest and most competitive region in the world, and now have won all 10 of their matches with Zoom in 2020 with a 22-2 game record. They extinguished the reigning world champions 3-0 — with their full lineup intact.

JDG’s most important move this off-season was to keep Kanavi. Though he earned the starting role to end 2019, he has blossomed into one of the top junglers in the world in 2020. With Zoom and LvMao already at or near the top of their own respective roles, JDG just needed more consistent jungle play to become a world class team. We saw glimpses of their potential in 2019, but that potential has now been realized.

This is JD Gaming’s first LPL title. They were beaten 3-0 by Invictus Gaming in 2019 Spring in their only other finals appearance.

No team had been better than JD Gaming since the return of Zoom, but Top Esports were the next closest thing. Since adding JackeyLove late in the season, TES won all five of their series on the way to the finals, including a 3-1 thumping of regular season champion Invictus Gaming in the semifinals.

Where Zoom was just a great mechanical upgrade for JDG, JackeyLove transformed TES’ team play upon his arrival. By taking over the shot calling, he unburdened Karsa and allowed him to get back to his own game. TES were also more decisive and cohesive in their plays.

Though they lost in the finals, that shot calling was still on display in game three. JDG had a 5v2 at Baron and thought they would easily secure the objective. Most teams would back off with only Corki and Aphelios alive, but JackeyLove made a different call. Knight used his Package across five, picking up a kill on Zoom’s Renekton before flashing to safety. JackeyLove knew his limits on Aphelios perfectly, kiting it out against the rest of JDG to pick up a 2v5 ace. TES took the Baron and stole game three away from JDG.

Unfortunately, they will lament their missed opportunities to close it out. JackeyLove and Zhang “QiuQiu” Ming were victimized in game four, allowing LokeN’s Aphelios to take over. Knight then lane swapped with He “705” Yu-Long in game five, wanting the Sylas into Ornn matchup for himself. An early gank set Knight behind, but he then forced an all-in on Zoom so hard that Knight died to two turret shots. A final gank by Kanavi put him at 0-3 7 minutes into the deciding game of the finals.

The loss will of course hurt when TES had two chances to clinch a title, but the future has never been brighter for the organization. With Karsa playing well again, TES seems to have finally solved the jungle issues that have plagued them for years. JackeyLove also only started to get real match time in the final week of the regular season, so the team still has room to grow together.

Their first order of business for the Summer Split is to figure out their support situation. Liang “yuyanjia” Jia-Yuan started in the regular season finale win over FunPlus Phoenix and both playoff wins over Team WE and iG, but QiuQiu then started all five games of the finals. TES will be better off if they can identify and stick with the support that better suits JackeyLove and the rest of the team next split.

It was all setting up for an LPL final for the ages. The first two Chinese world champions, Invictus Gaming and FunPlus Phoenix, were set up on opposite sides of the bracket in the semifinals. However, both fell in relatively quick series to put a disappointing end to their Spring seasons.

Invictus Gaming finished first in the regular season, going 14-2. Unfortunately, that earned them a matchup with Top Esports, a team that certainly would have finished higher in the standings if former iG ADC JackeyLove had been with them all season. JackeyLove got his revenge with a 3-1 win for Top Esports.

The bot lane for iG was not an issue during the series. Ding “Puff” Wang might not be JackeyLove, but he more than held his own in lane and in fights. His duo Su “Southwind” Zhi-Lin was a necessary upgrade on Wang “Baolan” Liu-Yi.

We will use the upcoming break to work on our mistakes and problems.

New challenges ahead and we will never give up!
We will keep on FIGHTING!

See you next in the summer split!

Kang “TheShy” Seung-lok had a terrible series, going 1/5/2, 0/5/0, and 2/6/0 in iG’s three losses. He and Lu “Leyan” Jue did not play well together, leading iG to sub in Gao “Ning” Zhen-Ning for their third place match against FPX. That didn’t go well for iG either, forcing them to sub Leyan back in for game three.

iG lost to FPX 3-0 and head into their break with more questions regarding their jungle position. Leyan has still undoubtedly been better than Ning, but can iG win titles without an upgrade in that role? That’s the question they will have to answer before Summer.

FunPlus Phoenix have roster question marks of their own after the playoffs. FPX never got Kim “Khan” Dong-ha fully integrated before the halt in play, so FPX looked better all regular season with Kim “GimGoon” Han-saem starting in top lane. GimGoon got all three games against JDG in the semifinals, and unsurprisingly, was outmatched by Zoom. After all, that’s the reason FPX got Khan in the first place.

Khan then subbed in for the third place match against iG and bullied TheShy into his aforementioned score lines. Khan is more talented, but he requires more resources. It’s great for FPX to have both great dominant and great weak side top laners, but they will have to decide on their team identity heading into Summer. As we saw with Khan during the regular season, it isn’t as simple as putting in a great player and watching it fall into place. The entire team must change the way it plays.

We’ll get our answers to these roster questions when the LPL resumes with the Summer Split. The LPL has yet to announce their start date, but the LCS, LEC, and LCK are all scheduled to start in mid-June.