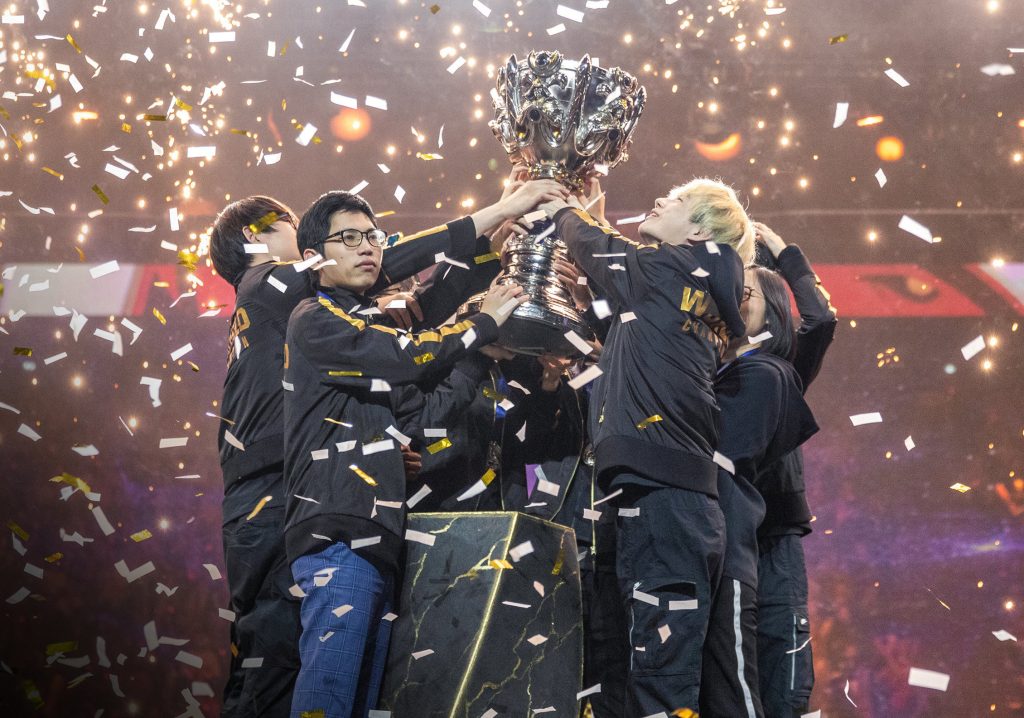 The series kicked off with signature FunPlus Phoenix play. Kim “Doinb” Tae-sang picked his favorite Nautilus mid and made use of him early, roaming as early as level 2. He turned around the top lane matchup for Kim “GimGoon” Han-saem by ganking Martin “Wunder” Hansen’s Ryze repeatedly, including picking up First Blood in the series.

Watching without looking at the gold charts, you would have assumed FPX were running away with game one. But G2 Esports had a number of impressive map plays, highlighted by turning an FPX dive bot lane into a strong Rift Herald push from top outer turret to the inhibitor turret. G2 took a small 1k gold lead at 30 minutes despite being down four-kills-to-seven.

G2 continued their map play by securing the first infernal spawn, but FPX didn’t let it go for free. Lin “Lwx” Wei-Xiang Sivir ulted the team and Doinb caught Mihael “Mikyx” Mehle for the first kill of the fight. Tian knew FPX had the fight from there and wrapped around behind G2 to cut off their escape. Marcin “Jankos” Jankowski tried to buy time for Luka “Perkz” Perković to get away, but Tian lined up a beautiful Lee Sin R – Dragon’s Rage to secure two more kills for FPX.

FPX followed by securing Baron to take their first meaningful lead of the game. G2 countered with an impressive move top lane to take an inhibitor and slow FPX down, but another Baron and Elder Drake allowed FPX to take control of game one. A final fight in G2’s base secured the 22 kills-to-7 win for FPX in 40 minutes.

GimGoon’s Gangplank finished 5/0/12 despite the disadvantageous matchup in Ryze and Elise. Lwx’s six-item Sivir finished 11/0/5. Wunder never recovered after the early pressure and ended the game 1/7/2.

G2 made the first big move of game two, sending four members to the early infernal drake spawn and secured it despite Jankos lacking smite. FPX didn’t get there quickly enough to pry away the objective, but they did pick up three-kills-for-one in the aftermath, including two kills and an assist to Lwx’s Kai’Sa. An early scaling advantage to G2 given for early gold to FPX.

.@G2esports get the Infernal Dragon, but @FPX_Esports get first blood and two more in response! #Worlds2019 pic.twitter.com/c91cCGedD1

FPX pushed their lead by taking Rift Herald and turning it into the first turret kill of the game. Another skirmish at 14 minutes resulted in another two kills for FPX as they opened a 4k gold lead. Two more kills, a cloud drake, and the earliest Baron of the entire 2019 Worlds tournament put FPX in a commanding position at 21 minutes.

A pause put a momentary damper on their momentum, but FPX picked up where they left off quickly afterward. G2 tried to make a pick on Crisp in their bot jungle, but his Stopwatch bought enough time for the rest of FPX to collapse. Lwx cleaned up with a triple kill and FPX picked up a five-kills-for-one ace. That fight win allowed them to kill G2’s mid inhibitor turret to open up the base.

.@FPX_Esports ACE @G2esports again and put themselves one win away from winning the 2019 World Championship Finals! #Worlds2019 pic.twitter.com/B8vFBL5u9A

The opening to game three was the quietest of the series, but that didn’t mean FPX were not getting things done. FPX forced Perkz flash level one and took advantage of him in lane, forcing him off turret by threatening dives with Tian and collecting turret plates. A roam down by Doinb at 7 minutes gave FPX the rest of the turret, giving FPX the earliest first turret take of the tournament.

FPX swapped their bot duo up top lane, using their advantage to push more turret plates. Tian then dropped Rift Herald top and FPX pushed down their second turret of the game. FPX already secured two full turrets, an ocean drake, a mountain drake, and a 2k gold lead at 12 minutes without First Blood on the board.

That First Blood didn’t come until 14:20 — and, surprisingly — went to G2 Esports. The First Blood King Jankos picked up the killing blow after Tian’s Lee Sin got CC-chained near G2’s mid turret. Despite the huge early game lead, G2 kept the gold lead at 2k in the mid-game to keep their hopes alive.

FPX again secured the first Baron, but their G2 repelled their push with minimal losses. It was what happened after the Baron buff expired that broke the game open. G2 tried to collapse on Doinb top at 25 minutes, but Tian was setting a trap. He and Doinb singled out Rasmus “Caps” Winther to start the fight, setting FPX up to clean house. They also picked up Wunder and Perkz to give them the space to take top inhibitor and open a 6k gold lead.

Now in full command, a second Baron take at 29 minutes put the finishing touches on the series. FPX burned down the objective as G2 were unable and unwilling to face check into the fog of war. Now too close to FPX, Jankos, Caps, and Mikyx were run down to give FPX a four-players-to-two numbers advantage with super minions streaming into G2’s base.

FPX went for the win. Perkz picked up kills on Tian and GimGoon, but Doinb and Lwx had enough damage to finish. FPX finished the last Nexus of the 2019 season at 30:22 to secure their first World Championship. 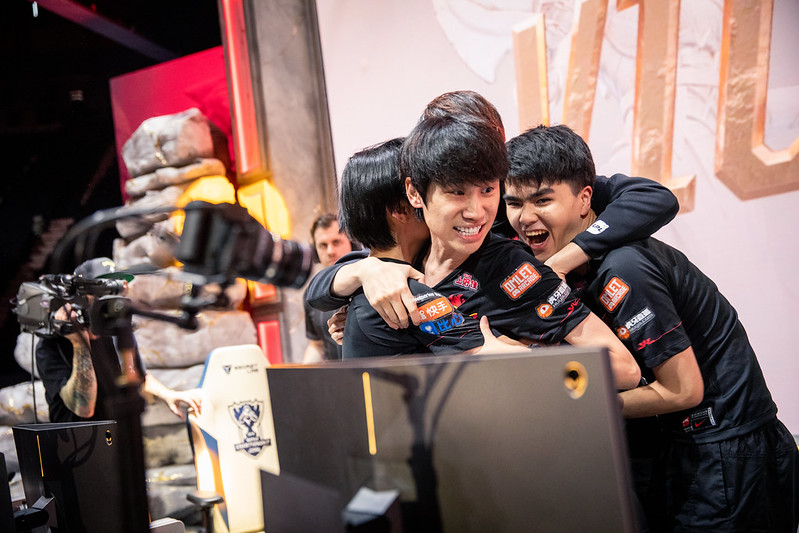 FPX did what SKT could not: closeout leads against G2 Esports to win the Worlds 2019 Finals (Photo via Colin Young-Wolff/Riot Games)

On Thursday, October 17, FunPlus Phoenix were facing elimination in what was widely considered the softest group at the World Championship. 24 days and 12 wins later, they are World Champions. It’s a remarkable run from a team that looked overwhelmed and overhyped to start the tournament, not resembling the team that had just had the third-best winning percentage in LPL history.

FPX did what SK Telecom T1 could not: closeout leads against G2 Esports. FPX won all three early games — even if G2 made impressive plays in the mid-game. But FPX used those early leads to ensure they could get to a point where they could force G2 to react to their five-man plays. Even when G2 finally picked a competing team fight composition in game three, FPX were just the superior fighters.

Doinb was once again the engine that the team runs through, and Tian was once again their best player and series MVP, but credit must go to ancillary carries GimGoon and Lwx. GimGoon twice played Gangplank into Ryze and twice left lane unpunished. Lwx positioned perfectly throughout the series, knowing when to dive in head-first and when to kite in the back line. Liu “Crisp” Qing-Song outclassed LEC standout Mikyx throughout the series, hitting game-changing hooks and teaming up with Doinb and Tian to control the map. FPX are one of the most impressive displays of a team fitting together seamlessly in League of Legends history. 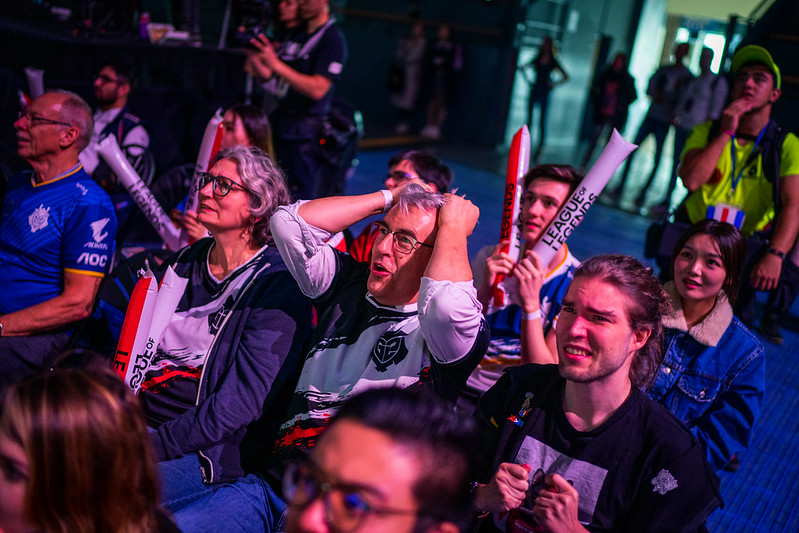 G2 were never able to gain traction in the side lanes, which ultimately cost them (Photo by Michal Konkol/Riot Games)

This was supposed to be the breakthrough for Europe. G2 Esports were coming off a 2019 sweep. They won the Spring Split. The Mid-Season Invitational. The Summer Split. They knocked off SK Telecom T1 and Lee “Faker” Sang-hyeok, the best player in the history of the game. They were the best team the LEC has ever produced and were playing on home soil in front of a rabid fan base.

Unfortunately, the poor early games that plagued them against SKT doomed G2 against FPX. G2 got solo lane counter picks whenever they wanted them against FPX, but it mattered little in the series. FPX were never interested in fighting 1v1 in lane, preferring to shove lanes and create odd-numbered advantages for themselves. G2 never found a way to counter-attack during the laning phase, instead, allowing themselves to fall behind and hope to pick up the pieces in the mid-game.

Their mid games were again good. They clawed back to a gold lead in game one and stalled game three longer than FPX would have liked. But keeping pace in the mid-game only matters if you can pull out the later team fights, and G2 could not. Their compositions never favored them in those scenarios, but they also never got traction on split pushes against GimGoon. G2 have great mechanical players that were forced into situations that didn’t allow them to express that skill.

That’s why FunPlus Phoenix are the 2019 League of Legends World Champions.