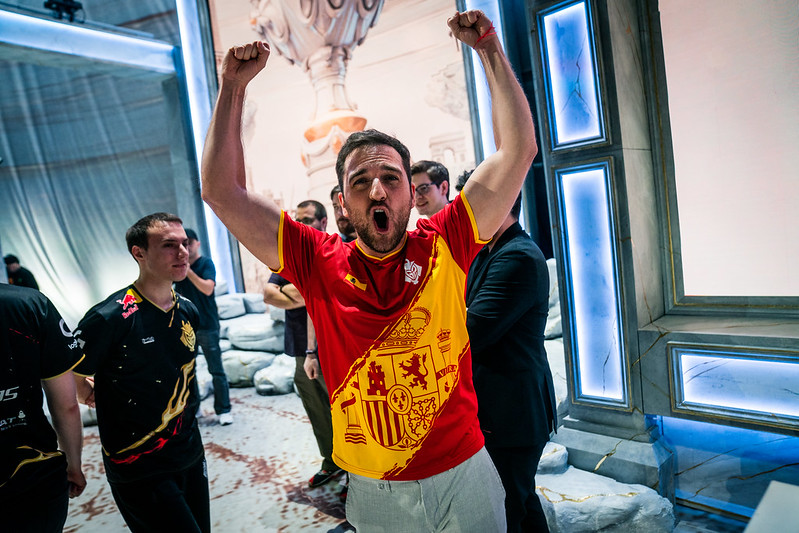 G2 Esports get a rematch with MAD Lions after their 3-1 win over Origen. (Photo courtesy Michal Konkol - Riot Games)

Two of the top three teams in the 2020 League of Legends European Championship (LEC) Spring Split met in an elimination match earlier than they expected. Both Origen and G2 Esports lost in Round 1 to put the pressure on this Round 3 series.

G2 Esports will get their rematch with MAD Lions after a close 3-1 win over Origen. The two will play for a fight to face Fnatic in the finals. Origen dropped out of the playoffs in fourth place.

Bot lane priority was the name of the game in the opening draft. Origen used their blue side first pick on Aphelios, while G2 Esports immediately countered with Ezreal and Yuumi. OG then rounded out their bot lane with Nautilus on their next pick. With OG picking Aatrox in the first half of the draft, both Martin “Wunder” Hansen and Luka “Perkz” Perković got to pick their lane matchups. Wunder went for the scaling of Maokai into Aatrox, while Perkz got more aggressive with Leblanc into Azir.

It doesn’t matter what champion Marcin “Jankos” Jankowski is on. He’s still the First Blood King. Jankos’ Trundle visited Erlend “Nukeduck” Våtevik Holm’s Azir to set up Perkz for First Blood at five minutes. Jankos continued to make an early impact on a champion not known for it, re-ganking Nukeduck for another kill and helping to shut down Barney “Alphari” Morris for three successful ganks in 10 minutes.

The fun started for G2 when Rasmus “Caps” Winther’s Ezreal finished his Muramana and Trinity Force. Coupled with Mihael “Mikyx” Mehle’s Yuumi, Caps was a one-man poke squad. He had Maokai and Trundle to stand in front of him, Yuumi by his side, and Perkz’ Leblanc to full burst anyone left. With their scrappy skirmishing squad, G2 took a 14 kill to 4 advantage by 22 minutes and secured their first Baron. Perkz already had a full 25 stacks on his Mejai’s Soulstealer.

You don't challenge the king.

Origen fought back to bring the gold back to even at 32 minutes, but G2 rushed down Baron to get the advantage. Caps deleted Elias “Upset” Lipp’s Aphelios to get it started, but he wasn’t done. Caps killed Origen one-by-one, eventually chasing down Alphari top lane to earn the pentakill for G2. They ended the game up 21 kills to 11 in 33 minutes for the game one win.

With Sett left open in game two, Origen changed their priority and grabbed him for Xerxe with their first pick. That left Aphelios in Caps’ hands. G2 coupled him in lane with Thresh and drafted more great peel in Neeko and Zilean. Origen had a great team fight composition with Maokai, Sett, Azir, Miss Fortune, and Nautilus, but their lack of strong primary engage could prove problematic in getting those fights.

G2 spent a lot of early resources going after bot lane. Not every play worked out, but it was clear that they wanted to get Caps ahead on his Aphelios. Perkz roamed bot several times and Jankos spent most of his early game forcing dives on OG’s bot.

However, Origen were firmly in control of the game at 30 minutes. G2 had secured the first three drakes with their early game lead, but OG were winning the important team fights in the mid game. G2 picked off Nukeduck’s Azir to go for Ocean Soul, but OG fought them 4v5 and still came out on top. Nukeduck eventually rejoined with teleport and OG picked up the ace and denied Ocean Soul from G2.

OG had a 4.5k gold lead and had pushed down two of G2’s inhibitors when they went for a teleport flank on G2. Unfortunately, the gold lead doesn’t matter much if you can’t kill the almost six item Aphelios. Caps shredded through OG with the help of Perkz’ Zilean and G2 won the fight and secured Baron.

Now with Baron and their inhibitors respawning, G2 felt comfortable to push out mid. OG engaged them there, but they could do nothing to kill the now six item Caps. Caps picked up a quick triple kill before a Perkz double bomb double kill denied him a second pentakill in as many games. G2 pushed through to OG’s Nexus to complete the comeback and win 23 kills to 20 in 41 minutes. Caps finished 10/5/9.

Still on blue side, Origen liked their first rotation from game two enough to pick it again in game three. Sett, Miss Fortune, and Nautilus were all picked again to provide a similar compositional feel. OG banned Aphelios this time, pushing Caps onto Varus. Origen went for more early power in their solos this time, picking up Renekton for Alphari and Leblanc for Nukeduck. Perkz got the final counter pick of the game and opted into Zoe.

Origen had the early lead in game three, but G2 showed how annoying they can be from behind. Mikyx’s Tahm Kench was killed at 21 minutes with Infernal drake up. That should have been a free objective to OG, but G2 wouldn’t give up that easily. Wunder cut the mid wave behind OG’s mid outer turret, baiting Upset to chase him. OG picked up the infernal drake, but it also cost them two kills and a mid turret for their trouble.

Origen looked like they couldn’t figure out how to crack G2 open until they finally found their pick at 28 minutes. Perkz was caught rotating from top to mid in his own jungle and OG used that to pick up two more kills and their first Baron.

Even though they used that to push down turrets and extend their gold advantage, it still looked like G2 would come back. OG used a 3-1-1 split push with Baron, but their three-man squad mid got overeager and dove G2’s turret. Xerxe’s Sett fell, and G2 suddenly had the numbers advantage just as the Infernal drake spawned. Sitting on three elemental drakes already, G2 were gifted Infernal Soul at 32 minutes.

But OG had one more great team fight left. Destiny hooked Mikyx mid lane, and though he died first, OG were ready with the follow up. Xerxe got a great The Showstopper to group G2 up for Upset’s Bullet Time and OG used their fight win to take Baron and Elder Drake. With those objectives, OG were finally able to close out the game. They stayed alive with a 24 kill to 11 win in 40 minutes. Upset finished a perfect 8/0/7 on Miss Fortune.

With Origen picking up a win, G2 Esports went to a more team fight focused composition in game four. They picked Ornn for the first time, pairing him with Taric for a beefy frontline. Caps took away Upset’s Miss Fortune in the first rotation, forcing Upset down the tier list onto Kai’Sa. Nukeduck picked Cassiopeia blind, allowing Perkz to final pick Akali. Both teams had plenty of scaling, but G2 definitely had the advantage of picking and choosing when to engage.

One solo kill? Nah, how about two in a row?

The individual outplays were on full display in game four. Nukeduck’s Cassiopeia kicked things off by solo killing Perkz mid lane, but Perkz’ Akali got his revenge by returning the favor to Upset’s Kai’Sa minutes later. Jankos’ Olaf then ran down Nukeduck mid lane for a third solo kill in the first 12 minutes of game action.

A very extended fight around Baron at 24 minutes eventually resulted in a four for one win for G2, giving them the first Baron of the game. OG picked Perkz on his resulting split push, but G2 still picked up valuable turrets and gold on the push.

With Baron up at 31 minutes, both teams went mid lane to try to push the wave out and get control of the map. Using their long range engage, Wunder’s Ornn started a fight with Call of the Forge God. Xerxe dropped first, allowing G2 to start Baron. OG contested, but G2 rushed it down before Xerxe could rejoin. With the chase down potential of Akali and Olaf, G2 picked up four kills on OG to end their hopes of extending the series. G2 teleported straight into OG’s base to end the game up 20 kills to 13 in 32 minutes.

G2 will have a week to prepare for their rematch with MAD Lions. The two meet for a chance against Fnatic in the finals on Saturday, April 18th at 8 a.m. PST.