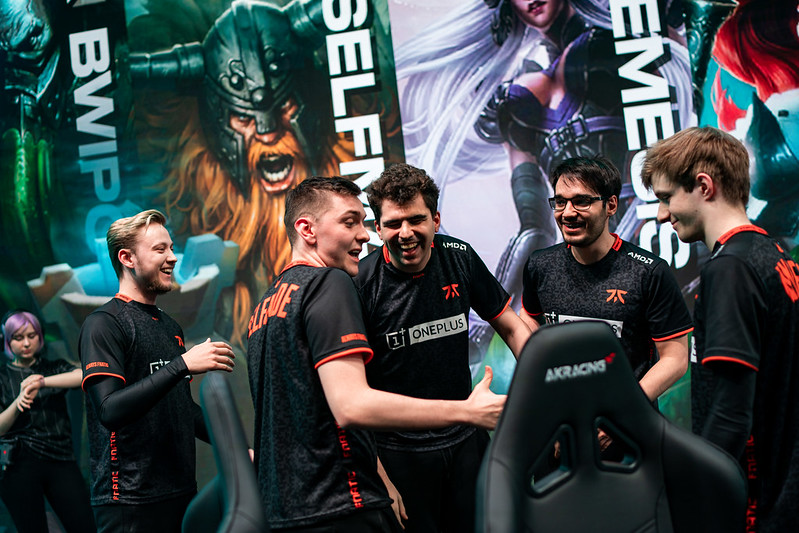 The two teams to finish the 2020 LEC Spring Split with a 13-5 record found themselves as opponents in round 1 of the playoffs. Fnatic earned the second seed over Origen via a schedule tiebreaker, but all it amounted to in this series was an extra side selection. First seed G2 Esports picked MAD Lions over Origen as their round 1 opponent.

Fnatic showed why they ended the season ahead of Origen, winning 3-1 in a relatively one-sided series. Origen fought back after nearly losing in a perfect game in the opener, but Fnatic proved to be too tough to beat. They will advance to the semifinals, while Origen move to the Loser’s bracket.

Fnatic were dominant in the opener of the series. It started with an early skirmish top lane at seven minutes. Gabriël “Bwipo” Rau’s Zac engaged on Barney “Alphari” Morris’ Gangplank and Andrei “Xerxe” Dragomir’s Trundle as Oskar “Selfmade” Boderek’s Gragas and Tim “Nemesis” Lipovšek’s Yasuo made their way up the river. When they arrived, Fnatic were able to dive Alphari and Xerxe between their top turrets, picking up the first two kills of the game.

Fnatic were already up six kills to zero at 18 minutes when Origen tried to catch out Martin “Rekkles” Larsson’s Senna. They were eventually successful, but not before Zdravets “Hylissang” Iliev Galabov’s Zilean stalled with his ult, giving the rest of Fnatic time to collapse on the fight. Origen killed Rekkles to end the threat of a perfect game, but Fnatic picked up four more kills and upped their gold lead to 8.5k.

With such a gold lead so early, plus good scaling from Zac, Yasuo, and Senna, it was just a matter of securing the neutral objectives to close the game out for Fnatic. They took Ocean Soul at 25:30 and started Baron at 26 minutes. Origen made their last stand, causing Fnatic to pull off. They won that fight three kills to zero and used that numbers advantage to storm down the base without Baron. Fnatic won 14 kills to 1 and conceded no turrets in 27 minutes. That kill on Rekkles in the mid game was the only thing preventing them from a perfect game.

The start to game two looked very familiar to game one. Xerxe was first to the top lane, but Fnatic were able to send more members. Bwipo once again kicked off the fight 1v2, this time engaging with Ornn’s Call of the Forge God. Selfmade’s Lee Sin arrived in time to shield Bwipo before picking up the kill on Xerxe’s Olaf. Alphari’s Gangplank made it out, but Fnatic once again won the early top lane skirmish.

Fnatic then attempted a bot lane dive at 12 minutes. Elias “Upset” Lipp’s Ezreal and Mitchell “Destiny” Shaw’s Yuumi were slippery enough to stall for Origen to collapse, and Selfmade fell underneath OG’s bot turret. That led OG to continue chasing the rest of the Fnatic. Bwipo and Aphari teleported down, but the ultimate timers made all the difference.

Call of the Forge God was up for Bwipo, but Cannon Barrage was not for Alphari. With that big ultimate, Fnatic turned the fight around, landing CC chains on Erlend “Nukeduck” Våtevik Holm’s Rumble and Xerxe. Fnatic then chased down the rest of OG, including killing Upset and Destiny under their bot turret. At the end of the play, they were up six kills to two and took a 2k gold lead.

With that lead, Fnatic nullified OG’s early dragon stacking and started taking them for themselves. Fnatic took the next two infernal drakes, Baron, and total control of the game. Origen made their last stand in their base at 28 minutes, but Nemesis picked up a triple kill and Fnatic ended the game. They won game two 19 kills to 6.

As dominant as Fnatic were in the opening two games, Origen bounced back in game three. OG picked up 8 of the first 10 kills of the game and opened a 3k gold lead at 15 minutes. Xerxe was much more active on Gragas and it showed. He participated in seven of those first eight kills.

With a gold lead and the scaling advantage, Origen had no problem picking up Baron at 24 minutes. Fnatic knew they could not contest, so they sent Hylissang’s Trundle to split push. Bwipo eventually teleported to trade bot inhibitor for Baron, but sacrificed his life for it.

Though they were so far ahead, OG’s slow, methodical pace dragged the game out for a bit. Hylissang’s support Trundle was a nuisance as a split pusher, especially because he had items from farming early with Senna ADC. OG even had to give up the next Baron to Fnatic just to stop Hylissang from pushing down their base.

Still, Origen secured Mountain Soul at 36 minutes and could undoubtedly win team fights. Fnatic were drawn into one with Elder Drake spawning, and OG finally had Fnatic where they wanted them. OG picked up the clean ace at 42 minutes to go up 29 kills to 6 and secure game three. Upset finished a perfect 9/0/9 on Aphelios in the win.

Origen looked prime to force a game five. Xerxe’s Rek’Sai visited top twice early to set Bwipo’s Aatrox behind. Meanwhile, Origen’s bot lane picked up a 2v2 double kill to get themselves ahead early as well at seven minutes. Origen extended their lead to nine kills to two at 21 minutes with a 5k gold lead.

Origen started Baron at 27 minutes, looking to force a fight. Destiny’s Thresh hook caught Selfmade and OG peeled off to kill him in Fnatic’s top jungle. After Selfmade got over the wall, OG backed off — except for Upset. Fnatic collapsed on Upset, killed him, and then ran down the rest of OG. They picked up four kills for zero, got Baron, and erased OG’s entire gold lead in one play.

What do we say to the Silver Scrapes? pic.twitter.com/48YqwiebK1

Origen made another mistake at 29 minutes. Nukeduck’s Rumble walked too far up to try to clear the Baron minion wave on OG’s bot inner turret. Bwipo CC chained Nukeduck, allowing Fnatic to burst him down and dive the rest of OG. Fnatic used that fight win to pick up two inhibitors and blow open the game.

Fnatic picked off Upset again at 30 minutes, leading to them taking down OG’s third inhibitor and both Nexus turrets. OG held onto their Nexus on that push, but there was little OG could do when Fnatic regrouped once more. Armed with Baron and three super minion waves, Fnatic just rushed down OG’s Nexus at 34 minutes to take the game and series. They were still down 13 kills to 14 as the Nexus fell.

Misfits Gaming will take on Rogue in the next match of the LEC playoffs. Their series will kick off on Sunday, April 5th at 8 a.m. PST.