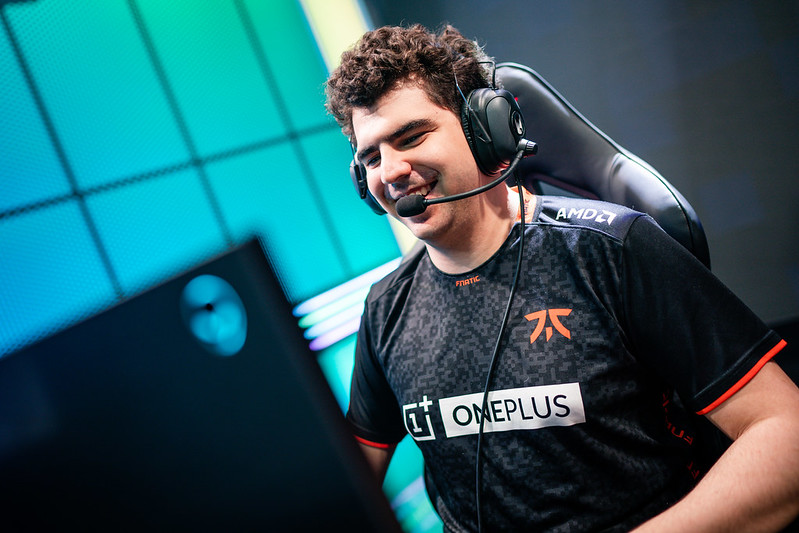 Fnatic earned their spot in the LEC finals with a 3-0 thrashing of MAD Lions. (Photo courtesy Michal Konkol - Riot Games)

The two remaining undefeated playoff teams met in the semifinals of the 2020 League of Legends European Championship (LEC) Spring Split for a spot in the finals. Fnatic comfortably beat Origen 3-1 to get here, while MAD Lions upset G2 Esports 3-2.

There would be no upset this time as Fnatic crushed MAD Lions 3-0 to sweep them down to the lower bracket. MAD will take on the winner between G2 Esports and Origen for another shot at the finals. Fnatic get a full eight days of preparation before their next series in the finals.

Fnatic made an interesting decision to prioritize Senna over both Ornn and Aphelios for blue side pick one. MAD Lions snapped them up on the red side, taking the three power picks out of the game. Gabriël “Bwipo” Rau went away from trying to bully Ornn in lane and instead matched his tank scaling by picking Maokai. Marek “Humanoid” Brázda opted for Zoe into Tim “Nemesis” Lipovšek’s Azir to round out the draft.

Fnatic took the first three turrets of the game and had a nice little 3k gold lead at 22 minutes. Nemesis moved top to look for a pick on Humanoid and got it. Despite Humanoid’s flash, Nemesis solo killed him with ease. Zhiqiang “Shad0w” Zhao’s Lee Sin attempted to trade the kill back, but Shad0w missed the Sonic Wave after his Dragon’s Rage kick. Oskar “Selfmade” Boderek then had time to make his way top to kill Shad0w.

With those two kills, Fnatic walked over to Baron and took it uncontested. That pushed them to a 5k gold lead at 22:30. Fnatic moved to a 4-1 split push, allowing Nemesis to take MAD’s top inhibitor turret while the rest of the team took bot inner turret.

Matyáš “Carzzy” Orság and Norman “Kaiser” Kaiser were desperately trying to push out the mid wave when Bwipo teleported behind them at 29 minutes. Bwipo and Selfmade took out Carzzy while Nemesis killed Kaiser’s Zilean twice to give Fnatic the picks they needed to end the game. Fnatic took game one 10 kills to two in 30 minutes. Nemesis finished 5/0/2 and Martin “Rekkles” Larsson’s fasting Senna finished 0/0/8.

Things got a little more interesting in the game two draft. Nemesis blind picked Yasuo in the first rotation, but Fnatic made sure to surround him with knock ups. They picked Gragas for Selfmade, Blitzcrank for Zdravets “Hylissang” Iliev Galabov, and a last pick Press the Attack Malphite for Bwipo. Humanoid and Andrei “Orome” Popa showed flex picks Nautilus and Aatrox, eventually settling on Aatrox top and Nautilus mid. With Kaiser’s Thresh, this game featured three of the four hook champions in the game, missing only Pyke.

It was a much better start for MAD in game two, with Shad0w’s Olaf active on the map immediately. He first visited mid at 2:40 to hand Humanoid First Blood on Nemesis. Kaiser’s lantern bot then set him up for the kill on Hylissang. Fnatic took Ocean drake at six minutes, but MAD picked up two kills on the back end. A two kill dive bot at seven minutes put MAD a huge 2.6k gold up so early into the game.

Fnatic pulled back at an Infernal drake fight at 18 minutes. Bwipo teleport flanked behind MAD, and Hylissang hit a great flash hook onto Humanoid. Humanoid may have been playing a tank, but his Protobelt and Zhonya’s Hourglass made him very squishy and easy to burst down. Nemesis hit a knock up onto Orome to save Hylissang and Fnatic took a huge four kill to zero team fight to even the gold.

Fnatic then picked up another four kill skirmish win at 21 minutes to set up a free Baron. With their early lead gone, MAD’s Olaf and AP Nautilus could not stand up to Fnatic’s composition in fights. Fnatic pushed down some turrets, secured drakes, and grabbed their final Baron at 28 minutes. MAD attempted to stop Fnatic from securing Infernal Soul, but Nemesis secured it and picked up a triple kill in the ensuing fight. A five for zero ace gave Fnatic the ability to push for the win. They ended game two up 27 kills to 15 in 30 minutes.

Fnatic clearly liked how their composition played out in game two. They went right back to the Malphite, Gragas, and Miss Fortune combo and swapped Thresh in for Blitzcrank. Their only real change was putting Nemesis on Tristana instead of Yasuo. MAD Lions switched it up by banning Aphelios on blue side and first picking Syndra for Carzzy. They also gave Orome Sylas into Bwipo’s Malphite for the high value ultimate steals.

We are your ADC's worst nightmare. pic.twitter.com/XxO0sEh71E

Unfortunately for Orome, Bwipo’s Press the Attack Malphite slapped him down in lane for First Blood at 2:50. Selfmade’s gank at four minutes sent Orome back to the fountain for the second time. Shad0w’s Olaf and Humanoid’s Renekton attempted to recoup a kill, but Fnatic’s bot lane roamed up to thwart it. With another numbers advantage, Rekkles’ Miss Fortune picked up a kill on Humanoid to put Fnatic up three kills and 1.2k gold at four minutes.

A five kill ace at Rift Herald, Ocean drake take, and several more picks and skirmish wins amounted to a 5k gold lead for Fnatic by 15 minutes. Considering the much better scaling and easier to execute composition from Fnatic, it was only a matter of time for Fnatic to close it out from this point.

Shad0w slowed Fnatic down by a minute or two by stealing Fnatic’s Baron attempt at 25 minutes. Fnatic still wiped the team fight, but without the buff were only able to push down one of MAD’s Nexus turrets. MAD then even picked up the first two kills on Fnatic in a fight for Elder Drake positioning at 30 minutes, but Rekkles was too fed. He, Hylissang, and Selfmade took the 3v5 and won it. Selfmade picked up Fnatic’s second quadrakill of the game and Fnatic closed the series with a 31 kill to 13 win in 31 minutes. Rekkles finished game three 12/0/11 and picked up the other aforementioned quadrakill.

One of the top three teams in Europe will go home in the next LEC playoff series. Reigning champions G2 Esports take on Origen in an elimination match on Sunday, April 12th at 8 a.m. PST.