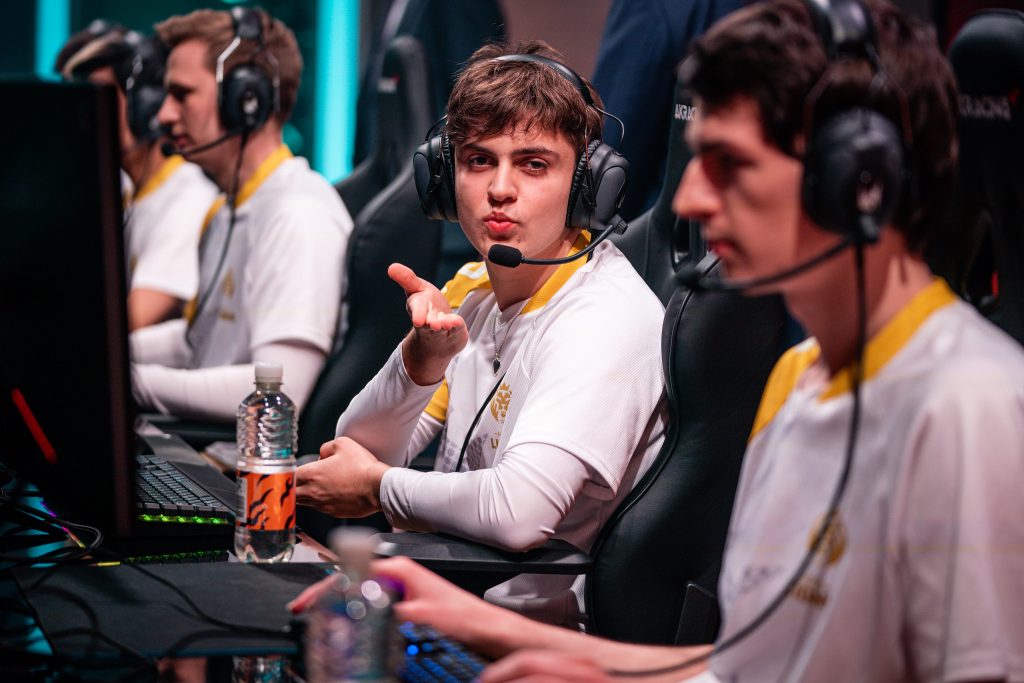 The MAD Lions thanked G2 Esports for picking them as opponents in round 1. (Photo courtesy Michal Konkol - Riot Games)

As the number one seed in the LEC playoffs, G2 Esports had the option to pick their Round 1 opponent. Third seed Origen were the team of seasoned veterans, and despite losing to MAD Lions in week nine, they had a better season-long record. Fourth seed MAD Lions were the team full of rookies. G2 chose to play MAD Lions.

G2 Esports may be regretting that decision after a shocking 3-2 upset by MAD Lions. MAD Lions advance straight to the semifinals, while G2 Esports will now fall to the Loser’s bracket.

MAD Lions didn’t look like a bunch of rookies in their playoff debut. It would be understandable for them to come out tentative in their first high-stake environment, but MAD were up to the task. It didn’t hurt that G2 Esports forced them into fights, either.

That started with a 2v2 mid at 4 minutes. Marcin “Jankos” Jankowski barely beat Zhiqiang “Shad0w” Zhao to the scene and picked up First Blood on Marek “Humanoid” Brázda. Seconds later, Shad0w evened up the kills by finishing off Luka “Perkz” Perković.

After a back-and-forth early game, the game was very even at 23 minutes. MAD Lions had a 300 gold and 10 kill to 9 lead, but G2 were up two dragons to one. The teams were posturing for vision control around Baron when G2 stepped a little too far into MAD’s top jungle.

Humanoid kicked it off with a Nautilus Dredge Line on Martin “Wunder” Hansen’s Maokai. At the same time, Andrei “Orome” Popa’s Aatrox channeled the perfect teleport flank to pincer G2 in the corridor. Matyáš “Carzzy” Orság’s Kalista was able to free fire the entire fight, shredding multiple members of G2 with his Runaan’s Hurricane and Blade of the Ruined King. MAD picked up three kills, secured Baron, and vaulted themselves to a 3.5k gold lead.

G2 had a couple of valiant base defenses to fight off MAD for a bit, but MAD broke them down after their second Baron to win game one. Carzzy led the team in kills, finishing 14/3/7. Orome finished with a perfect 6/0/10 score.

G2 wouldn’t be held down for long. At 3:30, Humanoid and Shad0w attempted to kill Perkz’ Rumble in bot river. MAD’s bot lane were the first to roam up, so they looked like they had the advantage in the 4v4. But G2’s early skirmishing power of Jarvan IV, Syndra, and Rakan trumped that of Kindred, Ornn, and Aphelios. G2 used that early power to pick up an early three kills and quick 2k gold lead.

With a Rift Herald deployed in bot lane, G2 already held a 5k gold lead as turret plates fell at 14 minutes. That’s generally enough to declare a game over, especially one as good as G2, but MAD kept their hope alive for a while. The same three champions that lost them the early skirmish all possess great scaling.

A fight at 25 minutes for dragon ballooned G2’s lead to 9k and essentially put an end to the game. Wunder hit a multi-man Sett Facebreaker, forcing MAD to clump in Shadow’s Lamb’s Respite. G2 then chased MAD down from there, picking up four kills and the dragon. It took ten more minutes to close it out, but that was just G2 playing with their food. They won game two 28 kills to 16 in 34 minutes.

With Rasmus “Caps” Winther looking comfortable on Syndra in game two, MAD banned it out in game three, pushing Caps down his champion list. He and G2 settled on Aphelios/Thresh. MAD flexed their Sett to support and picked Carzzy Ezreal into the matchup.

MAD had the better of the bot lane matchup immediately. The second before they hit level 2, Norman “Kaiser” Kaiser engaged with Facebreaker and Carzzy picked up First Blood in the straight 2v2. They would have killed Caps as well, but Jankos arrived just in time to save him and pick up a return kill on Carzzy. G2 actually ended up coming out ahead because Carzzy lost a couple of minion waves, but it showed the advantage MAD have in the 2v2.

That would be key to MAD securing the first three dragons of the game, setting themselves up for Soul point. G2 picked up the fourth but were unable to stop MAD from securing the fifth. However, G2 snuck a Baron right afterward to give themselves the gold lead.

A huge catch mid, in to Elder Dragon, a massive set of kills from @Carzzylol, and Baron pushes us in to control. #LEC #goMAD #MADWIN pic.twitter.com/wjU2NuDd42

With the buff, G2 pushed down MAD’s inner turrets to take a 4k gold lead at 37 minutes. But unfortunately for them, Caps got caught out mid lane by Humanoid and Carzzy right as Elder Drake was spawning. That 5v4 gave MAD Elder Drake, led to them picking up an uncontested Baron, which led to them ending the game. MAD aced G2 in their base to win 20 kills to 15 in 41 minutes.

It looked early like MAD Lions might win this series in four games. Shad0w’s Elise visited bot early twice, resulting in a pair of exchanges that favored MAD. Shad0w picked up First Blood, MAD came out ahead with three kills to two, Caps was denied CS, and Mihael “Mikyx” Mehle’s Yuumi picked up both of the kills for G2. Minutes later, Shad0w visited top and he can Orome’s Sett picked up kills on Wunder and Jankos.

With a Rift Herald taking top turret at 10 minutes, MAD had a ridiculous 5k gold lead. G2 had the superior scaling with Ornn and Cassiopeia, but they would have to get there. A fight at 13 minutes helped to give them hope. MAD collapsed on Jankos in his own jungle, but Perkz quickly responded and got a triple kill for himself.

The big turning point came at 20 minutes. MAD thought they were strong enough to force Baron at 20 minutes and were punished. G2 collapsed, picked up three kills, and took the Baron for themselves. Suddenly a 5k gold lead evaporated, and G2’s scaling allowed them to come back for the win. They forced a deciding game five after a 16 kills-to-11 victory in only 25 minutes.

MAD Lions were once again the better team in the early game. This time, however, they made sure to continue stacking their dragons and were rewarded with Ocean Soul, the most powerful in the game. That would be a very important piece to their win.

Once MAD had Ocean Soul, G2 knew their chances of winning straight team fights against MAD were basically over. That’s when they decided to start taking runs at backdooring MAD’s base. While MAD were occupied with Baron, Wunder’s Kalista eventually chipped MAD’s base down to a bare Nexus as Carzzy’s Syndra couldn’t keep him off it alone.

MAD grabbed Elder Drake at 32 minutes before transitioning to Baron. In the meantime, Mikyx’s Bard snuck his way through MAD’s bot side jungle to Portal into MAD’s base. Mikyx dropped a ward, Caps’ Ziggs respawned and teleported, and the backdoor was on.

Mikyx and Caps went for the end. With a Sheen, Caps was throwing spells out to maximize his damage on the Nexus. As he exhausted his other spells, Caps threw the Satchel Charge on top of himself and displaced himself, losing him auto attack uptime. MAD barely backed in time to kill him and hold onto their Nexus.

After their bot inhibitor respawned, MAD finally left their base again. Shad0w took what looked like a Bard Portal to his death at Baron pit at 38 minutes, but the Ocean Soul had other ideas. He and his 14 kill Olaf with nearly full items survived flying into all five members of G2 long enough for the rest of his team to arrive. When they did, they wiped G2, acing them to take the game and series. MAD won 34 kills to 13 in 39 minutes, averaging almost a kill per minute in taking down Europe’s top team.

Fnatic and Origen square off in the next match of the LEC playoffs. They play Saturday, April 4th at 8 a.m. PST.