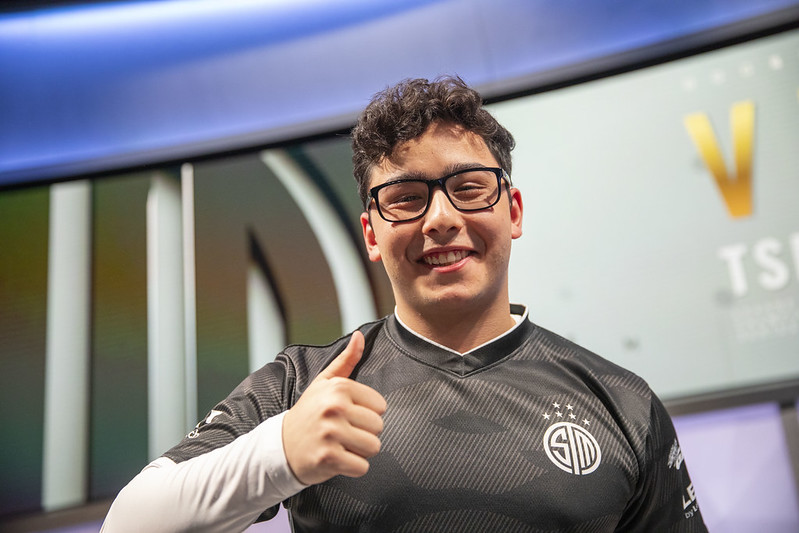 The third week of the League of Legends Championship (LCS) 2020 Spring Split has concluded. Cloud9 continue their dominance with another 2-0 week, while Team Liquid look to be in serious trouble after falling to 2-4. We take a look at where things stand in the LCS by looking at the top story lines so far in North America.

TSM Back on Track

A pair of ugly losses to open the season against Immortals and Team Liquid didn’t inspire faith in TSM. They had the same mid game woes that plagued them throughout 2019. Dominant laners meant nothing if the team could not convert their leads and learn how to play together.

Week two brought more promise after wins over Evil Geniuses and Counter Logic Gaming. They are two of the bottom four teams in the LCS, but wins were progress. Joshua “Dardoch” Hartnett was stepping up as the big-time engage jungler that TSM has been searching for since letting Dennis “Svenskeren” Johnsen go.

But the wins over Dignitas and Golden Guardians in week three signal that TSM is back. Dignitas had been one of the best teams in the LCS until they played TSM. Søren “Bjergsen” Bjerg dwarfed Henrik “Froggen” Hansen in CS despite Froggen getting to last pick his Vel’Koz. When it mattered most, TSM’s team fight synergy was on point, as evidenced by a ridiculous wombo combo to break open the game.

Notice how perfectly Dardoch immediately uses his Sett The Show Stopper to ULT Heo “Huni” Seung-hoon away from TSM. Dardoch then hit a four-man Facebreaker to stun most of Dignitas and set them up for Sergen “Broken Blade” Çelik’s Vanguard’s Edge and Kasper “Kobbe” Kobberup’s Bullet Time. Bjergsen’s Scatter the Weak wasn’t too bad either.

TSM followed that win up with a dominant win over Golden Guardians. Bjergsen played one of the best Ornns we’ve seen so far in the LCS, consistently hitting multiple members of GGS with Call of the Forge God. Broken Blade finally got to show off his Qiyana mechanics and he did so in style, creating picks to allow TSM to run away with the game.

None of this even mentions Vincent “Biofrost” Wang, who is the best mechanical and engage support TSM have had since…Biofrost. With him and Kobbe offering the sort of consistency that the Andy “Smoothie” Ta and Jesper “Zven” Svenningsen could not last year, TSM are looking like a contender in the LCS again. Cloud9 has been absolutely dominant, but Team Liquid are looking vulnerable in a way they haven’t in over two years.

TSM will get their shot at C9 to open week four before facing off against the 3-3 FlyQuest.

Time for TL to Panic?

You never want to overreact to small sample sizes. When Team Liquid lost to Cloud9 to open the season, there were plenty of excuses. The team was missing Mads “Broxah” Brock-Pedersen. Substitute jungler Shern “Shernfire” Tai only got a visa of his own days before the game. As it turns out, Cloud9 is the best team in the league through three weeks.

There was less to excuse in the week two loss to Team Dignitas, but it’s a long season and Dignitas were looking really good. Even after ending week two at 2-2, it still seemed like Team Liquid would be the team to beat in the LCS. But after back-to-back losses to 100 Thieves and Golden Guardians in week three? That’s a problem, and not all of it can be blamed on their sub jungler or early season struggles.

Kim “Ssumday” Chan-ho smashed Jung “Impact” Eon-yeong in TL’s loss to 100 Thieves. Impact has had lulls during some points in his career — notably 2019 Spring — before coming back to crush MSI and the rest of the year, so it might not be a problem. But it’s been a while since we’ve seen Impact so far on the losing end of a matchup.

Even more problematic is TL’s Peter “Doublelift” Peng and Senna problem. Namely, TL keeps picking Doublelift Senna and it keeps going poorly. It’s not like NA as a whole has been doing much better on the champ, as she is 6-14 through three weeks, but Doublelift is four of those losses and zero of the wins.

Looking specifically at the Golden Guardians game, there are a lot of red flags. Yuri “Keith” Jew has struggled through his position change with the most deaths in the LCS, but TL’s bot lane made him look like a top tier support. Keith picked up First Blood on Doublelift in the 2v2 and he and Victor “FBI” Huang absolutely outlaned Doublelift and Jo “CoreJJ” Yong-in. Add in Doublelift’s curious decision to forego Youmuu’s Ghostblade for Mortal Reminder, and you have to wonder how comfortable Doublelift is on the champion.

The good news for Team Liquid is that Broxah finally has had his visa approved and help is on the way. Shernfire had some of the lowest jungle proximity and ganking stats as a jungler in the LCS, so maybe Broxah will come in and help the lanes get rolling early. But Broxah’s addition won’t solve every problem, and TL know they need a wake up call.

ZVEN Dies…But at What Cost?

It was 23 minutes into Cloud9’s match against Team Dignitas. The two teams postured in bot lane river as C9 attempted to take Infernal Drake for the all important Infernal Soul. With a 4k gold deficit and a composition still needing time to scale, Team Dignitas was in a desperate situation.

Froggen saw his opportunity to make the difference. With the blue buff wall knocked down on the Infernal map, he was able to flank C9’s Zven. With a flash and a well-placed Orianna Shockwave, Froggen caught out and instantly deleted the flashless Aphelios. He did it. He killed the unkillable Zven, knocking his KDA from undefined to a measly 72.

Unfortunately for Froggen and Dignitas, the rest of C9 is pretty good too. C9 routed the rest of the fight, picking up four kills, Infernal Soul, and a 32 minute win over Dig. Zven’s first death was about the only thing that went wrong for C9 in the win, and it’s hard to think of a weakness for the only 6-0 team in the LCS.

Then there’s the bot lane. Zven and Philippe “Vulcan” Laflamme have been nothing short of phenomenal, and with TL struggling, C9 lay claim to the best bot lane in the LCS. That Zven has died only once in six games while playing only Aphelios and Senna, two champions with very limited mobility, is a testament to the positioning of Zven but also the dominant position C9 has been in every game.

Cloud9 will have a tough test against the resurgent TSM to open week four. They will then face Evil Geniuses in the final game of the week on Monday Night League.

Cloud9 is the undisputed best team in the LCS so far, but TSM looks like the top challenger. There are star matchups across the board. Licorice and Broken Blade are two of the most mechanically gifted top laners in the league, Bjergsen and Nisqy are fixtures as elite mid laners, and TSM’s revamped bot lane can challenge the skills of C9’s machine. The matchup could hinge on which of the historically volatile junglers Dardoch and Blaber gets the early advantage on the map.

These were both teams that were supposed to be playoff locks and challengers for the title. Instead, Counter Logic Gaming sits alone in last place at 1-5 while Team Liquid are tied for seventh at 2-4. Both teams desperately need this win, not only to get a bump in the standings, but to boost team morale. The struggling solo laners of CLG could be just what TL need to build some confidence. Team Liquid should be favored, but nothing can be taken for granted after their loss to GGS.