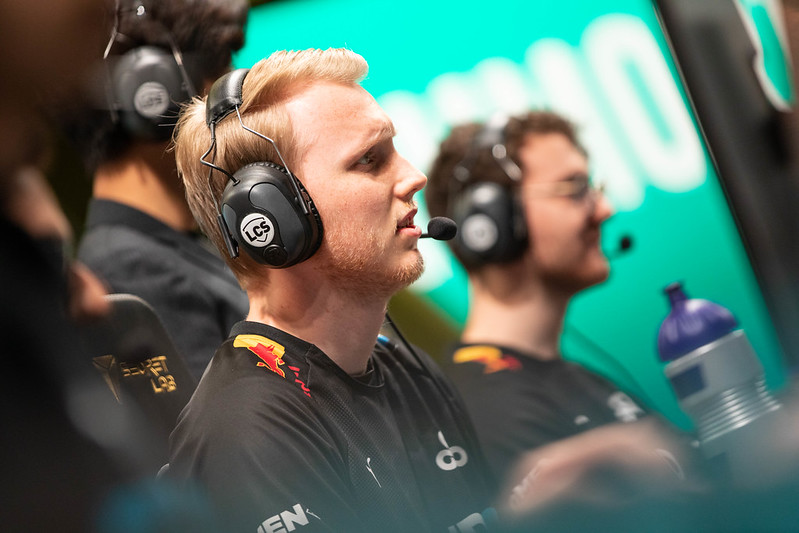 Zven has as many deaths as C9 has losses to begin the season: zero. (Photo courtesy Tina Jo - Riot Games)

The second week of the League of Legends Championship (LCS) 2020 Spring Split has concluded. Cloud 9 picked up another 2-0 week to become the last remaining undefeated team in the league. Conversely, Counter Logic Gaming dropped two more games and are the only team left searching for their first win. We take a look at where things stand in the LCS by looking at the top story lines so far in North America.

Cloud 9 received a lot of flak for their off-season moves. They brought in Jesper “Zven” Svenningsen for their most popular and long-standing player Zachary “Sneaky” Scuderi. C9 also let reigning LCS MVP Dennis “Svenskeren” Johnsen leave for Evil Geniuses. Philippe “Vulcan” Laflamme was brought in to give bot lane a boost, but the consensus seemed to be that C9 took a step back.

That hasn’t been the case through the last two weeks, though. C9 look like the best team in the LCS and have the record to match. They may not have played the most difficult schedule so far, but they did beat Team Liquid and their wins have been total blowouts.

Yasin “Nisqy” Dinçer opened the weekend match against Immortals with a solo kill on Jérémy “Eika” Valdenaire to get the ball rolling. C9 then used their winning lanes to start stacking up drakes, picking up the Mountain Soul in under 23 minutes. Zven picked up a triple kill on Senna, leading to a Baron and a relatively easy closeout. C9 conceded only one turret and three kills in their 29 minute win.

The 2-1 100 Thieves seemed poised to present a better challenge, but C9 had little trouble dispatching them as well. Eric “Licorice” Ritchie got the best of Kim “Ssumday” Chan-ho in the matchup of superstar top laners, going 3/1/10 on Camille to Ssumday’s 0/5/0 Aatrox. Nisqy and Zven both finished deathless to cap off a second perfect week for C9. That makes Zven deathless for his first four games, running his season-long K/D/A to an incredible 18/0/33.

Congratulations to @Zven of @Cloud9 on winning the @MastercardNexus Player of the Week for week two of the 2020 #LCS Spring Split! pic.twitter.com/5a6zBFU64S

Licorice, in particular, is enjoying playing with his new teammates. When asked post-game about his team’s great macro play, he responded: “I think our macro is really good, but you can’t macro if you don’t win lane. Because we win lane so often we’re able to practice the proper macro for closing out games all the time.”

Some may take that as a slight aimed at Sneaky and Tristan “Zeyzal” Stidam, even if their laning was never as poor as suggested by fans. The fact remains that the revamped C9 is focused on win lane equals win game, and they have the results to back it up two weeks into the season.

With another two losses in week two, Counter Logic Gaming are in sole possession of last place as the only winless team in the LCS. This comes after the they finished third in 2019 Summer and added Lee “Crown” Min-ho to upgrade their mid lane. Sure, they may have lost Andy “Smoothie” Ta for Vincent “Biofrost” Wang swap, but it was hard to predict just how lost CLG have looked to open the season.

In their game against 100 Thieves, CLG looked like a team lost in the mid-game. CLG drafted a 1-3-1 composition centered around Kim “Ruin” Hyeong-min’s Kayle countering Ssumday’s Sett. It worked to perfection in lane, as Ruin got to free farm and rendered Sett useless as Kayle continued to scale.

The problem was that after the laning phase, Ruin and CLG never got the timing right on the split push. 100T would collapse on Ruin for free kills while the rest of CLG were never in a position to trade an objective on the map. Ruin eventually picked up a triple kill while defending his Nexus, but the easier to execute 100T team fight composition carried them through the game.

.@100Thieves look for the decisive team fight, but @ruin_lol saves the game for @clgaming with a triple kill! #LCS pic.twitter.com/Sqw75XIjd8

CLG similarly drafted a 1-3-1 composition against TSM’s team fight composition, but this time they didn’t even have the advantage of a better laning phase. Sergen “Broken Blade” Çelik’s Ornn bullied Ruin’s Sylas in lane, taking a CS lead and turret plates. Once CLG fell behind, they had no way to engage fights and no champion strong enough to win in a side lane. Their only hope was for TSM to dive into them too aggressively.

But they didn’t and CLG lost their fourth game in four tries. It’s still too early to consider this a lost season, though. Remember that Crown didn’t make it back to the team until less than a week before the season started. That fits with CLG looking uncomfortable in the mid-game, especially when Crown is expected to be one of the players in the side lane. It may also help CLG in the short-term to draft easier to execute compositions with more front-line and engage until they are more confident in their team’s execution.

Poe Mows Down Dignitas with Rumble

Rumble and Akali are the only two champions to have a 100% pick/ban rate so far in the LCS. While Akali has been banned in every game, Rumble made his third appearance in FlyQuest’s match against Dignitas. Dignitas may have been riding high with a 3-0 record heading into the game, but that momentum wasn’t enough to stop Tristan “PowerOfEvil” Schrage’s Rumble from mowing them down.

Dignitas had the numbers advantage at a Rift Herald fight nine minutes into the game, but PoE’s Rumble didn’t mind. He laid down an Equalizer across three of Dig’s members, forcing them to retreat after sustaining massive damage. FlyQuest picked up three kills and took an early 2K gold lead they would use to snowball their dragon count.

By the time FlyQuest picked up their Infernal Soul at 28 minutes, PoE was already on a rampage at 6/0/2. Dignitas tried a desperation engage minutes later, but PoE showed why it’s impossible to engage into a fed Rumble. He laid down another perfect Equalizer, but this time he had the items to one-shot Zaqueri “aphromoo” Black’s Thresh and Heo “Huni” Seung-hoon’s Sett. With that fight win, FlyQuest were able to finish the game down bot lane to hand Dignitas their first loss of the season.

PoE finished 9/0/5 and dealt 27.3k damage to champions, most in the game by 12K. The ability for Rumble to spam push waves, have a game-changing team fight ultimate, and be flexed between mid and top makes him a must-pick or ban. Even with last pick available to Henrik “Froggen” Hansen, his Ekko counter pick did not make an impact.

FlyQuest now stand at 3-1, with their only loss to Team Liquid. That already puts them more than halfway to their 2019 Summer win total of five. Their ability to play through every lane and mix split pushing with team fighting makes them a dangerous matchup in the LCS.

Two of the hottest teams to open the season face off for the first time. Licorice and Omran “V1per” Shoura are two of the best NA talents in top lane and have the ability to pop-off on carry champions. Jason “WildTurtle” Tran and Lee “IgNar” Dong-geun will try to be the first ones to hand Zven a death this season. If FlyQuest have an advantage, it should be the veteran Lucas “Santorin” Tao Kilmer Larsen’s smart jungle pathing against the less experienced Robert “Blaber” Huang.

Dignitas passed their test against Team Liquid but subsequently fell to FlyQuest after a questionable draft. Both teams are built around their solo lanes, so there should be a number of skirmishes on the top half of the map. Aphromoo and superstar rookie Johnson “Johnsun” Nguyen will look to continue their run of lane dominance against the most dominant bot lane of them all in Zven and Vulcan.