LCS Week One: Johnsun and Dignitas Earn a 2-0 Start 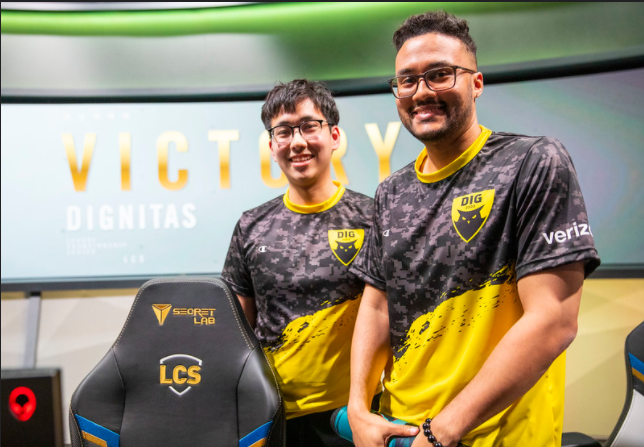 The first week of the League of Legends Championship (LCS) 2020 Spring Split has concluded. TSM’s new roster got off to a rough start, losing both games to begin the season. On the other end of the spectrum, Cloud 9, Dignitas, and FlyQuest opened the year with a weekend sweep. We take a look at where things stand in the LCS by looking at the top story lines so far in North America.

Dignitas’ offseason seemed uninspiring coming off of a World Championship appearance, especially considering the lack of experience from their new bot laner. Johnson “Johnsun” Nguyen not only had never played in the LCS before week one, he only has four Academy games played in his career. He spent 2019 as essentially third on TSM’s bot lane depth chart behind Edward “Tactical” Ra and LCS starter Jesper “Zven” Svenningsen.

Johnsun didn’t look like a rookie in his debut. He finished his opening weekend a combined 10/1/10, especially impressive considering he twice played dashless carries in Ashe and Senna. The wins also came over some of the better ADCs in the region in World Champion Bae “Bang” Jun-sik and MSI finalist Trevor “Stixxay” Hayes.

What stood out about Johnsun’s play was his willingness to put himself in range to deal damage despite his lack of built-in escapes. Inexperienced ADCs are often too afraid of getting caught and sacrifice damage in the name of safety. It surely helps Johnsun that he lanes alongside Zaqueri “aphromoo” Black, who is no stranger to guiding ADCs through their rookie year. Stixxay himself made his debut with aphromoo, as did 100T bot laner Cody “Cody Sun” Sun.

Johnsun and aphromoo weren’t the only ones playing well for Dignitas, either. Henrik “Froggen” Hansen obliterated Counter Logic Gaming on Viktor, making it look like they picked up the wrong import mid laner. Jonathan “Grig” Armao looked unburdened by finally getting out from the TSM cloud and jungling in a new environment.

Congratulations to @Froggen of @Dignitas on winning the @MastercardNexus Player of the Week for week one of the 2020 #LCS Spring Split! pic.twitter.com/IphXAa4TZU

Perhaps most importantly, Heo “Huni” Seung-hoon might be showing signs of accepting a more supportive role on the team. Huni took Renekton against Ornn versus CLG, and instead of building a tank shredding item like Blade of the Ruined King for split push potential, Huni built a second-item Gargoyle Stoneplate to be the damage soak Dignitas needed. For a player who is used to teams being built around him, the ability to set aside ego for the good of the team can never be taken for granted.

As is tradition, TSM entered the new year full of hope. They upgraded three roles in the offseason, made a head coaching change, and re-signed star Søren “Bjergsen” Bjerg to a multiyear contract. This would finally be the year that TSM would return to their domestic dominance.

Unfortunately, TSM looked nothing like a winner reborn. In fact, they looked a lot like the team who closed out 2019 unable to find an identity. Their inability to make anything happen after the first ten minutes of the game was on display once again, especially troubling considering TSM feature three new players.

In their season opener versus Evil Geniuses, TSM picked up First Blood with a nicely coordinated invade between Joshua “Dardoch” Hartnett and Søren “Bjergsen” Bjerg. TSM also picked up the first Rift Herald, parlaying it into the first turret take of the game and an early 2.5k gold lead. But with little engage, TSM were too timid in trying to force fights and let IMT scale. Eventually TSM had no way to stop IMT’s Zoe and Ezreal poke and were whittled down into a demoralizing hour-long defeat.

TSM then took on Team Liquid, who were down their new jungler Mads “Broxah” Brock-Pedersen due to visa issues. Dardoch put together two beautiful ganks to open the game on Peter “Doublelift” Peng, killing him both times. It did not matter. Doublelift still out-CS’d Kasper “Kobbe” Kobberup and finished his first full item while Kobbe was still sitting on three Doran’s Blades. Despite drafting a team composition that spikes early, TSM never built on their early advantage and succumbed to TL’s superior team fight composition.

Some of the mistakes for TSM can be forgiven. They have a new roster and it will take time to build synergy, especially when the original foundation didn’t already have it. Bjergsen also tweeted after the game that he was very sick this weekend.

I was really sick this weekend but my team almost managed to carried me. Next week will be better.

But if TSM want to return to elite status in North America, they have to fix their issues in the mid-game. Kobbe didn’t lose the CS battle to Doublelift because he is an inferior player. Rather, TL’s wave manipulation and TSM’s lack of response sent several minion waves crashing into TSM’s turret without response. Improving on the fundamentals of wave management and proper fight selection would go a long way to putting TSM back in the upper echelon of the league.

FlyQuest Back on Track

It hasn’t been too long since FlyQuest were a top-four team in the LCS. A disastrous 2019 Summer makes it easy to forget that they were a tier above the bottom six teams in the LCS last Spring. Now that they’ve made a couple of roster upgrades and had some time to regroup, it looks like they might be right back near the top of the LCS.

Immortals made a big mistake in their opening game of the season: they forgot to ban Riven against FlyQuest. Omran “V1per” Shoura made them pay, putting forward the most dominant individual effort of the week in an 8/0/5 effort. At one point in the game, V1per engaged 1v5, killing a player and buying enough time for his team to follow up and pick up three more kills and Baron.

Add in a 3/0/3 Aatrox game against CLG, and V1per opens the season deathless. He’s not the only one, though, as new addition Lee “IgNar” Dong-geun finished the weekend a combined 2/0/23. IgNar’s nice KDA isn’t a product of passive play, either. Leona and Blitzcrank are two of the most aggressive and vulnerable supports available. IgNar just played them to perfection, especially his signature Leona. If teams need to start banning both Riven and Leona, FlyQuest are opening up a world of draft possibilities.

Speaking of draft possibilities, the main criticism of Tristan “PowerOfEvil” Schrage throughout his career has been his limited champion pool. There is no hiding that PoE prefers ranged mages, but his inability or unwillingness to play melee champions has hamstrung teams in the past. So it is very promising that he played Rumble in week one and performed well on him. That should build both PoE’s and FLY’s confidence in picking him more melee champions.

With the perennially good Lucas “Santorin” Tao Kilmer Larsen and Jason “WildTurtle” Tran continuing to look good, FlyQuest look a lot more like the team that finished fourth-place in 2019 Spring than the ninth-place disaster in Summer.

Dignitas may have looked great in the opening week, but facing Team Liquid is a different task, especially if they get Broxah back. There are juicy matchups all over the map in this game: legendary Danish mids, Froggen and Nicolaj “Jensen” Jensen, former Rush Hour partners aphromoo and Doublelift, and former SKT top laners Huni and Jung “Impact” Eon-yeong. Look for TL to save the mid counter pick on red side to try to limit Froggen’s impact on the game.

The classic North American rivalry renewed, though neither team has been claiming any titles recently. Both teams started week one 0-2 and will be desperate to avoid another early season loss. It will be interesting to watch the bot lane matchup, as the teams essentially swapped Vincent “Biofrost” Wang and Andy “Smoothie” Ta this offseason. Both top laners have had high variance performances, so the winner of that matchup could determine the game.