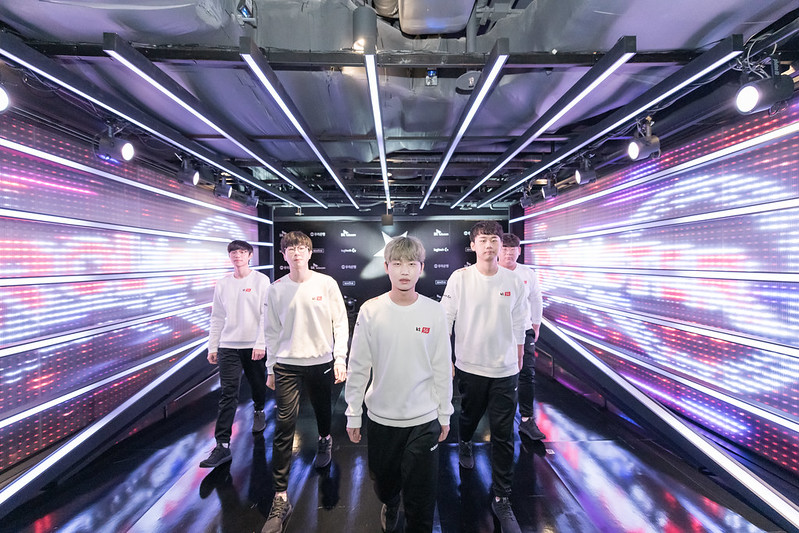 KT Rolster have made the playoffs after an impressive second half. (Photo courtesy Riot Games - LCK)

The League of Legends Champions Korea (LCK) completed their seventh week of the 2020 Spring Split. KT Rolster and DAMWON Gaming clinched the final two playoff spots, while Griffin are one of the two teams that will have to fight in the Promotion Tournament. We take a look at where things stand in the LCK by looking at the top story lines so far in Korea.

Gen.G, DragonX, and T1 all locked up their playoff spots in week seven. There will be no drama on the final two spots as KT Rolster and DAMWON Gaming have both guaranteed their spots heading into week nine.

KT Rolster saw their eight game win streak snapped in week seven to DragonX, but they bounced back in week eight with a pair of 2-0 wins. The second of those was a no-doubter against SANDBOX Gaming. KT Rolster won the games with kill counts of 14-4 and 14-1 in 31 and 24 minutes. Both Lee “Kuro” Seo-haeng (5/0/16) and Kim “bonO” Gi-beom (3/0/14) went deathless in both games of the series.

Their bigger win happened the day before against T1. KT Rolster controlled the opener by stacking dragons. Though bonO was on the scaling Sejuani, he secured Cloud Soul by 25 minutes to help KT match the scaling of Ornn and Taric. Kuro’s Azir took care of team fights, dealing a game-high 21.4k damage to champs and finishing 6/0/2.

KT controlled game two as well, building a 7.2k gold lead by 26 minutes. T1 got a large chunk of gold back when they took Baron after KT died to kill inhibitors, but the 5v5 team fight still won it for KT in the end. Kuro’s Azir picked up a double kill and Kim “Aiming” Ha-ram’s Miss Fortune a triple kill to close it out.

Despite clinching their playoff spot, DAMWON Gaming did not have a good week eight. They lost both of their matches, including a shocking 0-2 to relegation candidate Griffin.

As our players recovered their confidence, we prepared a more exciting and enjoyable match. Please watch and support us so that we can get a step further to the Post Season.

Neither of the games was particularly close. DWG lost 2 kills to 12 in game one before falling 1 kill to 13 in game two. They took only four turrets in the series and, despite drafting for lane, never held the early advantage in either one. The 1-2 loss to DragonX was more competitive, but there’s no doubt that DWG backed into the playoffs.

That being said, both of these teams could present a challenge for one of the top three. KT Rolster have proven that beyond a doubt in the second half of the season. DWG have been up and down, but that’s really been the case for them throughout their time in the LCK. Their floor is low, but their ceiling is as good as any team. That’s a scary thought for an opponent in a best-of series.

While Gen.G have the game lead, they also have the hardest matchup of the top three teams in KT Rolster. T1 (Afreeca Freecs) and DragonX (APK Prince) both face sub-.500 non-playoff teams.

In terms of current form, DragonX have been playing the best of late. They are now winners of six series in a row, including 2-0 wins over KT Rolster and Gen.G. In week eight DRX continued their momentum with 2-1 wins over DAMWON Gaming and Afreeca Freecs.

T1 opened with five consecutive series wins to begin Round 2, including a 2-0 win over DRX and a 2-1 win over Gen.G. However, they have now lost two of their last three matches. The fourth and fifth seeded KT and DWG both upset T1 2-0. T1 may be more at risk of an early round upset than the other two top teams, underscoring their desperation to improve their seeding.

Gen.G have struggled the most coming back in Round 2, losing three of their last five series. That includes an ugly 2-1 loss to Hanwha Life Esports to close week eight, as well as losses to both DRX and T1. You would hope a team rebuilt from scratch would get better as the season goes along, but Gen.G haven’t been able to maintain their torrid pace to start the season.

Seeding is so important in the LCK because of their gauntlet format. While there was no difference between seeds one through four in LCS or LEC besides opponent strength, each seed from three to one basically grants a series win in the LCK. The third seed automatically begins in round 2, the second seed’s first match is the semifinals, and the first seed clinches a spot in the finals.

Griffin kept their hopes of avoiding the tournament alive via a 2-0 upset of DAMWON Gaming to open week eight, but a subsequent 2-0 loss to Afreeca Freecs sealed their fate. Griffin were even ahead in game two against AF, but a botched fight around Ocean drake allowed AF to get Ocean Soul and stabilize with Ornn.

Griffin did not win in today's game.
Thank you everyone for supporting us. pic.twitter.com/fYdtmExRUk

It’s been a shocking fall from grace for Griffin. They were winners of both the 2019 Spring and Summer regular seasons, and despite never quite sealing the deal in tournaments, were still one of the best teams in Korea. The off-season drama that led to roster changes totally changed the team dynamic, as has a sharp decline in performance from Lee “Tarzan” Seung-yong.

That said, it’s still difficult to imagine a team with Tarzan, Son “Ucal” Woo-hyeon, and Park “Viper” D0-hyeon losing to a CK team. Even though they’ve had a terrible year, they are nowhere near as bad as the Jin Air Green Wings team that was recently relegated for APK Prince. There is also the chance that Griffin could re-enter the league as a franchised partner, but the off-season debacle certainly won’t help their cause.

The other LCK team forced to participate in the Promotion Tournament has not yet been determined. Afreeca Freecs have guaranteed themselves safe, leaving SANDBOX Gaming (5-12), Hanwha Life Esports (6-11), and APK Prince (6-11) fighting to stay in the LCK. SBX must win against DWG to avoid the tournament. HLE gets a great matchup against Griffin, while APK must play against a DRX team that is trying to improve their seeding.

This is an interesting match in which KT Rolster have nothing to play for seeding wise, while Gen.G will desperately want to win to clinch the first seed. Where KT may decide to save some comps and counter picks, it wouldn’t be surprising to see Gen.G go all out and potentially use something they would otherwise want to save for later. Kim “Clid” Tae-min versus bonO is a superstar jungle matchup to follow.

This is another matchup featuring one team with nothing to play for, DAMWON Gaming, and one desperately trying to move up in the standings, SANDBOX Gaming. SBX have finally moved Park “Summit” Woo-tae back into the starting lineup, giving us a great matchup between him and Jang “Nuguri” Ha-gwon. Kim “OnFleek” Jang-gyeom also made a return to the starting lineup over Son “Punch” Min-hyuk in SBX’s loss to KT Rolster.