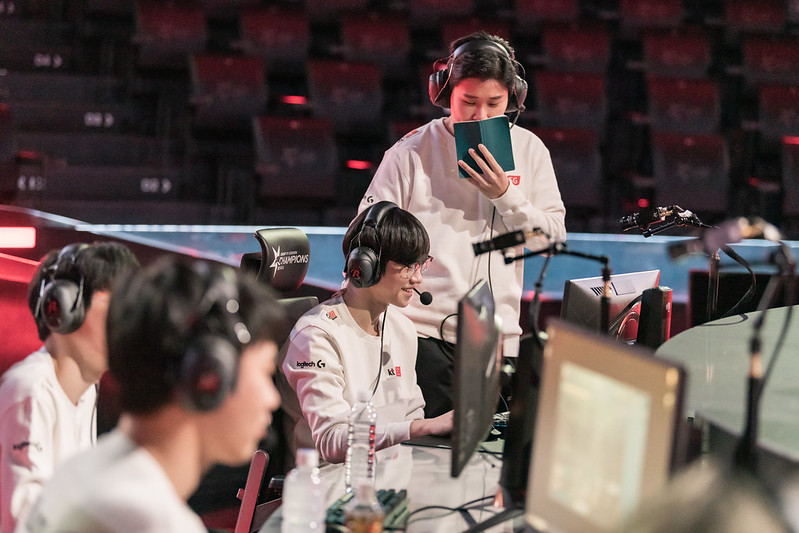 KT Rolster are one of the hottest teams in the LCK. (Photo courtesy LCK - Riot)

The League of Legends Champions Korea (LCK) completed their sixth week of the 2020 Spring Split. Coming off a hiatus due to the coronavirus, the LCK moved to an online format for the first time. KT Rolster have surged to fourth place after their seventh straight win, while Griffin have fallen all the way into last place. We take a look at where things stand in the LCK by looking at the top story lines so far in Korea.

KT Rolster had a massively disappointing 2019 season. Despite investing in what they thought would be a world-class top half of the map in Song “Smeb” Kyung-ho, Go “Score” Dong-bin, and Gwak “Bdd” Bo-seong, they were one of the worst teams in the LCK. KT went 4-14 in Spring and 6-12 in Summer before rebuilding their roster again this off-season.

Lee “Kuro” Seo-haeng was coming off another great season with Bilibili Gaming when he joined, but the other KT moves seemed lackluster. Gone were their days of trying to build through superteams full of starpower. This team would be a different kind of team, reliant less on mechanical outplays and more on map play.

The early results were not promising. KT lost their first five matches of the season, highlighted by a stunning 2-0 defeat to APK Prince. Considering APK were coming off a KeSPA Cup in which they lost to a CK team, it was about as bad as it could get for KT.

However, that APK Prince game seems to have served as a wake-up call. Since that loss, KT has ripped off seven consecutive match wins to vault all the way from tenth to fourth in the standings. That run included wins over DAMWON Gaming, Hanwha Life Esports, and Afreeca Freecs in week six.

KT began the week with their win over DWG. Kim “Aiming” Ha-ram carried game one, going 10/0/2 on Kalista while more than doubling the next highest damage output in the game (24.8k). DWG bounced back to win game two with a strong Ornn performance from Heo “ShowMaker” Su, but game three was another stomp for KT. Kuro’s Rumble burned up DWG’s heavy melee composition to the tune of a 4/0/5 score. KT needed only 27 minutes to earn the win.

Their match against Hanwha Esports was even more straightforward. KT Rolster combined to out-kill HLE 33 to five across the two games, winning in 29 and 24 minutes. Aiming kicked the game off with another 10 kills, deathless performance (10/0/5), this time on Ezreal. Kim “bonO” Gi-beom had a perfect jungle performance, finishing a combined 3/0/29 against Kang “Haru” Min-seung.

Afreeca Freecs put up the biggest fight of the three KT victims, but only after another KT stomp in game one. Stop me if you’ve heard this before, but Aiming went deathless and picked up 10 kills again in a game one (10/0/5). However, KT’s Vayne composition in game two did not pan out, and AF took advantage for a 35 minute win. KT then needed 40 minutes in a back-and-forth game to pull out the series in game three. Aiming’s Miss Fortune had the strong KDA (8/1/4), but it was Kuro’s Rumble that really gave AF fits. His team fight Equalizers landed the damage that allowed Aiming to clean up the fights.

Now at 7-5, KT Rolster look like one of the best teams in Korea. They have matches against two of the worst teams of the league in Griffin and APK Prince to keep their momentum going.

It was a tumultuous off-season for Griffin, to say the least. They lost great players in Son “Lehends” Si-woo, Jeong “Chovy” Ji-hoon, and Choi “Doran” Hyeon-joon, as well as a great coach in Kim “cvMax” Dae-ho. But more than that, they lost years of synergy from the team that took the LCK by storm in their 2018 Summer LCK debut.

Still, the cupboard wasn’t left bare. Lee “Tarzan” Seung-yong and Park “Viper” Do-hyeon have long been considered some of the best in their role in the LCK, while late addition Son “Ucal” Woo-hyeon gave Griffin the best possible mid lane replacement they could have hoped to get. Nobody would argue that Griffin didn’t get worse in the off-season, but there is getting worse, and there is falling from perennial contender to last place.

Last place is where Griffin find themselves now after they extended their losing streak to eight consecutive matches. Griffin have not recorded a win since week two, when they barely held on to beat APK Prince 2-1.

Griffin opened week six against the first place Gen.G. Griffin tried their first real roster change of the season, subbing in Yoon “Hoya” Yong-ho. Anyone who watched Choi “Sword” Sung-won play in the 2019 World Championship knew his time remaining as a starter was limited, but Doran’s departure meant nobody was prepared to step into the starting lineup yet. Griffin decided now was the time to give Hoya his chance.

Hoya had a fine debut against Kim “Rascal” Kwang-hee, but it didn’t make much difference in the series. Gen.G won game one 13 kills to five in 25 minutes, followed by an 11 kills to six win in 26 minutes in game two. Kim “Clid” Tae-min jungled circles around Tarzan, though he admittedly has better players in every single lane.

It was much more troubling to see Griffin lose to SANDBOX Gaming in their second match of the week. Tarzan had a vintage performance to carry Griffin in game one, going 2/2/17 on Jarvan IV to participate in 19 of Griffin’s 23 kills. But the excitement was short-lived. SANDBOX bounced back to win game two with a nice Vayne carry from Moon “Route” Geom-su, setting up a game three. SANDBOX left no doubt who the better, or worse, team was in winning in an 11 kill to one stomp. Ucal was the only member of Griffin to manage a kill.

Griffin did not win in today's game.
We will prepare harder and show better results next game.

Thank you everyone for supporting us. pic.twitter.com/Jwj8z8L2FU

Griffin’s match against DragonX to close the week was just as non-competitive as the one against Gen.G, resulting in another quick 2-0. Griffin find themselves tasked with games against playoff caliber teams KT Rolster and T1 to begin week seven. They get APK Prince to close the week in a chance to climb out from last place.

In their last match of Round One, the struggling SANDBOX GAMING started Han “Lonely” Gyu-joon in place of Park “Summit” Woo-tae. Summit had been SBX’s only starting top laner since their debut in 2019 Spring. It was possible that SBX wanted Summit to watch a game from the sidelines as a hiatus loomed, but their continued use of Lonely after the break means that Summit has officially been benched.

He’s not the only one to have his spot taken. Former DAMWON Gaming jungler Son “Punch” Min-hyuk has taken most of the starts from Kim “OnFleek” Jang-gyeom since the break, while Moon “Route” Geom-su has retaken the starting ADC role from Han “Leo” Gyeo-re.

It’s not a surprise to see SANDBOX shaking up their roster. This is a team that went 13-5 and 12-6 in their first two seasons in the LCK last year, lost no significant starters, and only upgraded the talent on their roster in the off-season. Yet, SBX somehow started Round 1 an abysmal 1-7.

It is a surprise, though, to see SANDBOX bench Summit. For a team that has lacked in starpower in their brief time in the LCK, Summit was their best player. He’s the definition of a carry top laner, and while he has had his share of head-scratching games, it’s hard to imagine he won’t eventually find his way back into the starting lineup.

We won the game against Afreeca Freecs. Thank you for your support.#SBWIN #LOL #LCK pic.twitter.com/XPUCVZvzTb

That said, SANDBOX did pick up a pair of match wins in week six over Afreeca Freecs and Griffin. The lost to APK Prince to close the week will sting, but SBX will be happy to have doubled their season win total. With Route having several good games in a row and Summit sitting on the bench, the former Jin Air Green Wings star may be the new face of the franchise.

Yes, these teams are polar opposite in the standings. T1 are one of the best teams in the league, while Griffin are one of the worst. But if Griffin were going to break out a vintage performance this season, don’t you think they would want to do it against the team that thwarted their championship aspirations time and time again? When Tarzan is on his game, he can put any team in a position to steal a game.

Two of the top contenders in the LCK face off for the second time. Gen.G won a closely contested 2-1 series in week three. Both teams like to be bot lane focused, particularly DragonX, but Gen.G has a definite advantage with Rascal in top lane. Both Chovy and Bdd have played at an MVP level so far, so their mid lane matchup will be the one to watch. With Gen.G on red side, expect them to leave their counter pick for Bdd, unless DRX opt for a Chovy power pick early.