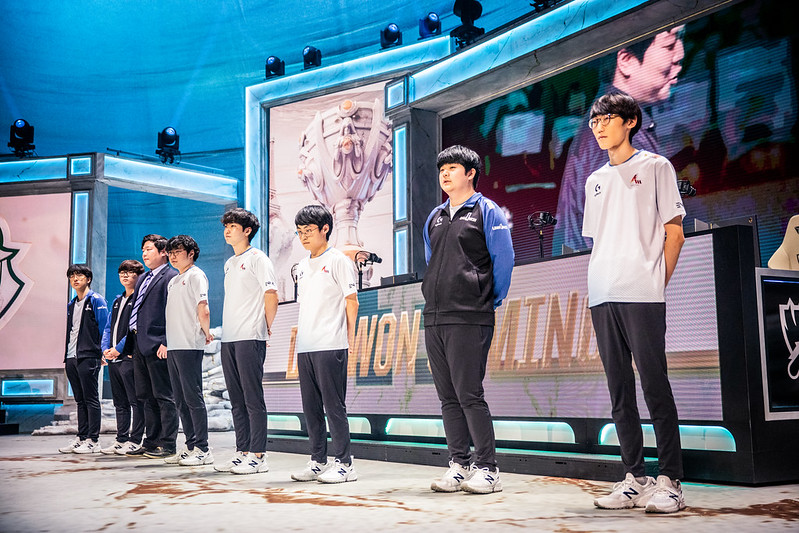 DAMWON Gaming have come back to life with four straight wins in the LCK. (Photo courtesy Colin Young-Wolff - Riot Games)

The League of Legends Champions Korea (LCK) completed their seventh week of the 2020 Spring Split. DAMWON Gaming have come back to life to win their fourth straight series after a disappointing start to the season. On the flip side, Gen.G had their first losing week of the season after dropping matches to T1 and DragonX. We take a look at where things stand in the LCK by looking at the top story lines so far in Korea.

DAMWON GAMING BACK TO LIFE

Heading into 2020, DAMWON Gaming looked like one of Korea’s best hopes of ending the LPL’s recent run of world champions. They were coming off a fantastic 2019 in which they became one of the top teams in the world. They did not win either LCK split and were knocked out of the World Championship in the quarterfinals, but they were young and possessed some of the highest highs of any team. Known for being scrim gods, the team just needed to work on their consistency to take the next step.

The off-season didn’t hurt them at all. Son “Punch” Min-hyuk moved on to SANDBOX Gaming, but Kim “Canyon” Geon-bu’s strong play to close the year meant there was no playing time left for Punch. Not only did DWG not lose any of their starters, they were able to retain sub Lee “Flame” Ho-jong and add ADC Jang “Ghost” Yong-jun. Sin “Nuclear” Jeong-hyeon still opened the season as the starter, but adding depth in a weaker position is never a bad thing.

The start to 2020 did not go as planned. DAMWON Gaming started the season 4-7, suddenly sitting in the standings next to the worst teams in the league. Obviously it’s been a very strange year among the coronavirus pandemic, but DWG were only 4-5 when play was halted for three weeks. That’s not where they expected to be.

However, things have changed for the better in week seven. Ghost has stepped in for Nuclear at ADC and DWG have now won four consecutive series in 2-0 sweeps. What started as an innocent win over APK Prince in week six turned into an emphatic 2-0 win over T1 to close week seven.

Hanwha Life Esports were DWG’s first victim in week seven. DWG first picked Sett for Jang “Nuguri” Ha-gwon and he responded with a 9/0/1 carry performance against Lee “CuVee” Seong-jin’s Ornn. After that 26 minute win, DWG needed only 25 minutes to close out HLE in game two. Heo “ShowMaker” Su (8/0/5), Ghost (6/0/5), and Cho “BeryL” Geon-hee all went deathless in the win.

Next up were Afreeca Freecs. They put up a pair of fights, but ultimately succumbed 2-0 as well. Ghost picked up his first two game MVPs of the split, first going 8/1/5 on Varus before a 12/3/2 Aphelios performance in game two. They even treated us to the rare Nuguri Ornn game in game one. When Nuguri is locking tanks, you know DWG are playing seriously.

The win to close the week against T1, though, was by far the most impressive for DWG. DWG’s bot lane looked fine against what is one of T1’s main strengths, though DWG played fasting Senna both times. Park “Teddy” Jin-seong and Lee “Effort” Sang-ho were held to a combined 4/12/13 score in the series. ShowMaker also showed up against Lee “Faker” Sang-hyeok, going a deathless 10/0/8 across the series. To underscore their dominance of T1, DWG did not yield a single turret to T1 across the entire series.

We’ve known this version of DAMWON Gaming is always lurking no matter their form, but it was good to see it consistently on display for the first time in 2020. They get matches against Griffin and DragonX in week eight.

Gen.G had sole possession of first place prior to their matchup with T1 to kick off week seven. After the two teams met, that was no longer the case. T1 took down Gen.G 2-1 for the second time this season to take the season series. Gen.G then lost to DragonX 2-0 to have their first losing week of the season.

Gen.G opened their rematch against T1 with a win in game one. Former T1 jungler Kim “Clid” Tae-min got the best of his replacement Moon “Cuzz” Woo-chan, allowing his carries to do what they do. Gwak “Bdd” Bo-seong’s Zilean (1/0/10) enabled Park “Ruler” Jae-hyuk’s Aphelios (7/1/2) to play aggressively, and Ruler responded by dealing a team-high 17.7k damage on the immobile carry.

We take a 0-2 defeat today. We didn’t end the week as planned but next week we bounce back!💪#GenG #WeAreGenG #TigerNation https://t.co/S2uC6lAosH

Though it was disappointing to lose 2-1 to T1, it wasn’t surprising. It was, however, surprising for Gen.G to lose 2-0 to DragonX to end the week. Bdd and Jeong “Chovy” Ji-hoon have been battling it out with Faker for best mid laner in the LCK this season, but Chovy got the best of this matchup. His Zoe almost single-handedly propelled DRX to a stomp in game one. Chovy had 13 (13/0/2) of DRX’s 18 kills in the game and easily topped the damage charts at 25.1k. He followed that up with a 4/0/6 Leblanc performance in game two to give Gen.G their third series loss of the season.

Sandwiched in between those losses was a 2-0 win over SANDBOX Gaming, but it was still a very disappointing week for Gen.G. They’ll look to bounce back against APK Prince and Hanwha Life Esports in week eight.

Afreeca Freecs were one of the teams to watch entering the Spring Split. They were coming off a dominant performance in the KeSPA Cup and upgraded their ADC position with Jin “Mystic” Seong-jun in the off-season. AF then had a very solid 6-3 first half of the split, closing with a win over T1 before the brief hiatus.

We lost today's match against HLE today. We'll prepare well for next week. Thank you all for your support. pic.twitter.com/K8BA2AdZNT

The wheels have fallen off as AF have returned from the break. With three more losses in week seven, Afreeca Freecs have now lost 6 consecutive series in a row. What may be even more troubling is that these aren’t close matches that don’t go their way in game three. Afreeca Freecs have won only one single game during that stretch, meaning their game record in those six matches is 1-12.

These matches haven’t been against the strongest schedule, either. Sure, matches against first place Gen.G and a resurgent DWG are in there, but SANDBOX Gaming, APK Prince, and Hanwha Life Esports are a combined 15-30 on the season. Afreeca Freecs lost 2-0 to all three of them.

AF has tried swapping between Lee “Spirit” Da-yoon and Lee “Dread” Jin-hyeok at jungle, but it’s made little difference. ADC Seo “SS” Jin-sol got his first start since week two, but DWG still beat them 2-0. Kim “ALL IN” Tae-yang got the start for Song “Fly” Yong-jun against HLE and played well, but AF again lost. Give AF credit for trying to shake up their lineup one player at a time, but nothing has been able to get them out of their funk.

They’ll get their best chance against the last place Griffin to open week eight. AF then face the third place DragonX to close out their week. At 6-9, Afreeca Freecs needs to be nearly perfect to have a chance at making the playoffs.

These are now two of the top teams in the league after DAMWON Gaming’s recent surge. Both Chovy and ShowMaker are dominant mid laners, but matchups in the other lanes are lopsided. Nuguri has a big advantage in a pure 1v1 against Choi “Doran” Hyeon-joon top lane, though he is susceptible to falling to ganks. Kim “Deft” Hyuk-kyu and Ryu “Keria” Min-seok are likewise favored in bot lane. DWG could be inclined to let Kalista through unbanned on red side to try to secure Senna for Ghost.

KT Rolster finally ended their long win streak with losses to DragonX and APK Prince to close week seven, but they are still on the right side of the playoff picture entering week eight. T1 are coming off an uncharacteristic 0-2 loss to DAMWON Gaming. KT will be looking for Kim “bonO” Gi-beom to play aggressively against whichever of Cuzz or Choi “Ellim” El-lim he’s playing against. T1’s bot lane needs to erase their poor showing against DWG’s bot to win this favored matchup. Faker doesn’t need last pick to counter Lee “Kuro” Seo-haeng in lane, so we could see more of T1 giving priority to Canna as he continues to blossom into a star.