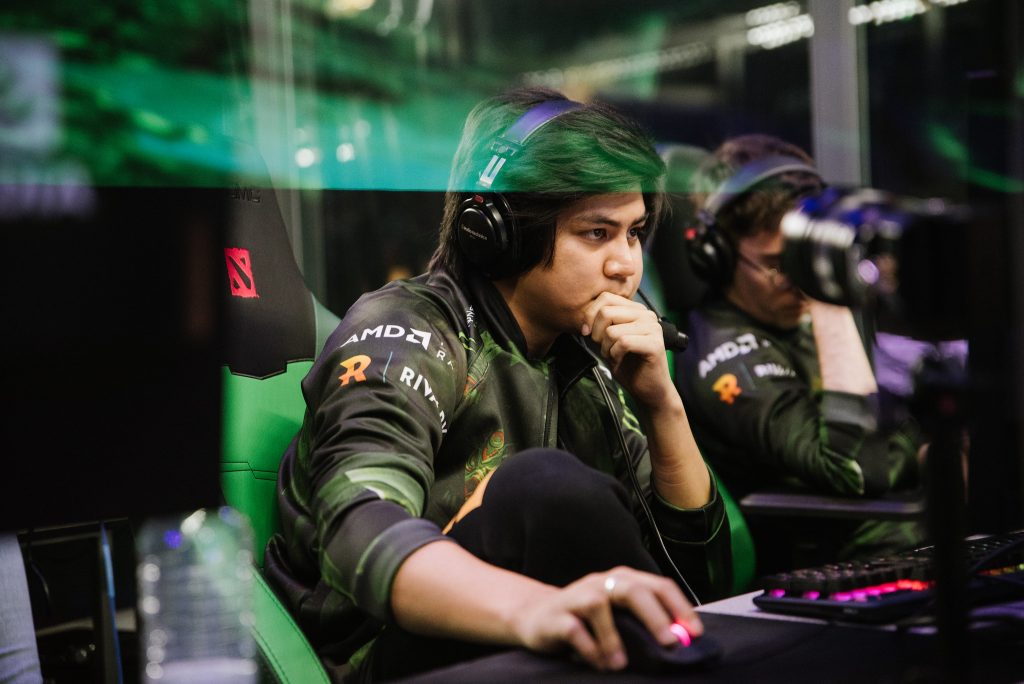 The true kings of Southeast Asian Dota are back. Fnatic defeated Team Adroit on Thursday, to claim the title of ESL One Los Angeles Southeast Asia champions—all without dropping a single game in the grand final match.

This was in stark contrast to how they performed in the group stage as a whole, having lost two separate three-game series in the preliminaries to teams that they should have been a lot better than on paper. It would seem that Fnatic had regained the discipline and focus that allowed them to win DOTA Summit 12 just three weeks ago—and just in time for the grand finals at ESL One.

Fnatic began their playoff run from the lower bracket, as a result of their third place finish in the group stage standings. There they faced off against BOOM Esports, the team that they lost to in three games last Monday. This time, the outcome was the exact opposite. It was Fnatic’s turn to put a stop to BOOM’s hopes and dreams, which they definitely did in style.

The first game was a pleasant one for them, as Adroit seemed to be okay with giving them their usual heroes. Both Anucha “Jabz” Jirawong and Nuengnara “23savage” Terramahanon were able to play as Grimstroke and Riki, which is a classic combo and a comfort duo for Fnatic. Their supreme synergy allowed them to win the safe lane matchup, which resulted in a blazing fast 13 minute Diffusal Blade for 23savage.

Consummate soft support player Djardel Jicko “Dj” Mampusti was also similarly on point as Rubick. His roaming helped Kam “Moon” Boon Seng’s Ember Spirit stay even with Rafli Fathur “Mikoto” Rahman’s Morphling in the middle lane, which Moon definitely appreciated as he was able to get his Maelstrom in a timely manner.

Later on in the game, he was able to steal Ice Blast from Alfi “Khezcute” Nelphyana, which led to a huge victory for them in a skirmish near the Roshan pit. Moon cleaned up the rest, slicing and dicing through BOOM’s lineup while they were weakened by the stolen ultimate.

From there, Fnatic leveraged their early advantage in order to take fights early and often. The strong power spikes of their draft helped them seize control of the game around the 20 minute mark. Though their lead nearly slipped away from them after a successful teamfight by BOOM shortly after, they kept their composure and closed the game out before things got out of hand.

BOOM then decided in the second game that they wouldn’t go down without a fight. Amazingly enough, they drafted Lifestealer for Randy “Dreamocel” Sapoetra, in spite of the huge nerfs to Maelstrom and Mjollnir that the hero suffered last month.

And it worked pretty well, all things considered. Though the lane wasn’t smooth sailing for Dreamocel, the farm acceleration provided by the Maelstrom allowed him to stay relevant at the very least. Meanwhile, Mikoto used his own Maelstrom on Ember Spirit to terrorize Fnatic, sniping them left and right with his Sleight of Fist.

IT'S A WIPE!@boomesportsid looking for vengeance in game 2 against @FNATIC showing that they're not to be underestimated!

An important teamwipe in the mid game then allowed BOOM to close the gap by punishing Dj’s Phoenix buyback and making sure that Fnatic could not escape with their lives. The advantage then went their way after another successful engagement, this time trading just a buyback for four lives on Fnatic’s side.

From there, it was all about BOOM Esports and their unstoppable march. Fnatic conceded the game just before 50 minutes had elapsed, as they had no answers to their rivals’ huge momentum in game 2.

But Fnatic made sure to let BOOM know exactly who they were: the perennial powerhouse squad in Southeast Asia. Once again picking 23savage’s Riki for themselves in the third game, they paired it this time around with Jabz’ Lich. Although not as potent as the combo with Grimstroke, the pair were able to trade evenly in the safe lane, which was important in a game where Moon’s Storm Spirit was up against Mikoto’s Kunkka in the middle lane.

Four heroes down on @FNATIC while @boomesportsid only trades two! Good deal!

BOOM held a small advantage going into the early game, due in no small part to some key pickoffs and a two for four trade going their way at the 15 minute mark. But some scrappy fights from Fnatic allowed them to claw their way back, spurred on by the fantastic job Moon did catching up after losing the lane and 23savage’s breakneck farming pace.

is this the end for @boomesportsid ?

With the advantage on their side, Fnatic pushed the tempo going into the late game, wiping the floor with BOOM’s heroes in a teamwipe at 38 minutes. Reeling and with no way of containing Moon, the Indonesian team gave up even more kills towards the end, and surrendered to bow out of the tournament shortly after.

And so there were two: Fnatic and Team Adroit. Fnatic had gone through the lower bracket to punch their ticket to the grand final match, where they were eager to exact their revenge on Adroit for beating them 2-1 last Tuesday.

Adroit went into the grand finals with a perfect score in terms of matches, having dropped only two maps the entire group stage. They had proven themselves to be worthy of the crown, but Fnatic had a few things to say about it. Three things, in fact—as the Malaysia-based squad swept their rivals in a 3-0 victory.

The first game was, yet again, the 23savage and Moon show. As Troll Warlord and Void Spirit respectively, the two primary Fnatic cores ran roughshod over Adroit’s draft in spite of John Anthony “Natsumi-” Vargas’ great performance as Phantom Lancer.

Team wiped!
5 of @AdroitDota goes down as @FNATIC picks them off one by one!

Some solid coordination and clutch decision making in the late game led to huge teamfight victories for Fnatic in the mid game and the late game. At one point, they were even able to trade two of their heroes’ lives in exchange for eight (including buybacks) on Adroit’s side.

.@FNATIC takes game 1 against @AdroitDota with a final team wipe!

Will Adroit be able to take the next game?

The game was completely out of their opponents’ reach even before that happened—and it only got worse when it did. Score one for Fnatic in the grand final match.

They carried their momentum well into the second game, though this time around it was the supports’ time to really shine. Both Dj and Jabz (playing Earthshaker and Elder Titan respectively) were the stars in Game 2, showcasing the sheer power of their ultimate abilities used in tandem.

THE BIG ECHO COMING FROM @DjardelJicko !

The wombo combo was absolutely massive. As Adroit pushed Fnatic’s tier 2 bottom tower while transitioning immediately into a teamfight initiation, Dj immediately slammed the door on them with a perfectly placed Echo Slam. Jabz followed it right up with his Earth Splitter, ensuring that all of Adroit sans Jun “Bok” Kanehara could escape.

With the advantage firmly in their hands, Fnatic did all that they needed to do to maintain it going into the mid game. A long, protracted engagement at the Roshan pit ensued at around the 26 minute mark, where Fnatic were able to draw the fight out long enough for Natsumi-’s Metamorphosis to wear off.

This fight lasted so long Bok got to use 2 Rolling Thunders! 😱😱

Recognizing the opportunity, Fnatic reset their positions and went on the offensive again. Though Adroit were able to pick them off one by one as they were split up, the timely buybacks from all of Fnatic allowed them to chase their opponents all the way back into their jungle. From there, the action simmered down a little, opening a window for Adroit to take Roshan for themselves.

In spite of them failing to get the Aegis of the Immortal, however, Fnatic kept their cool and held strong. They relied on 23savage’s Phantom Lancer and Dj’s Earthshaker to lead the charge, allowing them to seal away Game 2 in exactly 36 minutes.

Game 3 was the final show of force by Fnatic, both in terms of their drafting and in the execution of their game plan. The last pick Outworld Devourer was crucial to their strategy, as there were two strength heroes and one mana-hungry Ember Spirit in Adroit’s lineup. Piloted by Moon, Outworld Devourer’s Arcane Orb and Sanity’s Eclipse were able to cleave through Adroit’s large health pools and the protection from Ember Spirit’s Flame Guard with ease.

Things are looking more and more one sided in favor of @FNATIC right now as they take down @AdroitDota one by one! 😮

23savage’s Morphling was no slouch either this round. Kiting Adroit’s heroes for long periods of time and surviving by the skin of his teeth in spite of the Ice Blasts coming out from Bryle “cml” Alvizo’s Ancient Apparition, the 18 year old carry player kept up with Moon in terms of the damage output. His status resistance-focused item build also fared very well versus Adroit’s disable-heavy draft, and was proof of the young gun’s versatility and game sense.

Dont corner the blue shark or it'll bite ya!@AdroitDota is still in the game with a TEAM WIPE against @FNATIC

In true SEA fashion, though, Adroit did not give up despite the rough start. They were able to wipe Fnatic at no cost around the 20 minute mark, and were showing signs of life after the laning phase had come and gone. Alas, even that wasn’t enough to get the back in the swing of things, as Fnatic simply farmed faster than Adroit could by virtue of their heroes’ abilities.

Though they tried valiantly, Adroit could not stand up to the power of Fnatic’s cores. They called gg after 33 minutes of play, and handed the series and the championship to Fnatic.