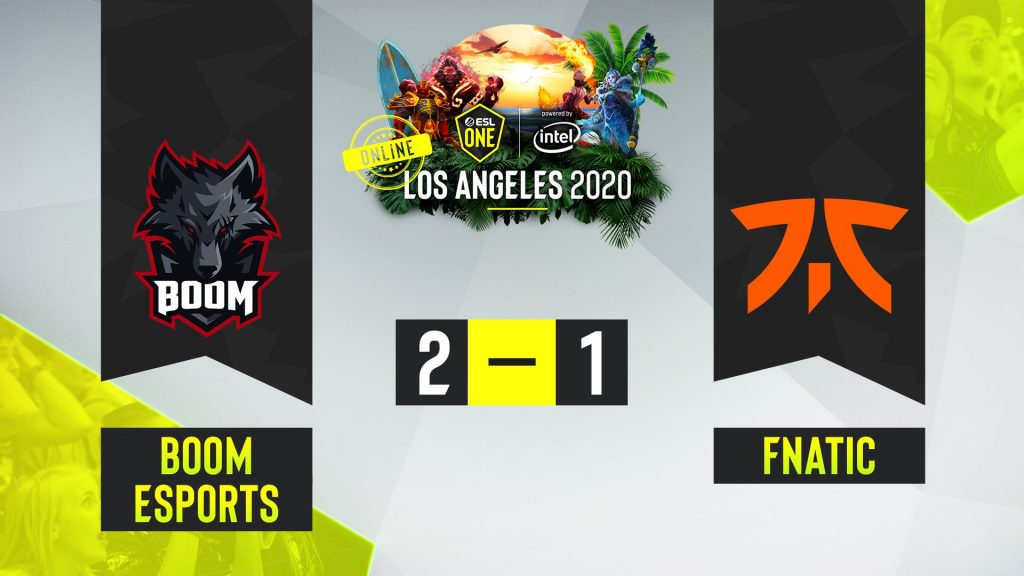 The Indonesian squad held off the Summit 11 champions to take second in the standings. (Photo courtesy ESL)

Adroit started the first day of the ESL One Los Angeles online tournament off with a bang, taking down Geek Fam two games to nothing—barely breaking a sweat throughout the series.

The all-Filipino team immediately turned up the heat in game one with a decisive last pick Meepo against Geek Fam’s draft, which was lacking somewhat in area of effect damage. They coupled this with a Chen pick in the first phase of the draft, ensuring that Meepo’s high armor and huge HP would stay topped up in teamfights.

Not even the combined strength of Karl “Karl” Jayme’s Shadow Fiend and Marc Polo Luis “Raven” Fausto’s Faceless Void could save them from the cheese pick. Adroit leveraged their strong teamfight and the ridiculous farming pace of John Anthony “Natsumi-” Vargas’ Meepo to coast to a net worth lead of 10,000 gold by the 24th minute.

What a beautiful fight from @AdroitDota , wiping the entire @TeamGeekFam players!

From there, the game was firmly in Adroit’s hands. With no damage to clean up after Chronosphere is laid down, Geek Fam could not stem the tide and had to surrender the first round to their opponents after just 30 and a half minutes.

Game two was a little bit more interesting—though only in the sense that it actually reached the late game instead of being a 30-minute thrashing. Adroit still busted out the unorthodox in the second round, putting Natsumi- on Lone Druid and Mc Nicholson “Mac” Villanueva on Alchemist.

A Chaotic brawl in the Rosh pit!

Natsumi-’s Lone Druid—or rather his Spirit Bear—served as a massive irritant in teamfights thanks to the power of Savage Roar. In one instance, the bear even helped decide a fight at the Roshan pit for them, allowing Mac to secure the Aegis of the Immortal and solidify their advantage on Geek Fam—as if the 12-minute Radiance and 15-minute Black King Bar on Alchemist wasn’t bad enough.

And although Geek Fam were able to trade a few kills here and there throughout the game, the 39,600 points of hero damage that Karl was able to dish out with Templar Assassin was not enough to save them from Adroit’s wrath. By the end of it all, Adroit held a staggering 54,600 gold lead. Definitely way more than their opponents could contend with.

This result puts Adroit firmly in the driver’s seat in the standings with a perfect record to start with. They await Fnatic in their next match Monday. Geek Fam, on the other hand, will have to regroup and reassess their strategies going forward if they want to make it to the playoff bracket.

On the second day, BOOM Esports stepped up big time against the most recent DOTA Summit champions Fnatic, holding them off two games to one in dazzling fashion.

Fnatic started out very strong in the first game, thanks to a brilliant draft that revolved around the supreme synergy between Nuengnara “23savage” Teeramahanon’s Riki and Anucha “Jabz” Jirawong’s Grimstroke. The fellow Thais leveraged their combo well, terrorizing the BOOM Esports lineup wherever they went.

Of course, the prowess of Daryl “iceiceice” Koh Pei Xiang in the offlane as Dazzle helped a ton as well, thanks to his fast Necronomicon timing paired with the sheer utility of Medallion of Courage and Guardian Greaves. The game was pretty much over by the 25 minute mark, during which Fnatic held a gold lead worth almost 20,000.

But then BOOM answered back with force in the second game, crushing Fnatic in the laning phase to secure map control early on. Rafli Fathur “Mikoto” Rahman absolutely popped off with his mid lane Monkey King, exerting his will and dealing significant damage to Fnatic throughout the game.

And though there were some touch and go moments for BOOM in the mid game, they held on to wipe Fnatic at the 29 minute mark to immediately retake the advantage. From there, marching into Fnatic’s base and taking down all their structures was a piece of cake for the Indonesian squad.

They then closed the coffin and nailed it shut in the third game, coasting to a large advantage from the get-go. The entire team was firing on all cylinders, managing to win nearly every lane matchup and holding Fnatic to just 13 kills total. Once again, Mikoto was the star of the show on his signature Ember Spirit, with Saieful “Fbz” Ilham supporting him as the 6-0 Mars.

The MADMAN is just playing around at this point!

Mikoto dodges not once, but TWICE in a row!

Combined with Brizio Adi “Hyde” Putra’s Phoenix, the three formed an unstoppable combination that Fnatic simply could not deal with. Surrendering after just 35 minutes of play, Fnatic handed the victory to BOOM, who now stand in second place in the tournament so far.

The action at ESL One Los Angeles SEA continues Monday, on the official ESL Dota 2 stream. As always, keep your eyes peeled here at Hotspawn for our coverage of the event!