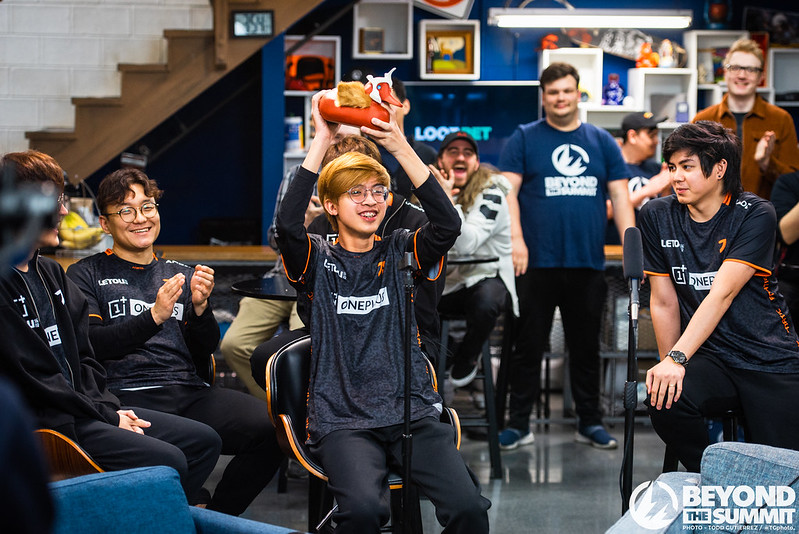 Fnatic won what could be last Dota LAN for quite some time. (Photo courtesy Beyond the Summit)

Amid the global chaos as countries tighten their borders and try to flatten the pandemic curve of the COVID-19 virus, two multinational teams faced off to win what could be the final Dota 2 LAN event for quite some time. For Fnatic, being in the Grand Finals was somewhat of a forgone conclusion entering the LOOT.BET Dota Summit 12 but their performance has still impressed. Perhaps more impressive has been the rise of OG.Seed to the ranks of true contender in just a few days of play.

In game one of the Grand Finals, Fnatic brought back a forgotten hero by picking up the Alchemist. Pairing the hard to kill hero with Io, Legion Commander and Death Prophet gave Fnatic an absurd amount of sustain in team fights. OG.Seed also decided to dust off a dead hero with a carry Ursa, pairing it with team favorites Chen, Void Spirit and Pangolier.

Within just a few minutes of the game starting, it became abundantly clear why Ursa is not being picked by anyone. Moon’s Death Prophet took over the game backed by all the strong save mechanics of his teammates and created more than enough space on the map for Alchemist to hit an early Radiance timing. With a Radiance, Aegis and Heaven’s Halberd at 14:53, 23savage had achieved true immortality and Fnatic easily closed out the game just a few minutes later.

Game two of the Grand Finals brought out some new wrinkles from Fnatic in the drafting phase. One of the only teams to run an Offlane Snapfire, the South East Asian powerhouse pieced together an aggressive early game with an Anti-Mage carry. Despite giving comfort heroes to OG.Seed, the pace was just too slow to make up for a disastrous laning stage. Despite killing the Anti-mage in the first minute of the game, OG.Seed wouldn’t register another until nearly the 10 minute mark. As one sided as game one was, game two might have been even more so and Fnatic slayed their way to within one win of being crowned champions of the LOOT.BET Dota Summit 12.

With their backs against the wall, OG.Seed reached for something new in game three, pulling out the Madara Morphling. The game began on much more even footing with both teams trading kills in the laning stage. Once the map opened up and the teams began to lose towers, 23savage’s Slark and Moon’s Void Spirit began to take over with several key pickoffs. After one such occasion, Fnatic made their first critical mistake, trying to take Roshan without the damage to close out the objective. A tense limbo ensued for several minutes until OG.Seed seized the initiative and the Aegis of the Immortal as well.

Fnatic weren’t going to let go so easily and big fight broke out during the rush for the Aegis with OG.Seed losing nearly everyone except for Madara who limped back to base, still holding onto his extra life. Even with that particular advantage, the rest of OG.Seed were feeling quite vulnerable and it became clear that Fnatic had the upper hand. Over the next 15 minutes, they systematically corralled OG.Seed back into their base. Demonstrating immaculate strategy and patience, Fnatic poked and prodded at the OG.Seed base, claiming tier three towers and barracks damage. Though OG.Seed demonstrated great discipline of their own in holding the high ground against incredible odds for several minutes, the critical mistakes were finally forced. Fnatic took the Summit series 3-0 and cemented themselves as one of the hottest teams in Dota right now.