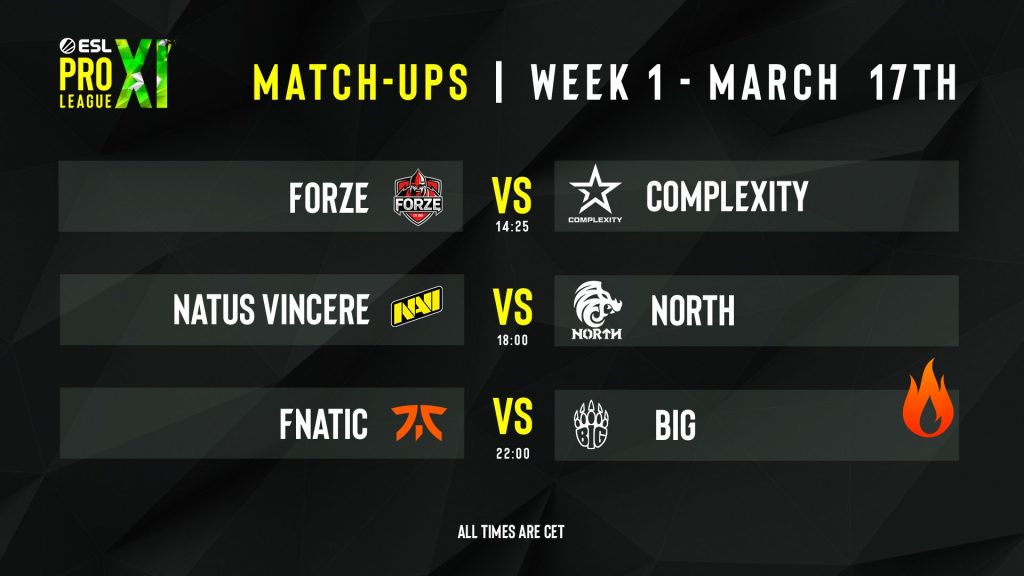 Group B features two of the best teams in the game, but the rest of the field won’t give in easily. (Photo courtesy ESL)

The second group at ESL Pro League Season 11 begins on Tuesday, now that the league is fully online. Pro League features six teams from around Europe, including a pair of of the heaviest hitters in the game. While the top two seeds are expected to be locked in, the bubble spot is up for grabs.

After their phenomenal performance at IEM Katowice, Na’Vi have usurped Astralis’s title of the number one CS:GO team in the world. With the entire team elevating each other to new heights, the CIS squad is now the strongest they’ve ever been. It will be a challenge for any team to take maps off them, let alone full matches. Na’Vi are the definite frontrunner in Group B.

The main competition for Na’Vi will be Fnatic. The Swedes have been back on their game for a while now and haven’t shown signs of slowing down. Fnatic haven’t placed below top four at a tournament ever since ESL One Cologne in July of last year. Although they barely fell short of finals at IEM Katowice, Fnatic has the potential to take the number one spot.

Complexity Gaming is the most likely candidate to earn the third seed in Group B. However, that assumption is based on them playing up to their ceiling. On a good day, Complexity has the skill and strategy to beat even Astralis. It’s just a matter of maintaining that level of play. This roster does have the potential to rise in the CS:GO scene as long as they take care of business.

BIG was recently added to ESL Pro League S11 after Heroic couldn’t field a roster. Despite being a replacement team, they could cause unexpected damage in this group. They are ranked 18th globally, only one spot below Complexity. BIG have been on the edge of being real tier one competition for a while now, and they have their work cut out for them.

Back to Basics for North

North recently re-acquired in game leader Mathias “MSL” Sommer Lauridsen. However, they haven’t been able to recreate the success they had with him before. North’s best finish this year was a top four at DreamHack Anaheim last month. It’s a good start, but North have to accomplish more if they want to regain the title of second-best Danish team.

ForZe not a Free Win

Despite being the lowest ranked team in Group B, forZe are still good enough to compete for the final advancement seed. The Russian squad is fairly inconsistent, but they have shown moments of brilliance before. 2020 hasn’t been kind to them, as forZe have only qualified for one real event in DH Anaheim and got last place. If forZe are to turn things around, it could start here.

What to Watch from Group B

As mentioned earlier, Fnatic and Na’Vi should be competing for the first seed and guaranteed Stage Two advancement. Having to play an extra match is on neither of their agendas. The other four teams would be happy to if it means getting top three in the group. Those bubble matchups will be incredibly important.

If there is one chance for a different team to nab a top two finish, it would be Complexity beating Fnatic in the head-to-head. These teams haven’t actually played each other yet, but Fnatic is definitely aware of the damage Complexity could cause to their campaign.

A match between two teams seeded next to each other, this will have big implications on who actually makes it into the last advancement spot. Their last meeting was not too long ago, BIG taking a 2-1 series win in the Europe Minor qualifiers. This is a must-win match for both teams.

North’s advancement at ESL Pro League depends on this day four match. They already play Na’Vi and Fnatic by this point, so winning against BIG is a requirement. North’s track record against BIG is very good at 8-3. BIG will also be wanting to reverse their fortunes in that regard.

The last day of the group plays host to the best match of them all. Na’Vi and Fnatic will be going head to head, likely for first seed privileges. True high level Counter-Strike will be displayed as this top five matchup heats up.