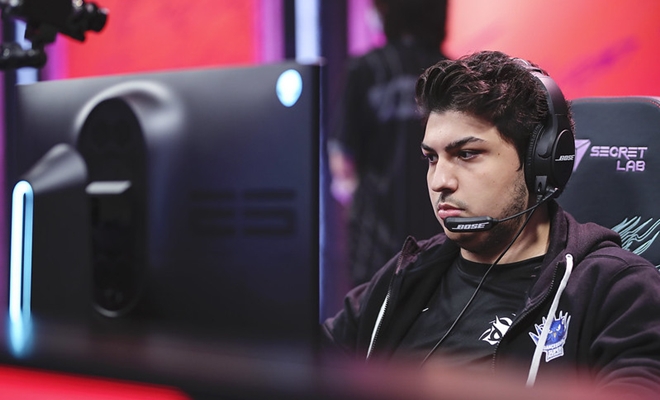 Armut has been one of the strongest top laners during Play-ins, and hopes to meet TSM Broken Blade in the Main Group Stage. (Photo courtesy Riot Games)

Papara SuperMassive took down the struggling MAD Lions 3-2 in their first best-of-five of the Play-in Knockout Stage. They’re now one match away from qualifying for the Main Group Stage. On September 30th, they’ll clash with Unicorns of Love for one of the four coveted Group Stage slots.

After taking MAD Lions out of the tournament, we spoke with SUP top laner İrfan “Armut” Tükek about his confident play style, his supportive family, and his thoughts on transferring to North America or Europe.

Hotspawn: Congrats on your victory, and you did it with Malphite no less! Why haven’t we seen more teams pick this champion?

Armut: [Laughs] Eh, you can’t blind pick the champion, I just saw the perfect opportunity so I said to my team “oh, this smells like Malphite,” you know? And we had zero scrims with Malphite, like zero practice, but they just believed in me so I’m happy.

Hotspawn: And it seemed like you were starting a lot of the plays on that pick. Do you feel like playing tanks allows you to join in on some of the team’s shotcalling a bit more?

Armut: I’m not the main shotcaller, but I’m trying to be proactive and give out [as much] good information as I can. So if I see a good call, I just say it. Playing tanks or carries kinda doesn’t matter, but of course if I have a winning lane it’s more comfortable to talk, so it seems easier for me if I’m winning lane.

Hotspawn: Well speaking of winning lane, if there’s anything we learned in this Play-In group it’s that if you’re playing against Andrei “Orome” Popa, chances are you’ll beat him in lane– no disrespect towards him, of course. What are your thoughts on the top lane matchup from this series?

Armut: [Visibly breaking down in laughter ] Well I would say he’s doing his job for his team. He’s playing carries sometimes, he’s playing tanks sometimes; maybe his carries aren’t as good as his tanks. I mean he’s a good decent player.

Hotspawn: And how did you feel about how MAD played as a team that series? Did you expect it to go to five games?

Armut: Hmm… they won against us two games, so I’m just saying we aren’t good as a team, Supermassive, and I’m also saying they aren’t good. We’re both bad I think.

Hotspawn: [Laughs] Well, keeping that in mind, you do have a match tomorrow against Unicorns of Love, do you think you guys can become a good team by then?

Armut: [Laughs] Yeah we’d like to do that. Otherwise all the things we did will feel kinda empty if we don’t win tomorrow. There’ll be a lot of pressure, but I don’t care about pressure to be honest. I’ll just play my game, I don’t care about anything else. I mean we kind of have a huge chance against UoL. Maybe MAD Lions were a bit stronger than them, but had a bit weird drafts. So if we win draft, we will win the game.

Hotspawn: Now you’ve been vocal about wanting to meet your old rival Sergen “Broken Blade” Çelik in the Main Group Stage. For a lot of Turkish Championship League players I’ve spoken with, they say that playing in a major region like BB is the goal, but do you feel differently? Would you want to continue representing Turkey or play in NA or EU?

Armut: I think this year, if I have a really good roster in Turkey, I’d try to stay here and represent my country. But many people will leave after this year or retire, so we’ll lose some strong Turkish players after this year. So I want to go outside of Turkey if I can. I hope I can.

Hotspawn: There are a lot of players from the TCL starting to shine in major regions. Should teams start looking more in that region for scouting purposes?

Armut: I mean not just TCL. They should watch all the minor and major leagues, you never know what you’re gonna find. But yeah I would say TCL has a lot of players with potential.

Hotspawn: Shifting gears a bit, there was a tweet shared after you had that incredible Shen game earlier in groups that was retweeted by who I can only assume is your father.

Hotspawn: He said you’re the best top laner in the world in his opinion. If you don’t mind sharing, what’s your relationship with him like? Has your family always been supportive of your pro career?

Armut: Yeah like my family is all doctors, so they just wanted me to become a doctor as well when I was a child, but I didn’t become one [laughs]. But they are still supporting me, especially my father. He’s a really famous doctor in Turkey so I’m happy to have him as my father.

Hotspawn: Well maybe you can use the Surgeon Shen skin for him!

Hotspawn: Right now a lot of people have their eyes on you and I’m sure if you checked Twitter right now your followers have been shooting up. Anything about yourself that you want to share with your new fans?

Armut: Hmm… let me think about this one. [Laughs] I don’t know, I like being famous. I like people watching me, you know? I like to be famous, I love being famous.

Hotspawn: [Laughs] Well you’re getting your wish! Anything you want to say to your fans supporting you before we part ways?

Armut: Thanks for all the support. I’m getting so many messages I can’t open my phone. Well, okay, I can open my phone, but it’s too much, you know? But thanks for everything.

SuperMassive will play a best-of-five Unicorns of Love on Wednesday, September 30th at 11 p.m. PDT for a shot at qualifying for the Main Group Stage.