Kaiser: “We will become a really strong team” 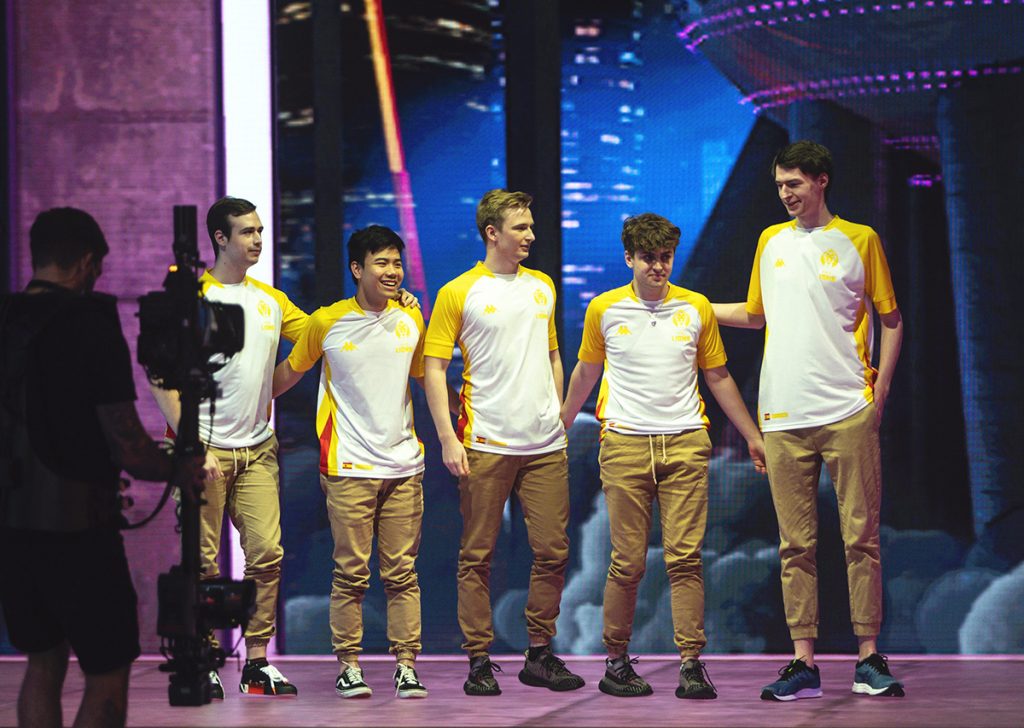 Despite going 1-1 on the first day of Play-ins, Kaiser is confident that MAD Lions will improve as the tournament goes on (Photo via David Lee | Riot Games)

MAD Lions wrapped up the first day of the 2020 League of Legends World Championship Play-in Stage with a 1-1 record across two hectic games. Back in Europe, they were known to dictate the pace of games, however, in both their victory against INTZ and loss against Team Liquid, there were times when they were swept up in their opponents’ game plan.

Heading into the rest of Play-ins, MAD are still favorites to advance to the Main Group Stage despite their middling performance out the gate. We caught up with MAD support Norman “Kaiser” Kaiser who weighed in on how the team spent quarantine, his thoughts on North America’s chances at Worlds, and the squad’s steady improvement.

Hotspawn: It’s your first international tournament. Despite going 1-1 today, how’s the entire experience been for you so far?

Kaiser: I think everything was pretty fun. Of course, the quarantine was a bit…different, I guess, to say the least [laughs]. Two weeks in a solo room is a bit hard for everyone, but I’m glad that we got out of it and that we’re playing on stage again and scrimming again together. It’s been a really fun experience, for sure.

Kaiser: Yeah, for sure. We played some games with the G2 guys and with Fnatic guys. We are all pretty active in the Among Us community. Mainly we’re playing with our staff members, MAD Lions players, with our coaches. We’re all pretty active [laughs]. So there were a lot of Among Us memes as well going around. It’s a pretty fun game.

Hotspawn: Who would you say is the best imposter on MAD Lions?

Kaiser: Imposter? Hmm… I don’t think there are any good imposters on our team actually I think they’re all just pretty bad [laughs].

Hotspawn: [Laughs] Not a single one?

Kaiser: I think the best is probably Marek “Humanoid” Brázda because he has a lot of experience!

Hotspawn: A lot of experience deceiving people or just playing the game!? [Laughs]

Kaiser: [Laughs] I mean we’re all pretty new to the game, but Marek introduced us so I guess it’d be him.

Hotspawn: So of course you’ve also been playing a lot of solo queue in quarantine on the super server. Did you pick up anything new playing in China?

Kaiser: I mean, there’s not that much new stuff. The meta’s obviously a bit different. There’s a lot more aggressive picks and a lot more weird picks. For example, I saw a lot of Lux support with Comet just going full AP in your face, and that was kinda weird for me. Maybe some other different stuff too like mages bot lane, which you usually don’t really see in Europe. The main difference is that the playstyle is super aggressive. In EU, it’s usually a lot of macro, farming a bit. Of course, it’s still a bit aggressive, but Chinese aggression? It’s insane.

Hotspawn: You know, you were a support that was rated pretty highly coming into the tournament especially because of your champion pool. You whipped out the Pantheon game one, which is a champ people are expecting to be popular this year, but have you been working on any other picks? Do you think there are any champions that have been overlooked? Of course, you don’t want to leak all of your strats.

Kaiser: Well I don’t want to reveal too much of my champion pool, but we have some stuff prepared. Of course like we saw in our last game, Twitch-Rakan is pretty sleeper I would say; people are picking it up nowadays. It was pretty sleeper before, but now it’s really strong so I think more people will pick it up. I think probably Alistar is also pretty sleeper. He got buffed a bit and I think he’s also a good champion. But we’ll definitely be seeing a lot more Rakan at Worlds.

Hotspawn: Why do you think the support meta is leaning more towards those playmakers?

Kaiser: I think it’s probably all about engaging and forcing fights. In a carry jungle meta, for example, when Evelynn, Hecarim, Graves, Nidalee are meta, they all need setup. They don’t bring much CC themselves, so you kind of need it from other roles and support is the role that usually has a lot of CC. So you see a lot of Nautilus, Leona,. Stuff that sets your team up for success I guess. The Graves and Nidalee just bring the damage, right? So if you move as a two-man with Graves and Leona or something, the jungle is just not safe because they can always one-shot in any bush. I suspect the meta to be full-on tanks. Maybe a Lulu here and there, but just as a counter-pick, usually.

Hotspawn: So going back to today’s games, what were your thoughts on playing TL’s bot lane? How well do you think their bot lane played against you guys?

Kaiser: I think NA is pretty fairly rated, maybe a bit underrated. Their teams are pretty decent, maybe not as strong as the top-tier teams from Korea or China, obviously not. Maybe they can beat the fourth seed of some regions from Europe or China [laughs]. In general, I think NA is probably the fourth-best region after EU, China, and Korea of course. People are saying NA will never win a game at Worlds or something, I think I disagree with that. They can bring upsets and some of their teams have pretty wild playstyles as well and special picks like Søren “Bjergsen” Bjerg’s Zilean or something. I think they can for sure take games off of some top-tier teams.

Hotspawn: This is about your prep with the team heading into Worlds. We saw you guys slow down towards the end of the Summer Split in terms of your level of performance. What did you guys focus on improving for Worlds once you arrived in China?

Kaiser: I don’t think we were focusing on anything at the start. What we were doing was we were playing against some really good teams and they really showed our flaws in our gameplay and from day to day there were more ideas on what we had to fix. That’s what kind of helped us a lot. Every scrim we fixed more and more mistakes and I think over the last couple of weeks we got a lot better. We couldn’t really show that today on stage. I think the first game was really shaky, and the second game as well. So I think as Play-ins go on and if we make Groups we will become a really strong team, but I think right now we still aren’t ready for the stage yet I guess [laughs].

Hotspawn: Best of luck with that! Last question: do you think we’ll see any more of those post-game skits you guys were famous for doing in LEC here at Worlds?

Kaiser: We talked a bit about it [aughs]. Maybe it’s a bit harder on the world stage. Maybe if we get to the Main Group Stage or something. It’s hard to say.

Hotspawn: Okay, so if you make it to groups that’s the reward for the fans, they get to see more post-game antics, got it.

MAD Lions play their next match on September 26 at approx. 6 a.m. PST against Papara SuperMassive.