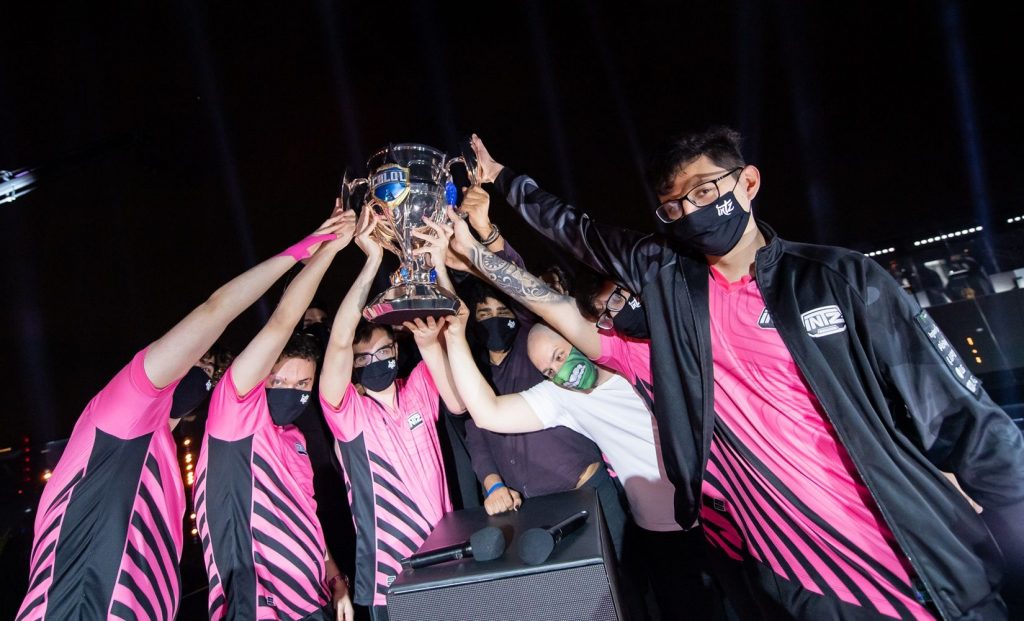 In mere hours, after what has felt like a decade of waiting, we’ll finally witness the start of the League of Legends World Championship. Twenty-two teams from all across the globe meet in hopes to take home the Summoner’s Cup. For ten teams the first obstacle is the Play-In stage, where the lowest seeds from the LPL, LEC, LCS, and PCS battle among six teams from minor regions.

Two of those minor regions are the Campeonato Brasileiro de League of Legends (CBLoL), the Brazilian competition, and the Liga Latinoamérica (LLA), the competition encompassing the Spanish-speaking countries south of the United States. In this article, we’re giving a rundown of the representatives of the CBLoL and LLA so you know who you’re looking at when the Play-In stage commences.

The wild ride of INTZ

At the start of 2020, INTZ made a bold choice. The team decided to go with a 10-man roster approach in the most literal sense of the term. Whereas sometimes teams might opt for this strategy and use a ‘backup roster’ to sometimes substitute a player in, INTZ made their players compete for their spots at all times. It put a noticeable strain on the players. All of a sudden the veterans on the roster were juggled around. The constant uncertainty cost INTZ dearly as their performance was simply abysmal. They finished the first Split as seventh out of eight teams with one of the most expensive rosters in the league. In a promotion/relegation match that would determine if INTZ would even remain in the CBLoL, they barely escaped with a narrow 3-2 victory.

Evidently, this team needed a completely different approach for the second Split. Coach Lucas “Maestro” Pierre went back to the standard 5-man roster and settled on the veterans who had been on the team for years, with some players even going back four years. While the competition remained close—the CBLoL overall had a tense second Split—INTZ was reborn. They ended the regular Split as second and trampled crowd favorite paiN Gaming in the grand finals with a 3-1 score. From almost relegating at the end of the first Split to emerging as the best just one Split later: INTZ’s experimentation threw them down a wild ride in the CBLoL

Even though INTZ now plays together as a team, banking on the synergy build by the seasoned players on their roster, they’re not at all perfect. When it comes to their gameplay, their early game is a painful point. INTZ likes to take things slow, and they fumble early fights. It’s almost as if they enjoy making it unnecessarily difficult for themselves and climb back into the game later on. Against teams who don’t shy away from playing a precise, aggressive early game, like the MAD Lions, for example, INTZ can struggle. These teams will relentlessly take over the early game and not let go of the lead they have acquired.

INTZ has two redeeming factors. Firstly, their preparation is on point. It’s rare that an enemy will surprise INTZ in the pick/ban phase, or play a style that INTZ hasn’t anticipated. This will become an especially powerful tool for INTZ in the Playoff stage of the Play-Ins if they manage to reach it as they’ll play in a best-of-five setting, giving them more shots at nullifying their opponents’ strategies. Secondly, INTZ has an incredible mid-game and late-game. They know exactly what their plan is and will not allow themselves to be tempted at deviating from a path that leads to certain victory. INTZ plays with determination, and it is this determination that will have to carry them to the Group Stage and represent CBLoL.

For years on end, Lyon Gaming was not just a team competing in Latin America; they were the team. But that brand, despite all its success, was tarnished by several conflicts. Eventually, Lyon Gaming went down and out of its ashes, Rainbow7 was born. But the legacy of Lyon Gaming’s turbulence carried on. Rainbow7 kept disbanding, throwing together new teammates, and the drama stirring on the organizational side of the team impacted the players continuously. Thankfully, the results in the first Split were quite decent. Rainbow7 comfortably finished among the traditional top four of the LLA. They finished third overall, and it seemed like a few tweaks could get them to the top.

Rainbow7 didn’t make a small change, though. They moved mid laner Francisco “Leza” Jara to the bot lane position and brought in Tomás “Aloned” Díaz. But what was supposed to improve the team’s performance didn’t kick off well at all. Rainbow7 had the questionable honor of almost bridging the gap between the traditional top four teams in the LLA and the bottom four teams who have historically had little to say in the league. But when the Playoffs came around, Rainbow7 just clicked. Not every match was clean by any means, but the team boldly fought its way to the grand finals where they met All Knights, who were looking undefeatable. It seemed to be a quick end to Rainbow7’s miraculous recovery. 0-2 down, the chances were slim. But they weren’t quite done yet. After a nailbiter of a third game, Rainbow7 completed the reverse sweep and made it to the Play-In stage.

More than anything, Rainbow7 has skilled individuals. Jungler Brandon Joel “Josedeodo” Villegas and support player Facundo “Shadow” Cuello count as exceptional performers in their role, and they’ve often held the team together in the face of adversary. The individual prowess of the Rainbow7 squad is impressive. But the most iconic feature of this team is both a positive and negative characteristic, depending on the circumstances: they’re unpredictable. And not in the sense that they calculate how to throw their opponents off guard. No, the Rainbow7 players are impulsive.

In the LLA, Rainbow7’s impulsivity led to them playing incredibly aggressive in the early game. If they thought they could catch someone, they’d jump in headfirst without thinking of the ramifications their decision might have if the attempted play would go wrong. They banked on their skill and knowledge of how to pilot their champions to maneuver themselves past opponents. But this explosive attitude can greatly backfire for Rainbow7 when they’re met by teams who do have a game plan thought out and who know how to counter early aggression. Rainbow7 has the talent to be surprising, but they need to compose themselves to make it happen.