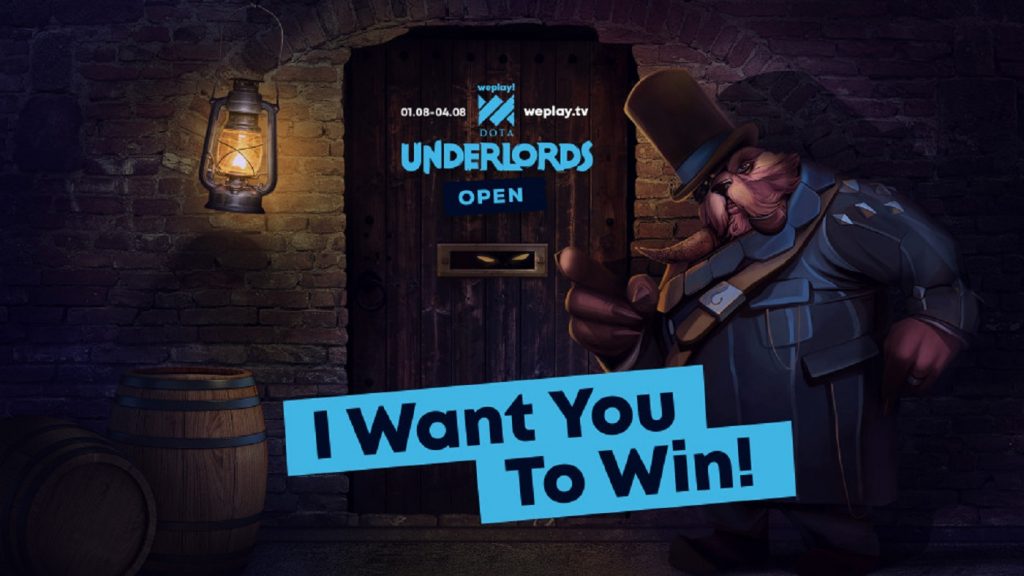 With it’s US$16,750 prize pool, the WePlay! Dota Underlords Open deserves the attention of fans of the new autobattler genre. The finals will get underway August 1-4, with 16 players plucked out of open qualifiers competing for their own slice of the prize.

That’s right: every competitor at the Underlords Open earned their spot through open qualifiers, which ran July 24-29. 5082 competitors were whittled down to 16. Finalists came from seven different countries, including Canada, China, Indonesia, Russia, Thailand, Ukraine and USA. They have now been divided into two groups (or gangs!).

The first, the Vicious Order, includes NiroTime, maxbringtheaxe, Yca4, Cmel, Ciaoknives, Trumad and rist. They will compete beginning at 3:00 pm CEST/ 9:00 am EST on August 1.

Each group will compete in five matches on day one and another five on day two. On August 3 and 4, the two gangs will meet to play five matches for the last two days, beginning at 8:00 pm CEST / 2 pm EST.

Eugene Luchianenco, Head of Esports at WePlay! Esports, addressed the prize pool, which was increased from an initial $15,000 to the current $16,750. He said in a press release, “Each finalist of WePlay! Dota Underlords Open went through a tough challenge to advance from open qualifiers into the playoff. With that in mind, we decided to expand the prize pool of the event to encourage the best players. In addition to the standings announced earlier, there will be prizes for players who’ll do their best and take the 5th-8th places after the main stage of the tournament.”

The event itself will have an underground gangs theme; WePlay! suggests it will be a world similar to that in Gangs of New York. Casters will be paired with each of the gangs, rooting for their success in a Godfather-esque role. Perhaps some kind of pep talk for his gang is what Joel Larsson meant when he said in his recent interview with Hotspawn, “I’m having a pretty interesting media sequence in WePlay! broadcast, so I’m a little bit nervous about that, but I’m sure it’s going to be fine.”?

The broadcast team will be hosted by Robert “RobAJG” Gonzales, while Shannon “SUNSfan” Scotten, Sean “swim” Huguenard, David “ImpetuousPanda” Nolskog and Joel Larsson join as casters.  While this is not a LAN event, the broadcast team has assembled in Kyiv, Ukraine at the WePlay! studio to provide coherent and entertaining narration to the games across the four days of the events.

WePlay!’s unique approach to tournaments should make this one well worth tuning into whether you’re a fan of Dota Underlords or esports in general.

You can catch all the WePlay! Dota Underlords Open action beginning August 1 on the WePlay! Twitch channel.