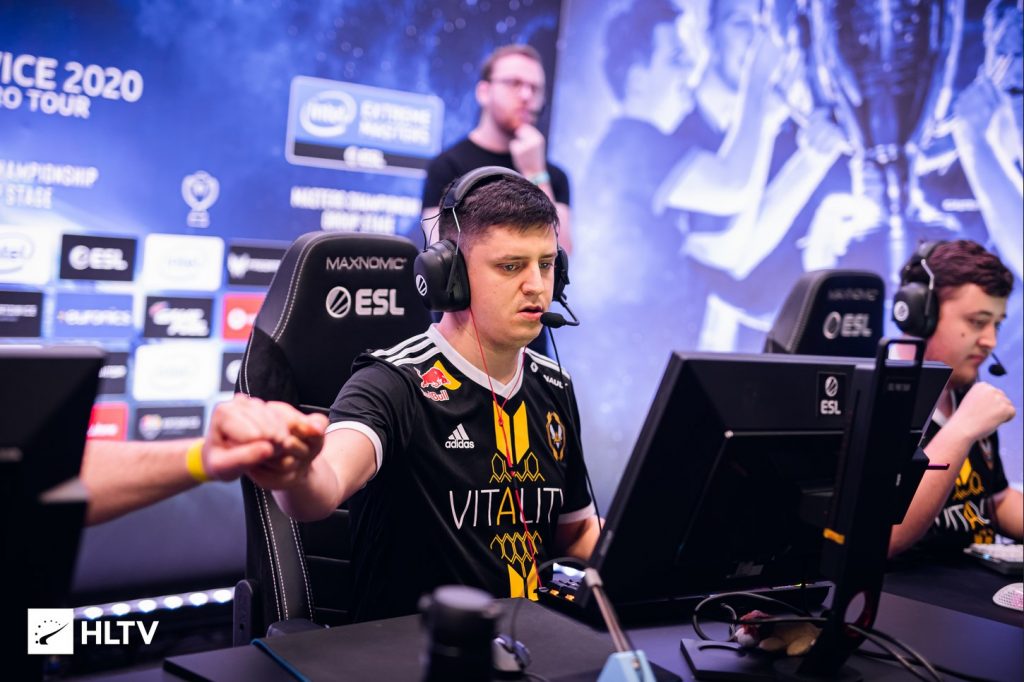 Vitality have made it to DreamHack Open Fall grand finals after taking down NiP, BIG, and Astralis (Photo via HLTV)

DreamHack Open Fall’s playoff stage has reached its climax. The 12 teams who advanced from the group stage in hopes of taking home the crown have been narrowed down to just four. Team Vitality and Astralis have dominated the upper bracket, securing top three finishes after just two matches played. Coming from the lower bracket are Heroic and Ninjas in Pyjamas who each took down strong candidates to run the gauntlet.

Team Vitality’s road through the Dreamhack Open Fall playoffs started off against Ninjas in Pyjamas. NiP were heavy underdogs after they finished second seed in the group of life, and the match quickly reflected that. Mirage was up first courtesy of the Swedes. Although they managed to win the T side pistol round and take a 3-0 lead, NiP could have done a better job snowballing it. Instead, Vitality was able to bounce back and earn an 8-7 advantage at the half.

The second half was hardly a competition. NiP won the second pistol round as well before immediately losing to a Vitality force buy. The momentum swing was enough to allow the French squad to run rampant on their attack. A comfortable 16-10 was the result, giving Vitality match point. Nuke was up next and ended up even more one-sided. After putting up a 10-5 T side performance, Vitality held NiP to just one round on their way to a 16-6 and the clean sweep.

Vitality’s next opponents were BIG. The German side had just come off of a tight 2-1 against G2 Esports and looked more vulnerable than usual. The last time these teams met was three and a half months ago with BIG taking the win. Now, Vitality was out for revenge.

Map one was BIG’s Dust2 pick. Despite BIG starting off with a 3-0 lead on the T side, they quickly ran into a wall. Vitality’s first set of guns took them to a 7-4 lead which turned into an 8-7 half. Any hopes that BIG had of taking their own map were erased after Vitality stole the second round force buy then won six of the next seven. Dust2 belonged to Vitality after a 16-11 finish.

Inferno was more of the same. Vitality’s T side was crisp and effective, allowing them to gain a 9-6 halftime lead. BIG couldn’t match the pace of their opponents and fell by the wayside. Another 16-11 score line gave Vitality their second clean sweep of playoffs and a spot in the upper bracket finals.

Awaiting them there was Astralis. The current top-ranked team had a very easy run up to this point with their hardest opponent being the 12th ranked Fnatic. Astralis actually tried a somewhat unorthodox Dust2 first pick in that series. The move ended up backfiring as Fnatic destroyed them 16-7 on the map, denying Astralis their 2-0 sweep.

Vitality took that information and chose Dust2 as their map pick. However, Astralis’s signature Nuke was up first. The Danish squad had an insane 13-1 record on the map in the past three months and would see their dominance continue. Astralis took map one 16-4. It was the second quickest win in all of the playoffs behind their 16-3 against GODSENT on Inferno.

Now that they were on Dust2, Vitality looked like they completely forgot the beating they just took. They managed to take a 7-4 lead from the T side, although Astralis still managed to stay competitive with an 8-7 finish. The real kicker came in the second half. Vitality completely shut down Astralis’s plan of attack, holding them to just two rounds out of 11. The 16-10 result tied the series at one map apiece.

It all came down to Overpass. Vitality had the pleasure of continuing their CT side momentum and took over the game early. Three players on the French side had over 100 ADR in the first half as Vitality crushed Astralis flat. A 12-3 score at the half gave Vitality an overwhelming advantage. Astralis tried their best to come back, but to no avail. The 16-11 finish guaranteed Vitality a spot in the Dreamhack Open Fall grand finals while Astralis dropped to the lower bracket.

One of the bigger surprises of the Dreamhack Open Fall group stage was Heroic losing to G2 in the group B decider match. As a result, the second highest-ranked team in the world started playoffs from the lower bracket. Heroic did a good job at identifying their issues and ironing them out.

Their first match came against North. Heroic started slow on their Nuke pick, allowing North to bring the game to overtime. It took two extra periods for Heroic to finally claim their own map pick. Vertigo was where the favorites started to turn things around. After a slightly below average 7-8 defense, they won the first eight rounds of attack in a row putting them on match point before North could respond. A 16-10 finish put Heroic through to the next round.

Next up was Sprout. It was an unusual series that features both teams looking much better on their opponent’s map pick than their own. Sprout only found five rounds of T side on Mirage, allowing Heroic to take a 10-5 lead leading to a 16-11 victory. Train was a similar story with Heroic only taking four rounds of offense before Sprout evened up the series with a 16-10. Nuke was the decider map. For once in the series, the team who started on the attack took a big lead. Heroic flew out of the gates to earn a 10-5 start. They then finished the series with a 16-12 to stay alive.

Heroic’s next match was against BIG. Every map was a complete blowout with each team winning their pick. Heroic easily took Vertigo 16-5 after a 13 round defense. BIG’s Mirage started with them taking 11 rounds on the attack then holding Heroic to just eight points overall. Once again, Nuke would be the deciding factor. The Danish side held strong on the CT side to earn a 10-5 lead. They then had a flawless T half to secure a 16-5 win and a spot in the top four.

Ninjas in Pyjamas are the most interesting story of the top four at DreamHack Open Fall. Although they fell to the lower bracket after one match, they found themselves against many teams who were also struggling. The result was an unexpectedly clean gauntlet run to the end.

Their first match in the lower bracket was against FaZe Clan. The winners of IEM New York EU had gotten third place in their group behind GODSENT and still looked shaky here. FaZe’s Inferno pick immediately went bad when NiP held them to just four rounds on the T side. They did nearly bring it back, but NiP stayed just ahead of the curve to steal their opponents map 16-13. Overpass was much closer with each team taking an 11-4 CT half. Three overtimes later, NiP secured their 2-0 sweep with a 25-22 win.

OG was next in line. NiP immediately took control of the game on OG’s Nuke pick. A dominant 13-2 CT half turned into a 16-4 finish. The Ninjas then confidently closed out a game on Train 16-10 after starting each half by winning seven of eight rounds.

A Swedish brawl awaited them in the form of Fnatic. It was yet another fairly standard match with each team winning their own map. NiP continued their Overpass picks and won 16-12 despite starting at a 1-6 deficit. Fnatic then won on 16-11 Inferno with a six round win streak to close the game. Vertigo would be the final map in the series. A 9-6 half time lead for the Ninjas left the map open. That was until they won six of the seven opening rounds on offense to earn match point. NiP earned their top-four spot after the 16-10 victory.

Only three matches are left to crown the winners of DreamHack Open Fall. Vitality already has one foot in the door with their spot in grand finals. They have also beaten two of the three squads left in the running, making them the clear frontrunners.

As for the rest of the field, every extra win here guarantees more RMR points. Heroic and NiP will face off on October 24 with the winner playing Astralis later that day. The grand finals will take place on October 25 at 1:00 P.M. EST.