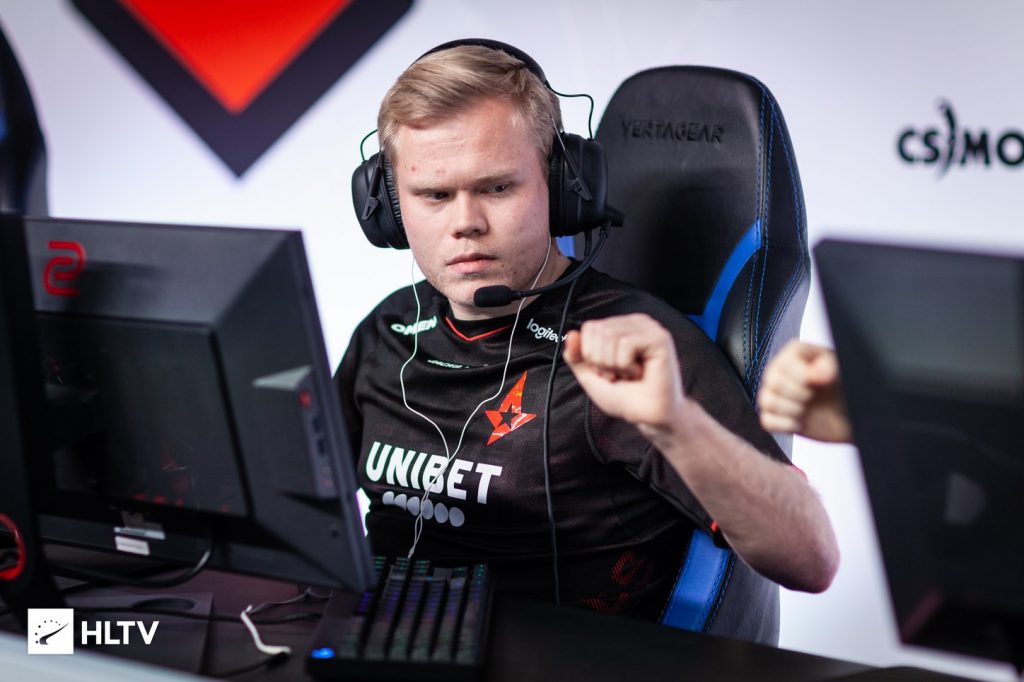 DreamHack Open Fall’s group stage has come to a close. Whereas Group A was seen as a competition between all four squads, Group B was mainly about seeding the top three. Astralis started strong at Europe’s final RMR event of the year, taking down Heroic and G2 Esports to earn first seed. G2 then bested Heroic in the decider match to take the final upper bracket spot. Heroic will be starting their playoff run from the losers’ bracket.

The most anticipated matchup of the entire group stage happened on day one. Current rank one team Astralis was set to take on the rank two Heroic squad. Danish supremacy was on the line in addition to a spot in the playoffs.

The series started on Vertigo and stayed there for a while. Two back to back 8-7 CT halves resulted in overtime right off the bat. DreamHack’s unique $10,000 OT rules kept both teams in check as taking two rounds pretty much saw the third be guaranteed. In the end, it took four extra periods to decide a victor. With a score of 28-24, Astralis took home map one.

It was on to Astralis’s home pick of Train. However, the series would not stop here. Heroic put on a CT side clinic, shutting Astralis down at nearly every turn. Even when Astralis found their clean entry into a site, Heroic were on top of their retake efforts. The most egregious came from Martin “stavn” Lund who earned an ace defending the B bomb site.

Heroic was able to close out the map comfortably with a 16-8 score line. A third map would be required to settle the score between the Danish giants. Inferno was a tale of two CT halves. Heroic started out on the defense and only managed one successful bombsite retake. The result was a narrow 8-7 lead. Astralis on the other hand found a total of five bomb defuses. Their retake success rate was the difference maker, allowing Astralis to take home the win 16-13.

One Sided on Three Maps

The winners’ match took place between Astralis and G2 Esports. Both teams came into the series prepared for their map picks. Astralis’s signature Nuke saw them take 11 rounds on the T side. The Danes then effectively stopped G2’s efforts to do the same. Not a single player earned a positive K-D ratio as Astralis closed out a decisive 16-6.

In their efforts to one up their opposition, G2 sent the series to Dust2. Now starting on the T side, G2 absolutely dominated the Danish defense. Only two rounds went the way of Astralis as G2 took an uncontestable 13-2 lead. A short but perfect second half saw G2 take the 16-2 victory.

No one knew what to expect going into Inferno. It turned out to be Astralis who has put in the work on the map. They were able to put together the third double digit opening T side of the series, taking a 10-5 lead with Emil “Magisk” Reif leading the way at 18-7 with 92.9 ADR. G2’s only saving grace was the AWP of Kenny “kennyS” Schrub. Unfortunately for them, the AWP doesn’t translate well to the T side. G2 sputtered out, leaving Astralis to claim the 16-6 win and first seed in the group.

G2 Through to Upper Bracket

The last match of group B featured G2 and Heroic in a bid for the last upper bracket playoff spot. The match was similar to the previous outing as both teams came ready to claim their own map picks. Heroic whipped out the Overpass which G2 almost never play. Although the French-Serbian squad was able to take nine rounds on defense, Heroic fired back by winning 10 of 11 in the second half to complete a 16-10.

G2 responded with a Vertigo pick which was Heroic’s statistically worst map. A very aggressive T side setup allowed G2 to win 11 rounds before swapping sides. Their defense was anchored by kennyS once again, allowing G2 to even up the series with a 16-11.

The last dance came on Inferno as it usually does. G2 found the advantage early by winning eight of the first 10 rounds of the game from the T side. Although Heroic clawed back to a 6-9 deficit, it was enough for G2. After losing the pistol round and their initial buy, G2 found their footing with three successful retakes in six rounds. Heroic slowly bled out of the game as G2 hit match point with two rounds to go. The death blow came swiftly as G2 secured the 16-13 victory.

Astralis and G2 Esports have finalized their position in the upper bracket of the DreamHack Open Fall playoffs. Their initial matchups of Astralis vs GODSENT and G2 vs BIG happen on October 19th. Meanwhile, Heroic will await their opponent in the losers’ bracket with only one mistake sending them packing.