Top Esports Get Over Hump in Mid-Season Cup Win 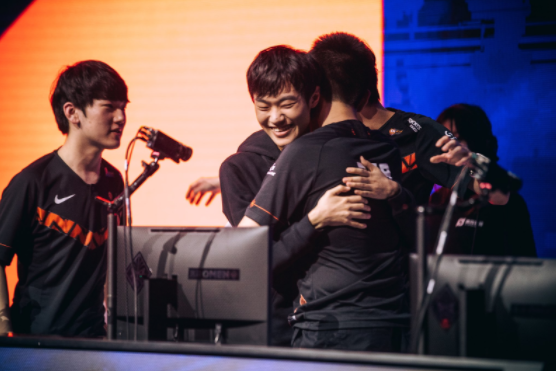 After a dominant group stage that saw three of the four LPL teams advance to the semifinals, it was no surprise that the finals ended up LPL versus LPL action. FunPlus Phoenix avenged their 2020 Spring Split semifinals loss to JD Gaming 3-1 to advance first, followed by Top Esports orchestrating a quick 3-0 sweep over Gen.G.

Top Esports then took a decisive 3-1 win over FunPlus Phoenix to win their first big title as an organization. The team built upon their late-season surge with JackeyLove to come out on top of a field that featured the four best teams from Korea and China. Top Esports now have to be considered one of the best teams, if not the best, in the world.

TOP GETS OVER THE HUMP

Top Esports have been a good team, but never a great team. They finished third in the 2019 Spring Split before falling to FunPlus Phoenix in the semifinals. They then finished second in the Summer Split before losing to Royal Never Give Up in the semifinals. They lost 2-3 to Invictus Gaming in the Regional Finals to miss out on the World Championship. Most recently, they lost 2-3 to JD Gaming in the 2020 Spring Split Finals. Always close, but TES have never been able to close it out.

Took us years of effort and hard work, struggling and advancing, finally it’s our turn to claim the trophy
It’s our first championship, and we see many, many more to come.

Applause and ggs to @FPX_Esports , it’s a day that #LPLWINS.
The future is OURS. pic.twitter.com/eSgQLHwgis

That narrative finally changed in a big way as TES bested a field of the four best LCK and LPL teams. You can forget about pretending teams didn’t care about the tournament considering the $600,000 USD prize pool, not to mention the regional pride at stake. Every team was giving it their best, but Top Esports were just on another level.

Top Esports had been building up around star mid laner Zhuo “Knight” Ding since his debut with the team, but the squad has really taken off with the acquisition of Yu “JackeyLove” Wen-Bo. The ADC shot caller has revolutionized both TOP’s macro play as well as well as their mechanical skill ceiling. Considering the qualities he’s offered the team in his short stint, it’s fair to say he might be one of the most valuable players in the world.

But he and Knight didn’t win this tournament by themselves. Bai “369” Jia-Hao went from an inconsistent carry threat in 2019 to a rock for TOP in the top lane. Hung “Karsa” Hao-Hsuan looked washed up to begin the split after coming over from RNG, but he’s been revitalized playing with JackeyLove and got the best of his matchup with Gao “Tian” Tian-Liang. Support Liang “yuyanjia” Jia-Yuan looks to have finally locked down the starting role after a great series against FPX, highlighted by a phenomenal game four on Thresh.

TOP have finally arrived as a team that can come through in the big moments. Considering their raw talent, that’s a scary thought for the rest of the world.

FunPlus Phoenix may have lost in the finals, but they still got something very valuable out of the tournament. After a season of going back-and-forth between new signee Kim “Khan” Dong-ha and World Champion Kim “GimGoon” Han-saem, FPX looks ready to move forward with Khan full-time. He showed why FPX will be a better team for it in this tournament.

Kayle for Khan as FPX look to bounce back into this series! Game 2 coming up! #MSC https://t.co/oTycDZglmq pic.twitter.com/KpxOXC9Qs8

Khan absolutely neutralized Zhang “Zoom” Xing-Ran in FPX’s semifinals win over JD Gaming. That is something absolutely nobody else can say so far this year. Zoom has been the best top laner in the world and JD Gaming had yet to lose a series in which he played. On the flip side, Khan entered the semifinals with a worse team record than his own top lane teammates.

Khan didn’t have much to do in the game one blind pick Ornn versus Renekton matchup, but he was much more comfortable when real draft phases were involved. Khan picked Hecarim into Wukong in both games two and four, going a combined 13/6/10 to Zoom’s 7/11/10. In between, Khan played a perfect 0/0/9 game into Zoom’s Gangplank. Zoom may have held JDG in that game through his stellar play, but he was given no advantages by Khan.

Khan then went on to single handedly carry FPX in their only win over TOP in the finals. Playing Kayle into Ornn in game two, Khan picked up an early double buffs from an ill-fated Karsa gank and never looked back. Khan finished 10/2/8 and dealt a game-high 26.3k damage in the win.

Having GimGoon around will certainly provide FPX with a sense of comfort, especially if the meta drastically shifts away from any kind of agency in top lane. But Khan gives them the type of laner that can go toe-to-toe with the world’s best, and he proved it this weekend.

If there was one team who looked like they never really showed up all the way at the Mid-Season Cup, it was JD Gaming. As big as the prize pool is, they probably were most at risk of a hangover effect after winning their first title in the Spring Split.

GGWP @FPX_Esports! Best of luck on the rest of the #MSC.

Thank you to the fans for your continued support. Unfortunately we were not able to take it all. This time.

We are absolutely driven more than ever to improve our game.

See you all during the LPL summer split! pic.twitter.com/EaLzU1unMv

Following that narrative, the LPL Spring Split MVP Seo “Kanavi” Jin-hyeok had his worst series of 2020 in the semifinals loss to FunPlus Phoenix. Kanavi actually started the series off by carrying game one on a blind pick Nidalee, but he could not get anything going against Tian and FPX for the rest of the series.

It didn’t matter whether he was on Graves, Lee Sin, or Ekko. Kanavi got out-jungled in all three losses and finished a combined 3/16/19 in those games. FPX banned out his Nidalee in games two through four and Kanavi had no answer.

It didn’t help that Zoom was held in check throughout the series by Khan, as mentioned earlier. But JDG also had to go through the tough schedule of playing a tiebreaker late into the night on Friday before playing their best-of-five series against the rested FPX later that afternoon. Considering that and the potential hangover effect, JDG might just write their loss off as a fluke.

As runners-up to T1 in the Spring Split Finals, Gen.G had some expectations entering the Mid-Season Cup. Sure, they wouldn’t be a favorite, but the LCK would need them to perform well if they wanted to look better than the LPL. The rest of the LCK teams didn’t hold up their end of the bargain, but Gen.G came through in the group stage. Though they lost to DragonX, Gen.G beat both JD Gaming and Invictus Gaming of the LPL to advance to the semifinals. There was at least one LCK team that could stand up to the LPL bullies.

Our #MSC run ends here as we fall to TES. Thank you for supporting us during our run #TigerNation and we’re excited to see you again soon!#GenG #WeAreGenG https://t.co/zFwwj1HBJn

Gwak “Bdd” Bo-seong and Kim “Rascal” Kwang-hee were brought in to be star solo laners around Park “Ruler” Jae-hyuk, but both were consistently crushed by Knight and 369. Bdd picked up only one kill in the entire series, going 1/12/10 across the three games. Rascal didn’t fare much better, opening the series with a 1/7/3 dud on Sett and enabling 369 to pick up player of the game in games one and two.

Gen.G are still a good team and one of Korea’s best, but they still haven’t quite performed up to standard individually. They’ll need to find another gear if they want to take home any trophies in 2020.