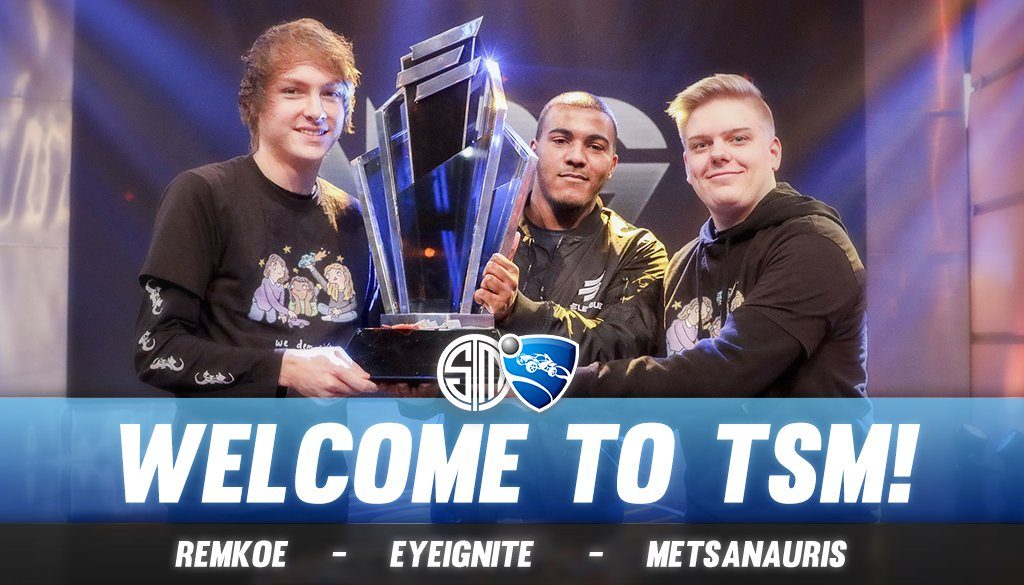 One of esports’ most well known organizations, Team SoloMid, has officially entered the Rocket League scene by signing We Dem Girlz.

The three men have been able to rattle the Rocket League scene since their entrance in Season Six. All of the players came from teams who looked good on paper but couldn’t seem to win the big one. Together they managed to secure third at the Season Six World Championship and capture the 2018 ELEAGUE Cup in December.

“We’re beyond excited to continue our journey under the TSM brand. It’s one of the biggest and most respected organizations out there with an amazing and loyal fanbase. We’re stoked to help bring the brand into Rocket League, and we will do everything we can to make the organization and its fans proud. Definitely, this is a dream come true for all of us.”- Team Statement.

Remkoe is a former World Champion with his win with Northern Gaming back in Season 3. Metsanauris has been in the Rocket League scene for several seasons and last appeared on CompLexity Gaming but has never managed to find the success he has had while with WDG. EyeIgnite has never been a popular face in the scene until he appeared with WDG. EyeIgnite first competed in the RLCS with Team Envy, where Remkoe acted as team captain.

It is no surprise that the We Dem Girlz squad was signed to an organization as they impressed the scene in 2018. Team SoloMid is a well-known organization that will hopefully treat the boys well. Not many TSM fans are familiar with Rocket League, so it should be an interesting experience as new fans flood into the scene!