SumaiL Out, as the One and Only Ceb Returns to OG 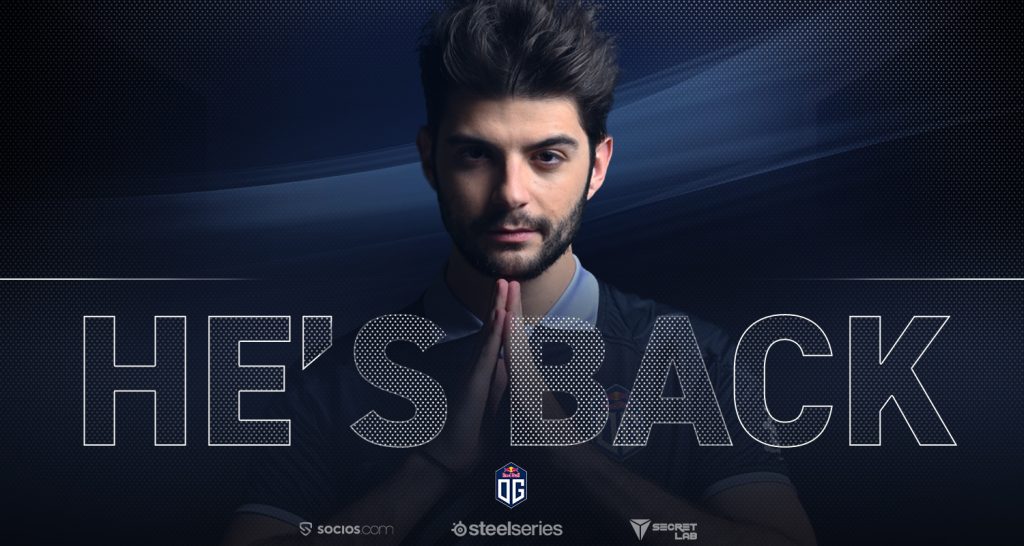 SumaiL may be gone, but there’ll be too many OG fans celebrating the return of Ceb to notice (Image via OG)

After shocking the Dota 2 world by joining OG at the start of 2020, Syed Sumail “SumaiL” Hassan is once again a free agent having departed the organization. The news broke on OG’s social media and official website on the afternoon of Saturday, June 25. But OG fans weren’t too heartbroken, as minutes later the team announced the return of Sébastien “Ceb” Debs to the main roster.

Today, we would also like to thank @SumaaaaiL for his time with OG, we wish him the best of luck for what will come next for him.

He is one of the best players in the world and a fantastic person to work with, we will miss him.#DreamOG pic.twitter.com/oVvpwUJpDO

SumaiL had joined OG after a series of dramatic announcements in January. With Anathan “ana” Pham taking another break, Jesse “JerAx” Vainikk’s retiring, and Ceb returning to a coaching role, SumaiL was part of a new lineup that was primed to take OG to new heights in 2020. Alongside Martin “Saksa” Sazdov, and Yeik “MidOne” Nai Zheng, there was no reason why a revitalized OG roster couldn’t’ become a dominant force in European Dota again.

The cold-headed offlane player of a lifetime, the unmatched starving will of OG and chatwheel god @Ceb is back.🌻

However, in the wake of the ongoing Coronavirus pandemic, and a switch to online tournaments, OG struggled to keep it’s roster consistent. With time zone differences, ping problems, and connection issues, it seemed like OG could never pull it’s full team together, instead relying on stand-ins, including the ever-reliable Ceb. When the team could all make a tournament, their performance was fantastic, but it seemed these events were few and far between.

OG remains tight-lipped on whether geographic or connection issues, or just the inconsistency in performance of the new lineup made this roster shift a reality. Rather, the team’s official statement gives a glowing review of SumaiL’s time with the team, and wishes him the best – Typical of the organization’s second-to-none handling of player departures and lineup shifts.

Instead, the real takeaway from this announcement is that Ceb returns with his typical fiery intensity and competitive drive. Quoted in the statement by OG, Ceb is as driven as ever: “I honestly kinda take offense in the simple fact that other teams think that they can beat us.” But even with that dramatic call-out to other teams, he seems to remain grounded as ever. On speaking about his teammates, and playing with them, Ceb described how he: “actually missed them a lot. We’ve been through everything together. Every game they play in which I’m not playing felt like a waste of my time. I enjoy playing with them more than anything else.”

Ceb’s return comes as the team makes its return to competitive play after a short break. At OGA Dota PIT S2, the squad will take on the likes of VP.Prodigy, Natus Vincere, Nigma, and Alliance for a chance to take home over $70,000 – But perhaps more importantly a chance to win a tournament without Team Secret automatically taking the top spot. The full announcement of SumaiL’s departure and Ceb’s return is available on OG’s official website.