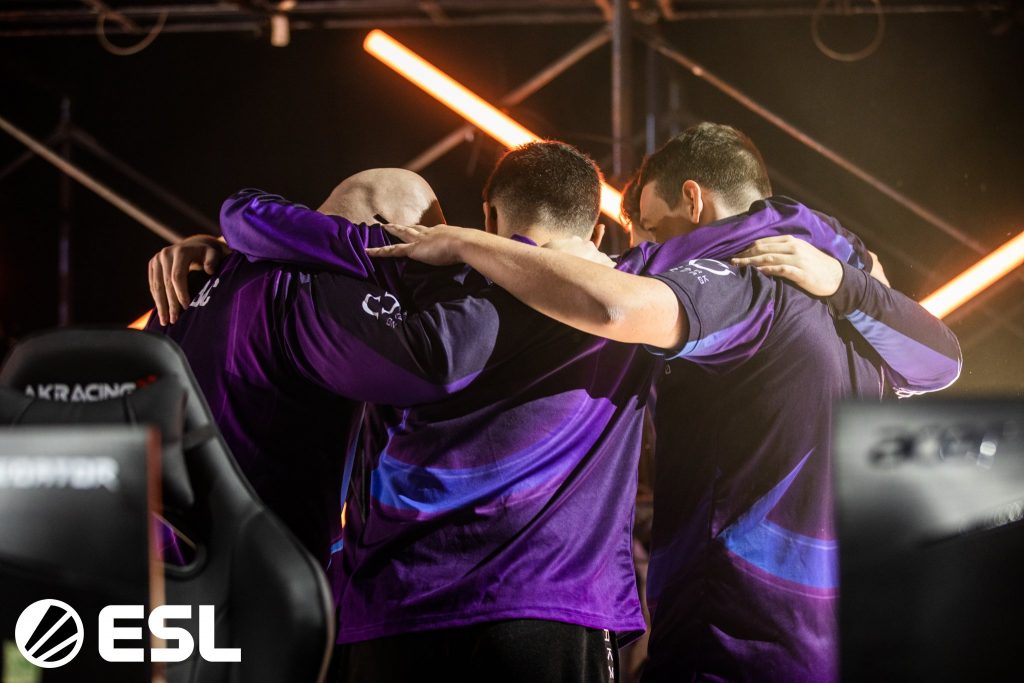 With the conclusion to the Rainbow Six ESL Pro League Season 10, worldwide roster changes are once again underway. Here we will record the changes NA and EU Pro League teams are making for the upcoming season of ESL Pro League and beyond.

The rumors come true as Giants Gaming announces it has sold its Rainbow Six roster to Rogue. With the acquisition, Rogue will now participate in the EU Pro League, after years in the North American Pro League.

Furthermore, the roster announces the signing of Jan “ripz” Hucke. ripz comes from the German team Orgless, who has been a part of that roster for years. Both Rogue and ripz begin a new journey with this announcement.

Rogue was eliminated from the NA Pro League in Season 10 and their players were quickly signed by various NA teams. Rogue making a return in EU marks a new journey in their Rainbow Six adventure. In addition, Rogue as an organization continues to establish their European presence, as they have a LEC team in League of Legends and the London Ravens in Call of Duty.

Dimitri “Panix” de Longeaux has been kicked from the BDS Esports line-up days before the return of the ESL Pro League. Panix continues his spree of misfortune as he will not attend his second Six Invitational in a row. The Swiss will now not be able to join a team until the mid-season roster lock lifts in February.

Replacing his is French support player Bryan “Elemzje” Tebessi, who recently played for Team Secret. Elemzje appears to be the best fit for the role in the French free agency scene. Elemzje was unofficially benched in December after a first-round exit at the OGA PIT Minor in Croatia. There is yet no official confirmation on who his Team Secret replacement is.

My kick from BDS

eUnited have joined the North American Pro League with the acquisition of the freshly promoted ex Obey Alliance roster. Joining the team is Léo “Alphama” Robine and Alexander “Yeti” Lawson. Read “Read” Adams will act as the temporary replacement for Alphama until his visa process is completed.

Alphama was the former Giants Gaming support player until he was benched from Giants after their poor performance at the Season 10 Pro League Finals in Japan.

We found one last gift under the tree. We are excited to announce that we are entering @R6esports
!

Team Vitality has signed two prominent European players to their roster. Daniel “Goga” Mazorra Romero will be joining the roster, after his recent department from G2 Esports. In addition, Lucas “Hungry” Reich has joined the roster after officially leaving PENTA Sports earlier today.

Team Vitality look insanely strong, gaining veteran support and fragging/IGL players to the team. With these changes, Team Vitality is reaffirming their move to an international roster, as the team started communicating in English during Season 10 Pro League.

Long-standing player, Lucas “Hungry” Reich has departed the roster. He was one of the team’s long-standing players. He has seen plenty of successful moments, as to their weak moments. The team will now be looking for a new IGL or fifth as they head to the Challenger League next season.

Today, we announce the departure of @Hungry_R6 from our #rainbow6 team.

Lucas has been a member of the team for over a year and has shown incredible skill level and dedication.

We're happy you represented PENTA and we wish you all the best in future endeavors.#ThisIsPenta pic.twitter.com/BmUFW0XBxx

GiFu has announced their roster changes after their recent relegation to the Challenger League. The two stars from the KKona KKopteri will be joining the GiFu roster as they look to re-enter the Pro League.

In addition, they have acquired Aaftab “Affy” Mohmed, the former KK coach.

Two 🇫🇮 talents: @OSKAMOSKA and @Kalenski99 will be joining @BounssiR6S, @movetaho and @jonitrr for the upcoming @ESLRainbowSix Challenger League season!@AffyR6 will also join the team as an analyst/coach and will give the team much needed support!

Two In, Two Our for Fnatic

Fnatic has made two roster moves in hopes of improving their six-man line-up. Departing the team is Ethan “RizRaz” Wombwell and Ryan “Speca” Ausden. RizRaz has spent the last four seasons on the team and will now retire from the scene. As for Speca, he is currently looking for a new home.

Let’s all welcome @SlashugR6 to the Rainbow 6 squad!

Thank you @Tomas_R6, we wish you all the best with your future endeavors. #LGLOYAL pic.twitter.com/f1R4qe8u3B

Luminosity has acquired Spencer “Slashug” Oliver from Rogue as Tom “Thomas” Kaka is benched from the line-up.  Slashug’s arrival to Luminosity will provide years’ worth of experience, dating back to Season 3 Pro League. He will provide valuable information and insight for a team that just finished their debut Pro League season.  Luminosity arrived in the Pro League in Season 10 after winning the auto-promotion battle at 92 Dream Team. The team of rookies finished Season 10 in fourth.

With Rogue’s exit of the North American Pro League, the roster has since been taken apart during the roster shuffle. So far, Slashug, Vertical and Ecl9pse have departed. Only Kevin “Easilyy” Skokowski and Aaron “Shuttle” Dugger remain.

According to ESL rule 2.11.6.3, at least three out of the five players from the season before must stay the same. Since this is no longer the case, Rogue will most likely lose their Challenger League spot. They have already lost their USN final spot to TSM.

I'm extremely excited to be rejoining EG this time as a player. It has long been a dream of mine to play professionally and I am incredibly excited to see what we can do together on EG. You can look forward to us playing in USN in Mid December and in the Invitational Qualifiers. https://t.co/hFF95VbKEm

Evil Geniuses and TSM trade talent as Aaron “Gotcha” Chung re-join Evil Geniuses, only this time as a player. He will take the place of Emilio “Geoometrics” Leynez Cuevas, who will now join TSM’s active line-up.

Tempo storm will enter the NA Pro League in 2020 with the acquisition of the 2Faced roster. The team qualified for the Rainbow Six NA Pro League in November as they took out Rogue. The team was only formed in July and is one of North America’s greatest underdog stories so far.

DarkZero is thrilled to announce that @Ecl9pse has joined our R6 roster! Tyler brings with him years of Siege experience and a proven history of excellence in competition. @BrandonCarrDZ is back to coach/GM and leading our program into the future!#GoingDark pic.twitter.com/91Y3DsJqwA

DarkZero signed Rogue’s Tyles “Ecl9pse” McMullin, who will tale Brandon “BC” Carr’s starting spot. Ecl9pse will make a new home on this roster, after a disappointing 2019. The world knows he is still capable, as he was apart of the DreamHack Valencia winning roster.

As for BC, he will reunite with former EG teammate, Jordan “BKN” Soojian as they both lead the roster as team coaches. BC will also take on General Manager duties for the roster as part of his new contract.

Cryn joins us just before the OGA Pit Season 3 Finals in Croatia!

Be sure to cheer for our new roster as we fight to secure our spot at the #SixInvitiational!

G2 esports has officially announced the departure of Daniel “Goga” Mazorra Romero. Goga has been a member of this core line-up for three years. He has been with the PENTA/G2 line-up every step of the way. The news comes to a shock to most, including Goga himself, however, the two-time Invitational winner will find no issues joining another organization has a proven support player.

This was particularly difficult for me on a personal level as it was, most certainly, for Nyx. I developed an important personal relationship with him during his time with DarkZero and I genuinely wish my friend all the best.

Zachary “Nyx” Thomas has departed DarkZero. Nyx is one of the original members of the team, as he has been a part of the core since the SK gaming days in 2018. Nyx’s department from the team is once again a sign of NA’s shakeup to evolve in 2020.

Sadly today, we announce @KidSkys will be leaving the #RECPack. As an original member of our @R6esports lineup, he will be dearly missed.

We wish him luck on his next team, and look forward to meeting again.

Following on from Robn’s departure, Alexander “Skys” Magor has also left the team. Two of their oldest members of the squad as now departed, which shows Rec’s desire to really evolve from their early days.

Thomas “Robn” Linden has left Team Reciprocity after a 20-month tenure. Robn has contributed to the team in a variety of departments, including the coach and analyst position.

Friday Twitlonger Regarding Leaving SSG and my Future in esports

Jacob “Daeda” Hale leaves Spacestation gaming citing personal reasons. Daeda worked as an analyst for the SSG squad for roughly 10 months. SSG will continue to use Lycan as a coach and sovsov3 as an assistant coach, as they head to OGA PIT LAN in December.

Giants Gaming has benched Léo “Alphama” Robine from the active lineup. The Giants roster had a poor showing at the Season 10 Japanese Pro League, after becoming the first European team to lose to an APAC team at a LAN final.

In our search for the final player to round out our Rainbow Six roster we knew we wanted an experienced pro league veteran that would bring fresh ideas to the team.

Chaos have been actively looking to find their fifth member of the roster since the regular season of the Pro League. With GiFu’s relegation, Ville “SHA77E” Palola will be joining the team. Sha77e is a former world champion under the PENTA Six invitational roster in 2018, and his presence will surely be a boost to the Chaos roster as the team moves into esports full time for 2020.