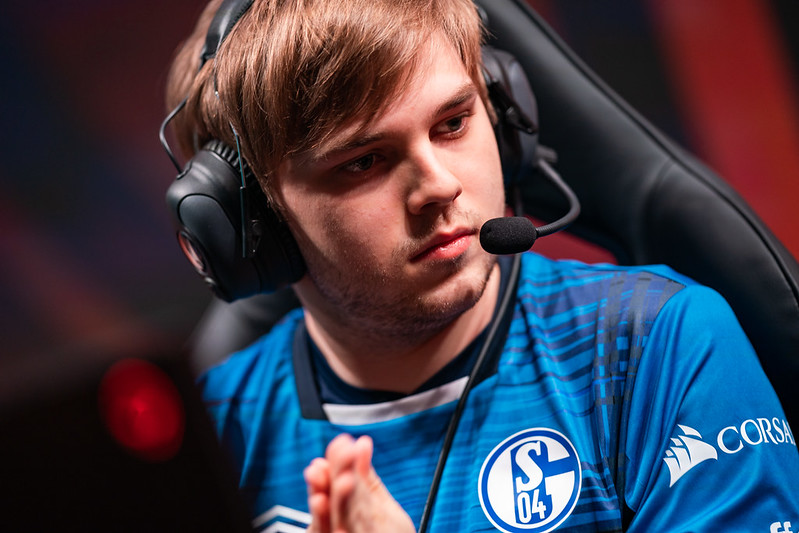 The League of Legends European Championship (LEC) has concluded the sixth week of the 2020 Summer Split. FC Schalke 04 showed signs of life in big upset wins over G2 Esports and Misfits Gaming. Meanwhile, a Baron steal against Rogue may be the turning point in G2’s season. We take a look at where things stand in the LEC by looking at the top story lines so far in Europe.

The 2020 Spring Split was not a good one for FC Schalke 04. After a playoff run to end 2019, S04 lost their bot lane duo in the off-season. Elias “Upset” Lipp left to join rival Origen, while Lee “IgNar” Dong-geun left the region to join FlyQuest in North America. S04 turned to Konstantinos-Napoleon “FORG1VEN” Tzortziou to fill the ADC vacancy, but that was a disaster. FORG1VEN quit on the team after an 0-6 start to the split. To their credit, S04 rebounded to 6-6 the rest of the way, but a 6-12 record was not what the proud organization expected.

The Summer Split has only been worse. S04 entered week six at 1-10, three games back from the ninth place Team Vitality. Though they’ve made changes at jungle and in bot lane, S04 has largely stuck with the same combination of players throughout the season. There’s a thin line there between being confident in your current roster and resignation to a lost season. After another disheartening defeat in week five, mid laner Felix “Abbedagge” Braun tweeted:

We are so disgustingly bad. Gg @SKGaming

It was safe to say there wasn’t a lot of confidence in FC Schalke 04 as they entered week six, especially considering their opponents. Neither G2 Esports nor Misfits Gaming have had the seasons they expected, but both were Spring playoff teams.

S04 did their best to make sure neither would make the playoffs this Summer, beating both G2 and Misfits to triple their win total on the season. Abbedagge clearly worked on his own play after his frustrated week five words, tearing apart G2 with his Azir. Abbedagge dwarfed the rest of the players in damage dealt, dealing 40.5k to a G2 team that could never touch him. Abbedagge went 12/2/11, Erberk “Gilius” Demir went 10/1/8 on Kha’Zix, and S04 absolutely crushed G2 32 kills to 9 in 36 minutes.

S04 clearly gained confidence from their win over G2, using it in their second match against Misfits. Gilius picked up his second consecutive First Blood, using it to snowball his Nocturne out of control. Gilius has had an up-and-down professional career, but there is no doubting he can get hot and play well in streaks. He out-jungled Iván “Razork” Martín in this one, going 8/2/4 and dealing damage comparable to the other carries in the game. S04 won 19 kills to 8, again needing 36 minutes to close out the game.

So, does this make FC Schalke 04 a late playoff contender? Probably not. At 3-10, S04 have five games left to pass four teams in the standings. There are three teams tied for the last two playoff spots at 6-7, meaning S04 would need to basically win out to even be in the conversation. Further, G2 Esports and Misfits Gaming now have a combined 11-15 record. While we might think they’re better than their records indicate, the fact remains that they are two teams in the bottom half of the standings right now.

Still, that doesn’t mean that these wins don’t matter. Every player on that team is playing for their career, as it’s hard to look great individually when the team is performing so poorly. Even if their futures aren’t with the organization — only Gilius of the starters is signed past the end of 2020 — players want to make a good impression and prove they still belong in the LEC.

S04 will look to keep their win streak and late playoff push going in week seven. They are scheduled to face Excel Esports and Origen.

The alarm bells were blaring for G2 Esports. After losing to FC Schalke 04 to open the week, G2 Esports were in a hole to Rogue. A loss to Rogue, while understandable given their 10-2 record, would drop G2 to 5-8 on the season and a game behind in the race for the final playoff spot. It’s an unthinkable position for the kings of Europe to be in, but G2 have not been themselves this Summer Split.

Rogue led almost the entire game. Finn “Finn” Wiestål’s Sion picked up First Blood, Rogue won six or so early skirmishes, and the gold lead was heavily in their favor. Rogue were up 3.4k gold at 12 minutes, 4.6k at 15, and peaked at 5.3k at 17 minutes. G2 did well to never let the lead get any larger, but it was clearly Rogue’s game to lose.

Rogue were up 13 kills to 5 and over 3k gold when they started Baron at 28 minutes. With Marcin “Jankos” Jankowski dead, Rogue had a few options to proceed when Baron got low. They could clear the ward to deny G2 vision, forcing G2 to try to steal the objective blind. Rogue could leave Baron as five and force a fight on the G2 members. Or, Rogue could send one or two members to zone off G2 as the rest of their team finished the objective. Rogue chose none of those options, instead leaving the ward up as they danced around the pit in vision of G2.

Mihael “Mikyx” Mehle’s Bard saw his opportunity and seized it. He cast his Tempered Fate perfectly on Kacper “Inspired” Słoma’s Sett, taking him out of the picture without touching Baron. Then, Rasmus “Caps” Winther’s Syndra perfectly timed his damage to burst down Baron and capture the objective for G2. It was undoubtedly a disastrous and avoidable sequence for Rogue, but it took perfect coordination and mechanics for G2 to pull off the steal.

G2 may have still been down in gold after the steal, but the momentum shift was undeniable. G2 won the two remaining team fights, giving them the ridiculous comeback win. G2 still trailed 14 kills to 18 when they finished Rogue’s Nexus at 38 minutes.

There are still lingering concerns for G2 Esports after week six. Luka “Perkz” Perković hasn’t looked right all split, understandably so. The team coordination, something that has been their foundation for so long, is lacking. Only Caps is playing at an individual level we are used to seeing.

However, we still know the old G2 are in there, lurking. We saw a glimpse of it, if only for a moment, in their comeback against Rogue. Could it be the turning point in G2’s season? They have matches against Team Vitality and Fnatic in week seven.

SK Gaming’s Summer Split has undeniably been an improvement. After a disappointing 4-14 Spring Split left them in ninth place, a few lineup swaps have helped them to be more competitive. Dirk “ZaZee” Mallner has been a great find in mid lane, while Janik “Jenax” Bartels has made a great transition to top lane.

After a 1-1 week six, SK Gaming are now 7-6 on the season, leaving them in a tie with Fnatic for third place in the LEC. SK Gaming have looked better in every facet, including pulling off a number of upsets throughout the season. However, their inconsistency has given their Summer Split more twists and turns than a rollercoaster.

SK Gaming started the season off hot, picking up wins over Origen, FC Schalke 04, and Misfits Gaming. SK Gaming then lost expected non-playoff teams in Team Vitality and Excel Esports in weeks two and three. Sandwiched in between was a victory over G2 Esports.

SK then lost to Fnatic, becoming the team that allowed Fnatic to snap their four-game losing streak. SK followed this up by getting revenge on Team Vitality in week five, setting up the opportunity to do the same to Excel Esports in week six.

SK Gaming did not get that revenge, falling to Excel for the second time on the season, an important distinction for tiebreaker purposes. However, SK Gaming followed that up by knocking off the first place, 10-2 MAD Lions. Juš “Crownshot” Marušič’s Ezreal went crazy, going 5/0/9 while dealing a game-high 24.7k damage in the win.

SK Gaming are the ultimate wild card as we head into the playoff stretch. They can beat or lose to anyone in any given week. Misfits Gaming and Rogue will try their luck in week seven. 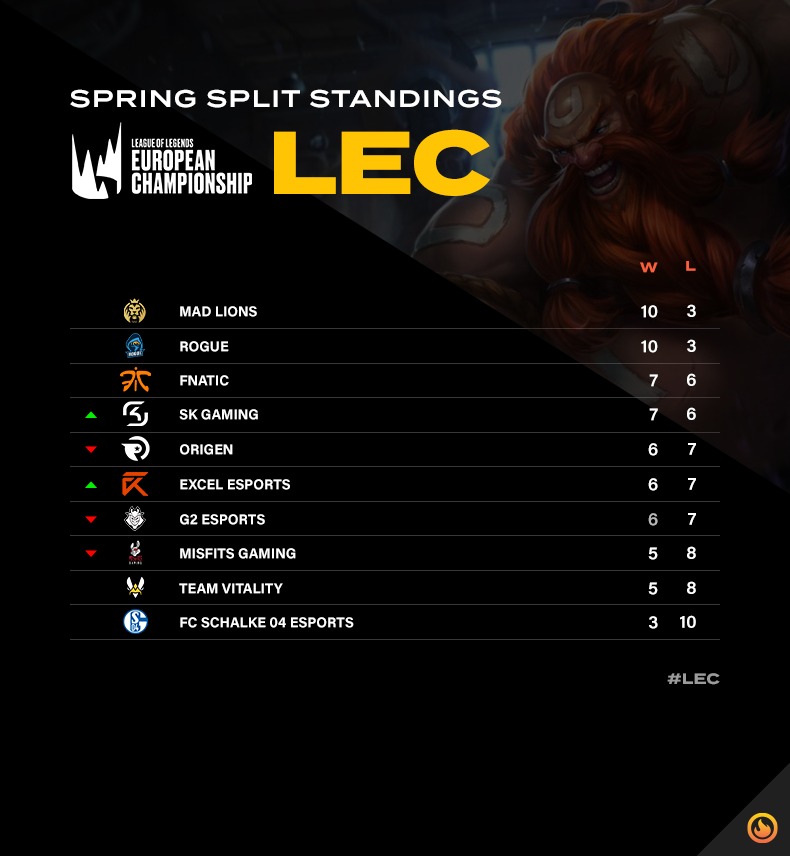 MAD Lions and Rogue continue to hold a three game lead over the rest of the league despite losses. Excel Esports, G2 Esports, and Origen are in a three-way tie for the final two playoff spots.

FC Schalke 04 picked up two wins, but they remain in the basement. Misfits Gaming have dropped a game out of the playoff picture after an 0-2 week. Origen’s honeymoon phase with Jakub “Jactroll” Skurzyński was short-lived, as Origen also went 0-2.

Origen were riding high after they went 2-0 in Jactroll’s debut with the team, but an 0-2 week six has them dangerously close to missing the playoffs. MAD Lions should be secure in qualifying, but they’re in a dogfight with Rogue for the number one seed. Coming off a loss to SK Gaming, they’ll come in motivated. Marek “Humanoid” Brázda had an off game against SK, but he’s been much better than Erlend “Nukeduck” Våtevik Holm so far this split. Can Upset and Jactroll reclaim their lane kingdom against one of the LEC’s best in Matyáš “Carzzy” Orság and Norman “Kaiser” Kaiser?

It’s not often the LEC’s match of the week is between a 7-6 and 6-7 team. But it’s also not often that Fnatic and G2 Esports find themselves with such poor records this far into the season. Both teams lost their first game in week six before winning game two, but Fnatic looked much better in their loss to MAD Lions than G2 did in theirs to FC Schalke 04. They look closer to recapturing their old form, but we also know that G2 Esports have shown the higher ceiling. With the playoffs looming, this regular season matchup has a lot more on the line than usual.