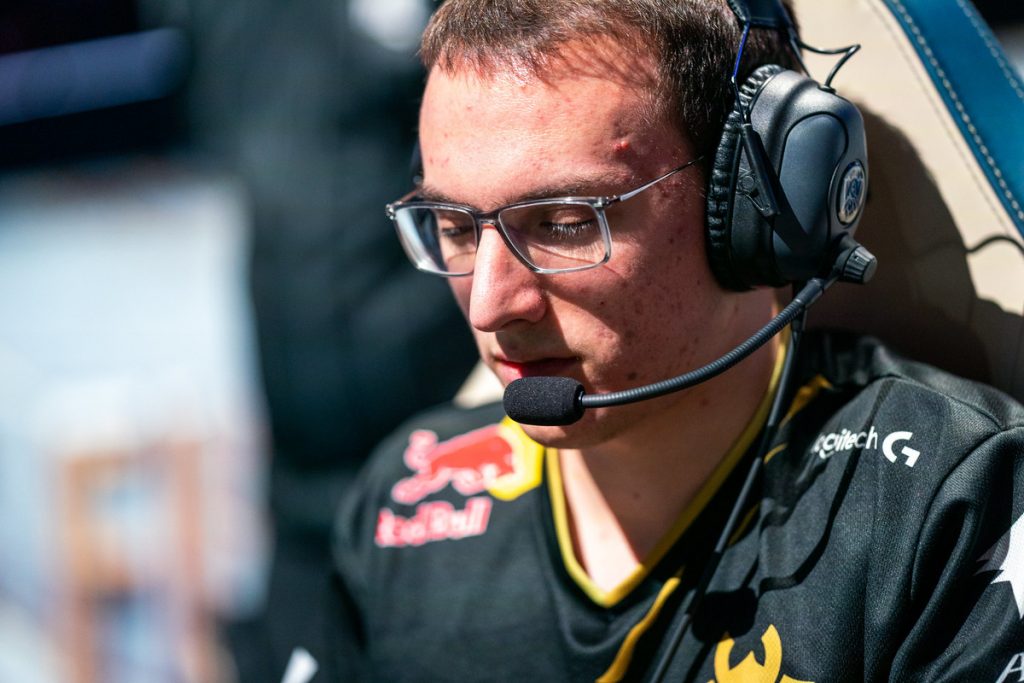 Perkz was back in the starting lineup, but G2 Esports are still stuck in a funk. (Photo courtesy Michal Konkol - Riot Games)

The League of Legends European Championship (LEC) has concluded the fifth week of the 2020 Summer Split. G2 Esports dropped two more games and are now off to their worst start in LEC history. Meanwhile, a change at support was just what Origen needed to start their second half of the season. We take a look at where things stand in the LEC by looking at the top story lines so far in Europe.

G2 Esports got off to a slow 5-4 start in the first half of the regular season, but they’ve earned the benefit of the doubt. During their run of three consecutive LEC titles, G2 have always finished the regular season in first place, but it wasn’t like they didn’t drop games along the way. The 2019 Spring roster dropped five regular season games, while the 2019 Summer and 2020 Spring dropped three each. This current version also lost a game in week four when they were without the services of ADC Luka “Perkz” Perković, so it’s tough to count that against them.

Fresh off a week break — and with Perkz back in the starting lineup — it seemed inevitable that G2 would string together a run of wins again. The LEC has continued to get better and deeper as a league, but this is still G2 Esports. No matter how strong the competition looks, they always end the season on top.

we're going through a bit of an entanglement at the moment pic.twitter.com/UN12uxmLIc

But this time, G2 Esports didn’t bounce back. Though they had a tough schedule against Origen and MAD Lions, G2 Esports lost both games to drop to 5-6 on the season, tied with Misfits Gaming in sixth place. This is the latest into a season G2 Esports have ever been below .500, dating back to when they joined the LEC, then called the EU LCS, in 2016 Spring.

Their week began with a loss to Origen. Perkz had the pleasure of side laning his Ashe into  Barney “Alphari” Morris’ Malphite, getting run down three times by him before the game was totally out of reach. Origen took the lead on an Alphari double kill top at 12 minutes and never looked back, winning 13 kills to 3 in 35 minutes. Andrei “Xerxe” Dragomir’s Jarvan IV (0/0/11) and Elias “Upset” Lipp’s Senna (5/0/7) both finished deathless.

G2 then faced MAD Lions, the new dominant team in Europe. G2 put up a good fight, including a three-for-one skirmish at 22 minutes to show signs of life, but MAD were too strong. Matyáš “Carzzy” Orság’s Kalista (2/0/12) and Norman “Kaiser” Kaiser’s Leona (1/0/11) went deathless as MAD won 16 kills to 7 in 30 minutes.

Both Origen and MAD Lions looked strong this week, so it isn’t like G2 Esports is losing to a team like FC Schalke 04, but we’re accustomed to G2 being the standard in Europe. Whether their meta read is off, the team atmosphere isn’t right, or the players simply aren’t playing up to their usual standard mechanically, the team is just “off” right now. They face FC Schalke 04 in their first game of week six before taking on 9-2 Rogue.

When Origen announced they would be replacing Mitchell “Destiny” Shaw with Jakub “Jactroll” Skurzyński, it was met by a lot of scrutiny online. The sentiment wasn’t so much that Destiny was irreplaceable, but that Jactroll wasn’t the answer. Jactroll and former bot lane partner Amadeu “Attila” Carvalho famously argued on Twitter over who the bigger problem was during their bot lane struggles. Jactroll’s contract was not renewed after Team Vitality went 2-16 in 2020 Spring and Jactroll was teamless to begin 2020 Summer.

However, Jactroll made a statement in his first week with Origen. Jactroll went 0/1/8 on Tahm Kench against G2 Esports in Origen’s upset win, helping Upset to his 5/0/7 Senna score. Upset appreciated playing with his new support, tweeting: “OG BOT LANE KINGDOM ITS A NEW ERA” after the game.

Jactroll and Origen then picked up another big win over Misfits Gaming. Jactroll went 1/2/11 on Thresh, again setting Upset up for a deathless performance, this time on Aphelios. Origen led from start to finish, winning 17 kills to 5 in 40 minutes. Jactroll picked up his first game MVP in only his second game with his new team. This led to another tweet of appreciation from his new ADC

Even if Upset is just supporting his new support, there’s no way we see anyone but Jactroll starting in support for Origen in week six. Not only did bot’s laning phase look improved, the overall macro play from Origen looked better than it had throughout the season. That’s apparently no accident, as Jactroll has immediately become the main shot caller on Origen.

As Jactroll told our Tom Matthiesen: “Upset was joking that I’m teaching them macro ever since I joined, which in a way is true, but everyone on the team is vocal. It’s easy to make a plan. Yes, I’m the main shotcaller, and I do make the most calls.” Jactroll was also able to identify weaknesses in Origen’s game and help to correct them, specifically in the mid game. There is no stronger impact a player can have than to simultaneously upgrade the laning phase and help the team with their macro play.

With the wins, Origen moved back over .500 and into a three-way tie for third with Fnatic and SK Gaming. Jactroll will get a chance to face his former team in Team Vitality to kick off week six. Origen will then face Fnatic to close the week.

FNATIC PICK UP PAIR OF WINS

Like G2 Esports and Origen, the first half of the season did not go as planned for Fnatic. Fnatic were 4-5 at the halfway point and were actually probably worse than their record indicated. Even in their wins, Fnatic looked more like a team that benefitted from enemy mistakes, more so than a team that earned a win themselves. Much of those struggles came from uncharacteristically poor performances from solo laners Gabriël “Bwipo” Rau and Tim “Nemesis” Lipovšek.

Unlike Origen, Fnatic did not make any changes coming out of the break. The roster obviously has a good history of success together, so the five-man squad were given the benefit of the doubt to turn things around.

It may not have looked pretty, but Fnatic began their second half with a 2-0 week. Fnatic almost certainly should have lost to Misfits Gaming to open the week, but Misfits couldn’t close the deal. Up 8k gold and Cloud Soul, Misfits engaged on Fnatic in a fight over the Elder Drake. Fnatic kited out Misfits, giving Nemesis’ Orianna time and space to pick up a quadra kill. Fnatic used the fight win to take Elder, Baron, and Misfits’ base. Fnatic and Misfits were even on kills at 10 apiece when Fnatic took down the Nexus at 37 minutes.

Fnatic then played a very sloppy back-and-forth game against 4-7 Team Vitality. Neither team ever took a large gold lead as kills were traded repeatedly throughout, totaling 42 in only 33 minutes of play. Oskar “Selfmade” Boderek’s Kha’Zix was given player of the game for his 7/2/9 performance, but Nemesis’ Azir went 6/2/7 and dealt a game-high 22.6k damage in support. Bwipo also went 6/3/12 on Ornn.

While Fnatic’s wins weren’t dominant, it’s important to note how much better their solo laners looked. Bwipo may have had a rough laning phase against Danny “Dan Dan” Le Comte’s Aatrox, but he was pivotal in the game-winning Elder team fight. He followed that up with a solid Ornn game against Team Vitality. Meanwhile, Nemesis was possibly Fnatic’s both players in both games this weekend. The break seems to have done him a world of good, as he returned to the solid control mage player that we remember. 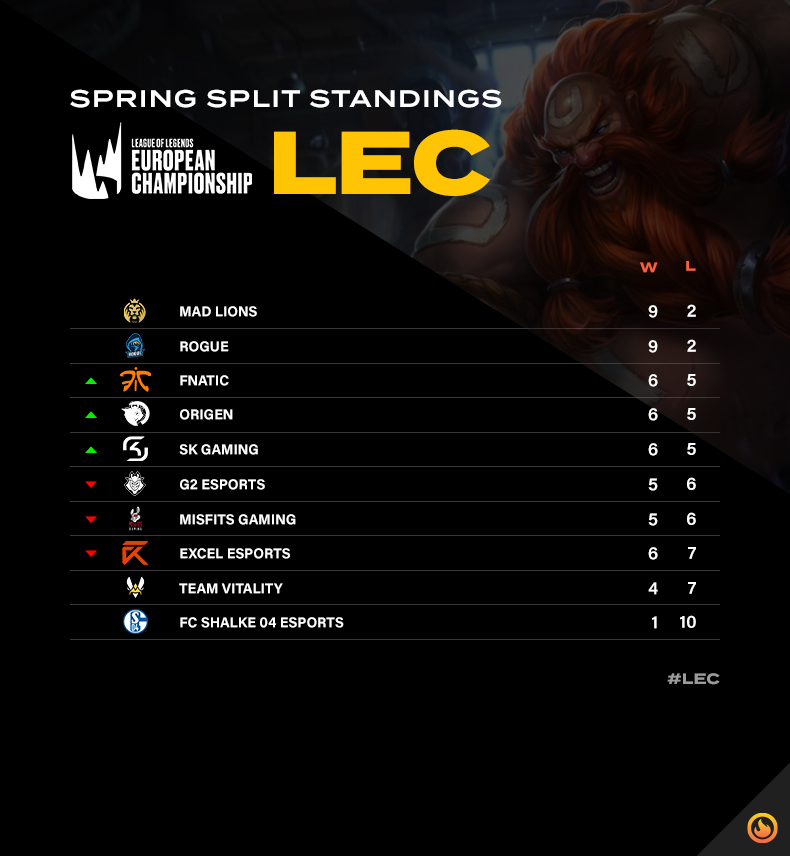 MAD Lions and Rogue both went 2-0 to keep pace at the top of the standings. Fnatic, Origen, and SK Gaming also all went 2-0 to move into a three-way tie for third place.

With the top five teams all going 2-0, all the bottom five teams went 0-2 on the week. That shockingly includes G2 Esports, who are off to their worst start in LEC history. FC Schalke 04 continues to sit three games behind ninth place.

Both teams are coming off 2-0 weeks, though MAD Lions looked much more convincing in their big win over G2 Esports. MAD have been the more consistent team throughout the season, evidenced by their three-game lead over Fnatic, but we know that Fnatic have the potential to match up well. The clash between Martin “Rekkles” Larsson and MAD’s young bot lane will be fun to watch, but it will be more important for Fnatic to see that Bwipo and Nemesis continue to play well.

We keep waiting for G2 Esports to snap out of it and take over the league again, but it hasn’t happened yet. Could they be in the midst of their own Team Liquid 2020 Spring Split disaster? Their game against FC Schalke 04 likely won’t provide many answers, but we can learn more from how they play Rogue. Rogue opened the second half of their season with light matchups against S04 and Excel, but they are still 9-2 on the season and tied with MAD Lions in first place. G2 will need to find their macro game again to match up against the methodical Rogue.