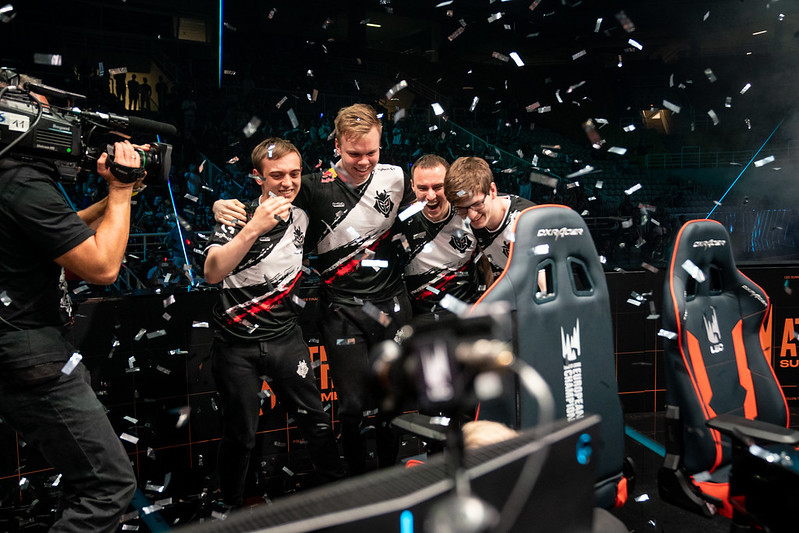 The two most storied teams and fiercest rivals in Europe, G2 Esports and Fnatic, met for a final time in the 2020 League of Legends European Championship (LEC) Spring Split finals. G2 Esports were the regular season winners, but Fnatic were the ones to make it unscathed through the Winner’s bracket of the playoffs.

G2 Esports showed they are the best team in Europe in dominant fashion, sweeping Fnatic 3-0 to take home their third consecutive domestic title. G2 Esports will represent Europe at the 2020 Mid-Season Invitational. Meanwhile, Fnatic will be left to contemplate what went wrong after they were a dominant 6-1 in their two previous matches.

Fnatic started the series on blue side and selected Aphelios for Martin “Rekkles” Larsson with their first pick. With Syndra banned away, Luka “Perkz” Perković showed high priority for Azir by first picking it red side for G2 Esports. Tim “Nemesis” Lipovšek’s pocket pick Veigar then came in as both a good pick for laning into Azir and a good blocker to Jarvan IV’s engage. Gabriël “Bwipo” Rau also got to counter pick Martin “Wunder” Hansen’s Ornn with Sylas. G2 rolled back the clock with a Kog/Lulu lane for Rasmus “Caps” Winther and Mihael “Mikyx” Mehle.

A bot lane skirmish at eight minutes put G2 ahead in game one. After teleporting to disengage a dragon fight, Wunder hung around bot lane to try to find a pick onto Fnatic. Nemesis channeled his teleport as soon as Wunder showed, leading to Fnatic attempting a five-man dive bot. Marcin “Jankos” Jankowski was close enough that G2 were able to disengage between their turrets and wait for Perkz. As Perkz arrived, Fnatic were in full retreat. Caps’ Kog’Maw picked up an early double kill.

As Fnatic started to lose control of the game, they attempted a fight mid lane at 21 minutes. Bwipo teleported behind G2, but Perkz had an Azir turret up to offer G2 protection. Bwipo used Jarvan IV’s Cataclysm to get into G2, but without tank stats, he died instantly. G2 used that kill to set up and deny vision around Baron, leading them to take the buff minutes later as Fnatic couldn’t see it happening.

Now down 3k gold and with Mountain Soul looming, Fnatic tried one more right at 26 minutes. Zdravets “Hylissang” Iliev Galabov’s Tahm Kench used Abyssal Voyage to flank G2, but G2 were too strong. Caps shredded Hylissang through exhaust and Perkz corralled the rest of Fnatic with his Emperor’s Divide. G2 picked up a clean four for zero fight and used that advantage to end the game. They took the opener 16 kills to 6 in 26 minutes.

The game two draft was similar in many ways to game one. Both teams drafted from the same sides and put forth the same bans. Fnatic opened with Aphelios, while G2 countered Azir and Jarvan IV. This time, however, Fnatic grabbed Ornn for Bwipo, saving Nemesis’ pick for later. Nemesis grabbed Kassadin into Azir this time, while G2 Esports continued to take Kog’Maw and Lulu with their final two picks.

G2 put on a clinic in game two, leading from start to finish. It began with First Blood to Jankos’ Jarvan IV bot. Hylissang’s Tahm Kench wanted to punish Mikyx for picking a poke support, so he tried to chase him down in lane. But Jankos was lurking for G2 and used Fnatic’s aggression against them. G2 then used all five members to dive Bwipo’s Ornn to ensure Fnatic could not counter.

You don't forget about the Emperor.

A three for zero fight bot at 12 minutes put G2 up over 2k gold. Though both teams scale well throughout the game, G2’s carries would have more agency in fights because of their support pick. Not only does Lulu offer health and shields, she can peel Kassadin for Azir and Kog’Maw. Nothing Tahm Kench would do could allow Rekkles’ Aphelios to walk up into Azir’s Sand Soldiers.

Fnatic tried to stop G2’s Baron rush at 21 minutes, but G2 had already finished it. G2 took the resulting fight four kills to zero to spell the end. G2 took one reset to buy their final items and made their push to end the game. Caps picked up another double kill to finish 7/0/8 and G2 won game two 16 kills to 2 in only 24 minutes.

Fnatic decided to change things up in game three, taking Azir with their first pick to leave Aphelios for Caps. Perkz quickly locked in his Corki to match, allowing the rest of his team to get more information. With Senna and Kalista still banned, Rekkles was pushed down the tier list onto Miss Fortune. Hylissang matched with another tank support in Braum. Mikyx once again countered with a poke/enchanter support, this time choosing Janna. She would be crucial in preventing Bwipo’s Zac from making an impact in fights.

Game three didn’t start off any better for Fnatic. Wunder’s Ornn somehow solo killed Bwipo, through his Cell Division passive, at level 2 to put G2 ahead early. Bwipo came back to lane a level behind, traded with Wunder, and died 1v1 again a minute later.

Fnatic were on their way to losing a bot lane trade again, but Nemesis teleported down to save it for them at six minutes. His flank netted Fnatic three kills, including a double for himself, to keep Fnatic from getting too far behind.

With Nemesis so far ahead mid, Fnatic had the dragon control to take the first three of the game, setting up the possibility of Infernal Soul at 25 minutes. But instead of fighting G2 for it, Fnatic let Caps start it solo while FNC went to start Baron. Infernal Soul was undoubtedly stronger than Baron, so that was a clear signal that FNC could not fight G2 heads up any longer. They were right.

Just give us everything 😈

Even with Caps arriving late, G2 stopped Fnatic from taking Baron and picked up a pair of kills in the process. Another team fight mid lane ended with Nemesis questionably re-engaging 1v4 to his own death. G2 used that extra kill to take Baron at 28 minutes. A Wunder teleport behind FNC led to three more kills for G2, essentially locking up the game.

This final felt very special for me, as I was playing a new role and got to see a very different view on how League works.
I was in a bunch of uncomfortable situations, but with the help of my team and especially @G2Perkz we ended up with another title 😊

The final push came at 32 minutes. Perkz’ Corki picked up a double kill, Caps went legendary, and G2 won another LEC championship 21 kills to 10 in 33 minutes. Caps finished 11/3/6, proving in this series he can play ADC at the highest level.

Mikyx was named series MVP for his performance on Lulu and Janna. He finished a combined 0/5/47 in the three games, but his peel allowed Perkz and Caps to shine.

The LEC Summer Split is scheduled to begin on Friday, May 22nd.