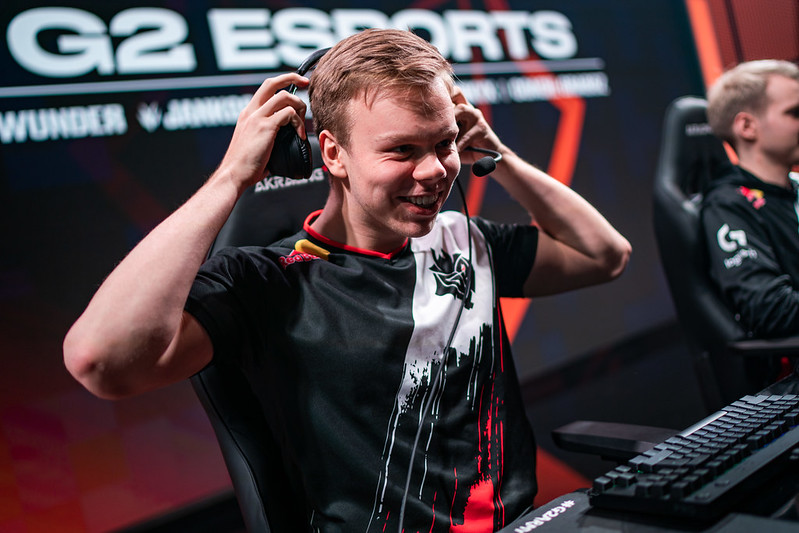 The LEC has concluded their ninth and final week of the 2020 Spring Split. The playoff picture is set, as G2 Esports secured the first seed heading into the playoffs. Meanwhile, Origen lost to MAD Lions to give Fnatic the second seed. We take a look at where things stand in the LEC by looking at the top story lines so far in Europe.

G2 Esports secured the first seed in the playoffs with a commanding win over FC Schalke 04 to open the week. Even though the final kill score of 25 to 18 might not seem like a dominant performance, G2 won the laning phase so handily that the kills they conceded mid game hardly mattered.

We take the win from Schalke and seal first place – GGs, @S04Esports 👋 pic.twitter.com/AyW1kh1VdH

The stomp started with Martin “Wunder” Nordahl Hansen’s Kalista. Wunder became the first player in the LEC to play Kalista top, which was first seen by Invictus Gaming’s Kang “TheShy” Seung-lok against Vici Gaming in the LPL. The addition to Wunder’s champion pool is good news for G2’s draft phase heading into playoffs.

Marcin “Jankos” Jankowski came top to hand Wunder First Blood at six minutes, but that was just adding insult to injury. Wunder had already developed a 54 to 20 CS lead and forced out Andrei “Odoamne” Pascu’s teleport. Now with him losing another two waves — on a Jayce pick that doesn’t scale particularly well — doomed Odoamne’s game before it really got started. Wunder eclipsed a 50 CS lead by 9 minutes before Odoamne stabilized it at around that mark.

In addition to that CS lead, G2 were also shoving S04 in every lane. They managed to take 14 of 15 turret plates in 14 minutes, finishing off the final outer turret at 16 minutes. Even when kills were even at 7 apiece at 16 minutes, G2 held a 3.5k gold lead.

S04 had a number of impressive plays in skirmishes, highlighted by Erberk “Gilius” Demir in his return to the starting lineup, but that had more to do with G2 pushing their limits than S04 clawing their way back into the game. G2 decided they had enough at 36 minutes and ended the game after a near ace in S04’s base.

G2 had nothing to play for in their last game of the year against Misfits Gaming, but won anyway. Wunder played Bard top, Jankos played AP Shyvana jungle, and Mihael “Mikyx” Mehle played Swain in the win. With MAD Lions already locking up the fourth seed, Misfits also had nothing to play for. Danny “Dan Dan” Le Comte locked in Teemo, while Ju “Bvoy” Yeong-hoon and Petr “denyk” Haramach played a Quinn/Annie bot lane.

G2 won 37 kills to nine in only 25 minutes. While it was obviously a troll game, it still highlights how good G2 are individually. Misfits are the LEC’s fifth seed, but no team is better at playing off script than G2. They’ll head into the playoffs as the easy favorite for another season.

Origen had a chance to put pressure on Fnatic to win their final game of the regular season, but instead lost to MAD Lions to end their chance at the second seed. Fortunately for OG, the LEC playoff format comprises a four team winners’ bracket and two team losers’ bracket, so they did not lose a bye with the loss. However, they exposed themselves to the chance that G2 would pick them as their first opponent in the winners’ bracket.

A four-man bot dive gone wrong for MAD Lions gave Origen the early lead. Marek “Humanoid” Brázda and Zhiqiang “Shad0w” Zhao collapsed to kill Elias “Upset” Lipp, but Erlend “Nukeduck” Våtevik Holm and Barney “Alphari” Morris committed double teleports to turn the play around. They each picked up a kill for their troubles, and OG took an early two kills to one lead.

That said, the damage was done to OG’s bot lane. Upset used both of his summoners and missed multiple waves, setting him far behind early. KNorman “Kaiser” Kaiser’s Sett caught him pushed up in lane just a minute later, CC’d him, and Matyáš “Carzzy” Orság’s Syndra picked up the easy kill. Another 2v2 kill in bot lane came two minutes later and MAD cracked open the bot lane turret in under 12 minutes.

MAD used their early bot lead to snowball dragons, picking up the first three of the game. By being on Soul point, MAD held the cards in regards to subsequent dragon fights. If they felt stronger, OG were forced to engage them. If they weren’t certain it would be a good fight, they could always concede a Cloud Drake or two to OG and regroup later.

MAD were forced to give up the fourth dragon after an overreach in the OG jungle, but they were there to fight for the fifth at 28 minutes. OG used all their CC on Andrei “Orome” Popa’s Ornn without killing him, setting up for a MAD counter engage. Kaiser led the charge with Sett’s The Showstopper, while Carzzy cleaned up. MAD secured the Cloud Soul and took total control of the game.

One more team fight win around Baron was enough for MAD to push for the win. The final score was 20 kills to 6 in 35 minutes, but the real story was in bot lane. Carzzy — the presumptive Rookie of the Split — finished 10/1/4, while Kaiser finished 2/2/16. Meanwhile, Upset and Mitchell “Destiny” Shaw combined to go 0/11/7. It was only one game, but it’s a reminder that bot lane is their vulnerability heading into the playoffs.

While the loss knocked OG down to third, it secured fourth place for MAD Lions. They now enter the playoffs in the winners’ bracket, guaranteeing they will play at least two playoff matches. That is an incredible debut season for the organization. MAD gutted their roster in the off-season, bringing in four rookies to play alongside Humanoid in his second season. That move has paid off tremendously so far, and MAD will continue to reap the rewards. Every member remains under contract through 2021, while Humanoid and Orome are signed through 2022.

Rogue have made playoffs for the second consecutive split, but they had a very disappointing end to the season. Expectations were high to start the year, especially with the addition of Steven “Hans sama” Liv in the off-season, but Rogue never took the next step to become an elite LEC team. Rogue finished the season a combined 0-6 against the top three teams: G2 Esports, Fnatic, and Origen. But that was more forgivable than their final week of the regular season.

Rogue had a shot at entering the top four and the winners’ bracket in the playoffs heading into week nine. The schedule was set up favorably. Two of the worst teams in the league, SK Gaming and FC Schalke 04, entered their games against Rogue at 2-14 and 5-12. Both, with nothing but pride to play for, pulled off the upsets.

In the match against SK, Toni “Sacre” Sabalić’s Gangplank had a good time into Finn “Finn” Wiestål’s Maokai. With the free lane, Sacre farmed up while Kim “Trick” Gang-yun influenced bot. Playing to their best player, Juš “Crownshot” Marušič got ahead on Varus as well to exploit Rogue’s weakest lane. With Gangplank and a fed on-hit Varus, SK were able to win team fights against Rogue’s team fight oriented composition. They took the game 17 kills to seven. Sacre finished 3/0/8, while Crownshot finished 4/1/8.

Against S04, Rogue moved Finn back to a carry champion in Irelia, but the results were even more disastrous. Odoamne, fresh off getting crushed by Wunder’s Kalista, destroyed Finn with the Jax counter pick. Odoamne finished 8/1/7, Finn finished 1/9/2, and that was the story of the game. S04 converted Odamne’s lead into an easy 21 kills to six win in only 27 minutes.

Rogue will have to overcome the lingering disappointment as they head to the playoffs. As the sixth seed, they’re only guaranteed one playoff match.

LOOKING AHEAD: LEC PLAYOFFS ROUND 1

G2 Esports picked MAD Lions as their round 1 opponent over Origen, despite MAD Lions’ convincing win over Origen in week nine. MAD will try to play to their bot lane strength with Carzzy and Kaiser, especially considering that Rasmus “Caps” Winther hasn’t been a huge carry in his new role. G2 have a huge experience advantage in tournament play and have proven they can mentally reset after poor games. It also helps that they have stars in every role.

In the end, the only difference between the second and third seed will be an extra side selection for Fnatic. The teams split their pair of regular season games and appear to be evenly matched heading into this showdown. The pace of the games should indicate who is setting the tone in the series. High tempo, high kill count games play more to Fnatic’s strengths, while Origen want to play the game at a slower pace. Look for Fnatic to follow MAD’s formula and attack OG’s bot lane early.

The two teams combined to finish the regular season 1-7 to fall out of contention for the fourth seed. Both are also solo lane focused, so you can expect to see the junglers hovering around the top half of the map. Misfits Gaming will center around Fabian “Febiven” Diepstraten and his big game experience, while Rogue need to find a way to get Finn going. Rogue won both regular season meetings, so they should have confidence in this matchup.