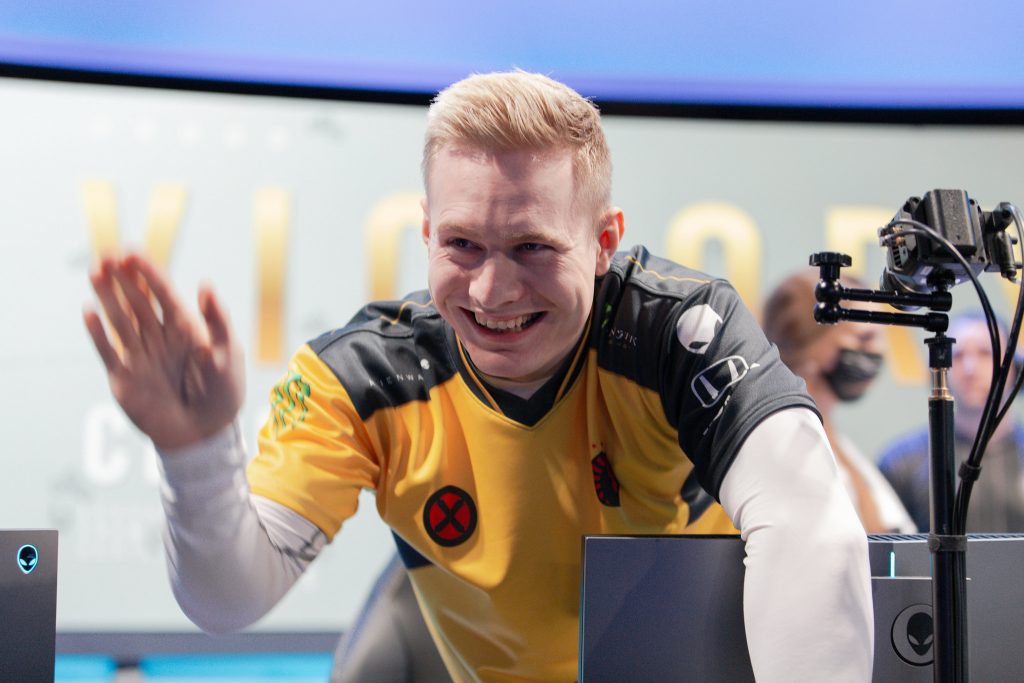 The seventh week of the League of Legends Championship (LCS) 2020 Summer Split has concluded. Team Liquid beat Cloud9 to keep pace at the top of the league in the game of the week. Meanwhile, TSM’s pair of wins made them the third LCS team to clinch their playoff spot. We take a look at where things stand in the LCS by looking at the top storylines so far in North America.

TEAM LIQUID BEST CLOUD9 TO REMAIN IN TIE FOR FIRST

The 2020 Spring Split was not competitive at the top of the league. There were Cloud9, winners of all but one of their regular season matches, and everyone else. C9 finished a ridiculous seven games ahead of the second place finishers — a three-way tie between Evil Geniuses, 100 Thieves, and FlyQuest. Team Liquid, coming off four consecutive LCS titles, missed the playoffs after a shocking 7-11 split.

While the league still feels top heavy in the Summer, Cloud9 are not running away with it like they did in the Spring. Entering week seven, Team Liquid were tied with Cloud9 atop the standings, while teams like TSM remained within striking distance. C9 had a chance to take a two game lead over Team Liquid after FlyQuest upset TL on Friday, but TL bounced back to give C9 their third loss in as many weeks.

The matchup was interesting from champ select. Instead of going to comfort picks after their recent losses, Cloud9 continued to push the envelope in terms of innovation in North America. They drafted a double “support” bot lane for Jesper “Zven” Svenningsen and Philippe “Vulcan” Laflamme in Sona and Lux. Instead of picking one to farm the lane while the other generates gold with Spellthief’s Edge, Cloud9 decided to split the farm and have each grab the support item. Their duo is supposed to be unkillable in lane, creating a huge mid game spike for Robert “Blaber” Huang’s Hecarim to snowball the game.

Unfortunately for C9, Team Liquid had the perfect counter. After showing the two champions in their second rotation of picks, TL grabbed Jo “CoreJJ” Yong-in Blitzcrank as their last pick before the second ban phase. Not only is Blitzcrank good at gank assist and creating picks on squishy targets, his ultimate Static Field’s active destroys enemy shields. So if CoreJJ waits for C9 to use their shields, he can eliminate their effectiveness in a large area with one spell.

Cloud9 built an early lead by taking advantage of their early skirmishing power, but TL never let it get out of hand. C9 also made a number of questionable itemization choices, including picking up Frozen Heart and Ninja Tabi’s into a predominantly magic damage focused team. Jung “Impact” Eon-yeong’s Mordekaiser pick was also an important tool to isolate Zven’s Sona in fights, eliminating the team-wide buffing that she is meant to do.

TL got to the point that C9 couldn’t kill both Nicolaj “Jensen” Jensen’s Syndra and Edward “Tactical” Ra’s Ezreal in the same fight due to a lack of damage. TL dominated the late game team fights, allowing them to turn the game around quickly and finish it off from there. TL crashed the C9 Nexus at 29 minutes, despite kills being tied at 14 apiece.

Though TL got some help from C9’s itemization issues, it was impressive to see them stand up to C9’s early lead. Most teams collapse when C9 gets a lead, but TL held strong. They also closed out the game very quickly after getting the lead, not making any mistakes to let C9 back into the game.

For C9, it was more evidence that they no longer stand head-and-shoulders above the rest of the league. They looked like the better side for most of the game, and the draft looked really good, but TL exposed a couple of counters in Blitzcrank and Mordekaiser. C9’s early skirmishing still looks good, but they haven’t been able to put teams away like they did with ease for most of 2020. Still, it can be seen as good news that C9 are finally being pushed by other NA teams ahead of international play.

So, most of the league will end up in the playoffs. We already knew that Team Liquid and Cloud9 had qualified after week six, but TSM became the third team after a 2-0 week seven. Playoffs are definitely an expectation for TSM, but it’s an improvement to see them become the third team to lock up a spot. They had to go all the way to the final weekend to clinch their spot in the Spring.

TSM opened their week with an easy victory over Dignitas. TSM picked on Omran “V1per” Shoura’s Jayce, sending multiple members to dive him top and set him behind early. TSM took the early gold lead and never looked back, requiring only nine kills before they destroyed Dignitas’ Nexus. Jungler Joshua “Dardoch” Hartnett’s Karthus was the only player to pick up any kills for Dignitas, going 3/3/0 against his former team. TSM conceded only one turret and needed only 25 minutes to pick up the win.

Things weren’t as easy against rival Counter Logic Gaming, but TSM got the job done against them as well. TSM picked up a pivotal Infernal Soul off a huge misplay by CLG top laner Kim “Ruin” Hyeong-min. Ruin’s Gnar was pushing top lane right before the objective spawned, clearly intending to teleport in. The only problem: Ruin expended his Gnar transformation while pushing top. When that expired, TSM rushed down the objective knowing that Ruin wouldn’t have access to Mega Gnar. TSM took the objective and then won the ensuing team fight, snowballing them to victory. Former CLG star Yiliang “Doublelift” Peng went 7/1/5 on Ezreal.

TSM didn’t look perfect this week, but with Cloud9 struggling, nobody does in North America. Pulling out wins against teams you’re supposed to beat is something that TSM has struggled with in the past two years, so it’s important to see that they are doing it as playoffs approach. The addition of Erik “Treatz” Wessén has made bot lane look more lane dominant, and while it may not have had the macro effects TSM were looking for yet, Treatz should be afforded time to find his voice on the main roster.

TSM have a difficult but important pair of games for playoff seeding in week eight. They open against Evil Geniuses before playing the struggling (by their lofty standards) Cloud9.

After heading into the Summer Split as the presumptive number two team in North America, FlyQuest struggled to live up to expectations. FlyQuest may have expected to take a leap with Colin “Solo” Earnest now playing full time as V1per departed, but another roster move may have shot them in the foot. Brandon “MasH” Phan replaced Jason “WildTurtle” Tran after week one, as FlyQuest thought MasH earned the opportunity over FlyQuest’s long-time ADC.

The early returns were fine, as MasH and FlyQuest won their first three games together. However, things started to fall apart. MasH got caught out at crucial times in losses, especially against 100 Thieves in week five. With losses in four of their next five games, FlyQuest turned back to WildTurtle in week six. FlyQuest picked up a nice win against TSM before falling to Cloud9. FlyQuest continued with WildTurtle in week seven and were rewarded with two more big wins as they attempt to clinch their playoff spot.

FlyQuest opened against the league-leading Team Liquid in game one. Solo’s Renekton was impactful, solo killing Impact to set the tone early on in the game. FlyQuest never trailed, conceding only one double kill to Tactical pre-10 minutes. FlyQuest picked up the final 10 kills of the game, going on to win 12 kills to 2 in 35 minutes. WildTurtle went 5/1/4 on Ashe against one of the best bot lanes in the LCS.

FlyQuest followed that up with another important win over Golden Guardians. After losing to GGS earlier in the season, FLY needed a win to avoid losing the head-to-head tiebreaker. Tristan “PowerOfEvil” Schrage was instrumental in this one, going 5/0/5 on Azir while dealing a team-high 26.6k damage to champions. FlyQuest won 13 kills to 11 in 40 minutes. 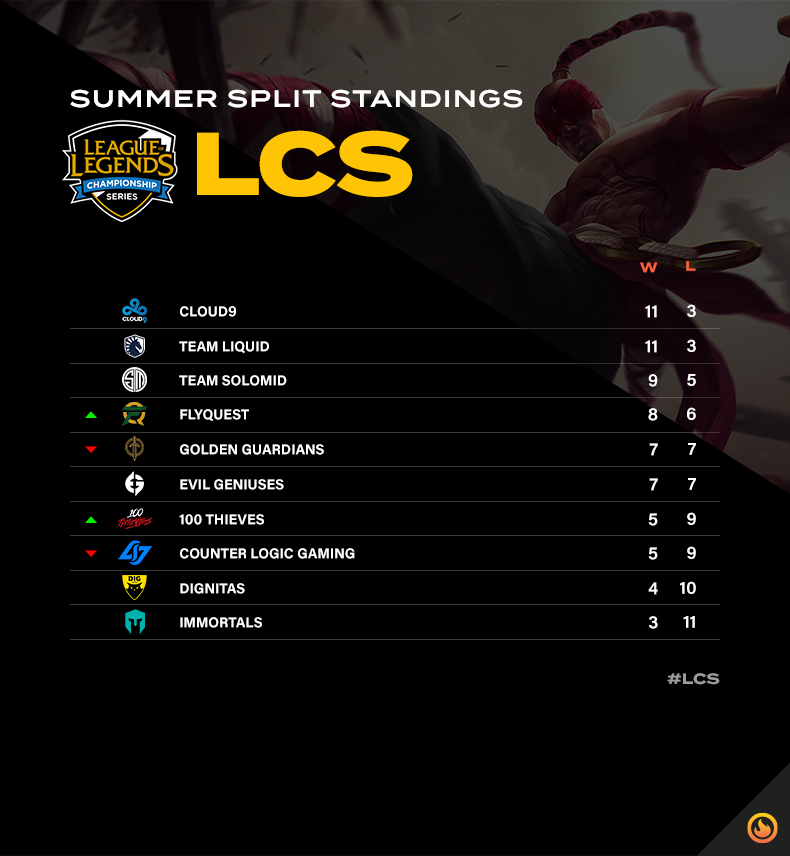 Team Liquid kept pace with Cloud9 by pulling off the upset of their co-leader after an earlier loss to FlyQuest. TSM joined them in the playoffs after a 2-0 week, while FlyQuest’s perfect week moved them into solo possession of fourth place.

Dignitas moved ahead of Immortals after a win over Evil Geniuses. 100 Thieves and Counter Logic Gaming remain in the final two playoff spots, while Golden Guardians and Evil Geniuses are close to clinching at 7-7.

FlyQuest can clinch their playoff spot with one win, though they’ll certainly be aiming for a higher seed to avoid starting in the loser’s bracket. 100 Thieves would just be happy with a playoff spot after their disastrous start to the season. 100T have looked more aggressive with Juan “Contractz” Arturo Garcia and Philippe “Poome” Lavoie-Giguere in the starting lineup, but FlyQuest have a big experience advantage in this matchup. We’ll see if Contractz can snowball Kim “Ssumday” Chan-ho, someone 100T have been playing around more and more.

TSM were thought to be the best chance to take down Cloud9 when they met at the end of the first round robin. TSM put up a fight before ultimately losing, but Cloud9 have looked vulnerable since that fight. Coming off three losses in three weeks, Cloud9’s struggles are coming at the perfect time for TSM to pull an upset. These teams are loaded with skill at every position, but Blaber against Mingyi “Spica” Lu is by far the biggest mismatch in the game. TSM will need Søren “Bjergsen” Bjerg and Treatz to help him withstand the pressure from NA’s best jungler.