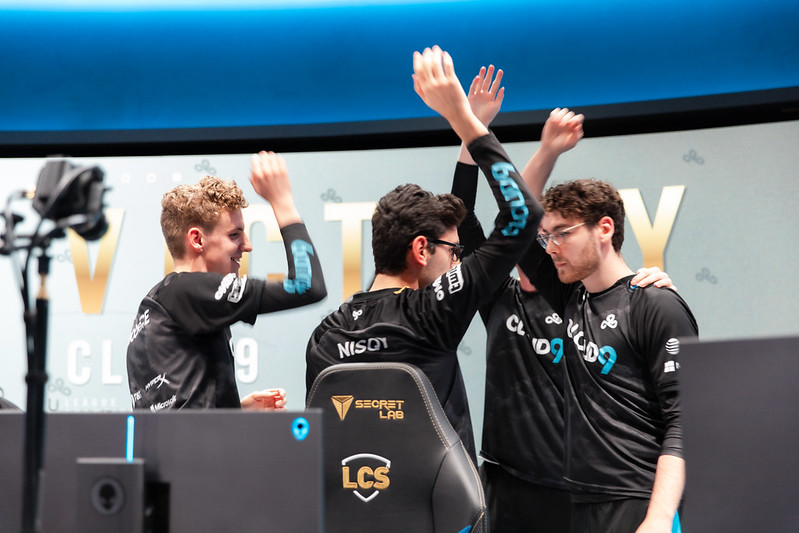 The fifth week of the League of Legends Championship (LCS) 2020 Spring Split has concluded. Cloud9 are more than halfway to a perfect season after two more victories took them to 10-0. On the other side, FlyQuest have quietly cemented themselves in second place. We take a look at where things stand in the LCS by looking at the top storylines so far in North America.

Another week in the LCS and another easy 2-0 for Cloud9. The latest victories move C9 to 10-0 on the season. This means they’ve played and beaten each team in the LCS in their first meeting. Immortals became the first team to lose twice to C9, but it’s looking like they’ll have a lot of company in the coming weeks.

Counter Logic Gaming and new mid laner Eugene “Pobelter” Park were the only team C9 had yet to beat heading into week five. As they’ve done all season long, C9 dominated the early game, picking up the first four kills and a 4k gold lead at 15 minutes. CLG actually picked up an ace on C9 at 20 minutes, but that was only after Eric “Licorice” Ritchie messed up an insane Robert “Blaber” Huang Insec kick on Trevor “Stixxay” Hayes’ Miss Fortune. C9 regrouped to take Cloud Soul, Baron, and aced CLG in the final team fight without issue.

C9 then brought out an innovative strategy in their second game of the week against IMT. Senna has been played as both ADC and support, but C9 became the first major region to play her with a support item while the support, in this case Philippe “Vulcan” Laflamme’s Tahm Kench, farmed the lane. That allowed Jesper “Zven” Svenningsen to prioritize harass for Souls and boosted his gold income.

Somehow, Vulcan was actually out-CSing Johnny “Altec” Ru’s Xayah in lane as a melee support. Zven farmed champions instead of minions, picking up First Blood on Altec at seven minutes and going 8/0/2 for perfect kill participation. C9 were dominant in another sub-30 minute win, leading 10 kills to four.

C9 still have not lost a single mid turret the entire season. Considering that mid outer turret is probably the most valuable in the game for control purposes, it speaks to how much control C9 have had through the middle of the map every single game this season. This is also considering Nisqy has played four melee champs in 10 games, though three of those were against other melee champs.

Second place FlyQuest will get the first shot at breaking that streak when the two teams meet to open week six.

We’ve talked about how great C9 are as a team, but all of their players are having great individual seasons as well. You could make the argument that every member of C9 deserves to be on the All-Pro First Team for the Spring Split.

People who watch all regions are pretty much in universal agreement that C9 is the best team in the world rn. Maybe it'll change when LPL starts but I doubt it. Zven and Licorice are the absolute best in their role.

Blaber has blown the rest of the junglers out of the water with his early games. He leads LCS junglers in XP difference at 10 minutes (376), CS difference at 10 minutes (5.0) and damage per minute (293). He also leads the junglers in team damage percentage (14.7%), which is even more impressive because it’s measuring his damage compared to the rest of his team. His 7.3 KDA almost doubles the next highest among junglers in the league (3.9).

The argument for the bot lane almost goes without saying. It took Zven forever to die for the first time, and his 39.7 KDA leads all LCS players. Right behind him is his support Vulcan with a 24.5 KDA. Zven’s “support” Senna game brought down his CS numbers, but he’s still leading ADCs in gold difference at 10 minutes by a healthy margin — 366 to Peter “Doublelift” Peng’s 163. There aren’t great support statistics to do Vulcan’s season justice, but Zven’s KDA speaks volumes of Vulcan’s ability to protect Zven.

C9 will have stiff competition in the solo lanes, as TSM’s Sergen “Broken Blade” Çelik and Søren “Bjergsen” Bjerg both have been better laners than Licorice and Nisqy. PowerOfEvil also is having an MVP-like season for FlyQuest and will benefit from the notion that he is playing with more average players around him than Nisqy. That said, there’s no way C9 would swap any member of their team out for any other player in the LCS. Considering they’re 10-0, it’d be tough to argue that the LCS has a better starting five than C9.

FlyQuest have generated a ton of new fans and goodwill with their TreeQuest initiative, but the League of Legends team is doing their part, too. With wins over Golden Guardians and Counter Logic Gaming, FlyQuest are now alone in second place in the LCS with a 7-3 record.

We didn’t get to see a PowerOfEvil Nashor’s Tooth in Fly’s game against GG, but it was a vintage performance on his most-famous champ. PoE Flame-Horizen’d Greyson “Goldenglue” Gilmer’s Zoe in his dominant 5/0/4 Orianna performance. PoE also dealt a game-high 14.1k damage to champions. His Co-MVP for the game was Lee “IgNar” Dong-geun, who had great Rakan engages to kick things off for FLY while maintaining a perfect scoreline of 1/0/9. FlyQuest won their opener against GG 12 kills to 4 in just under 30 minutes.

FlyQuest conceded the first two drakes of the game to CLG in their second game of the week, but that was all according to script. Ocean popped up as the third drake of the game, meaning it would continue to spawn until either team reached four total. FlyQuest took all four Ocean Drakes, not only giving them Ocean Soul, but guaranteeing the organization will plant an extra 40 trees as part of TreeQuest.

PowerOfEvil was once again the star for FlyQuest. He was a team fight monster, picking up a triple kill in a fight around Baron at 28 minutes before another double kill in the game ending team fight. PoE finished with an 8/2/6 score and again dealt the most damage in the game (32.4k), almost doubling Jason “WildTurtle” Tran’s second place 18.3k. FLY took the game 17 kills to 10 in 36 minutes, adding another 157 trees to the season total.

With another great week, PowerOfEvil is making a case for MVP of the Spring Split. His 608 damage per minute is highest in the LCS, including ADCs, as is his absurd 36.2% team damage percentage. The team’s other big carries, WildTurtle and Omran “V1per” Shoura, are last among their positions in damage per minute, not just team damage percentage. So PoE isn’t just outshining the rest of his team’s carries, he’s compensating for their lackluster seasons.

Yes, his damage numbers are influenced by playing AoE mages, but so are pretty much every other mid laner in the LCS. The current meta suits PowerOfEvil perfectly, and it’s easy to see what FlyQuest were envisioning when they brought him aboard in the off-season. He’ll have a chance at another statement game against C9 to open week six.

A meeting between the top two teams in the LCS. These are two of the better drafting teams in the league, having realized weeks earlier that Ornn needs to either be banned or picked immediately. Cloud9 enter as heavy favorites, but Lucas “Santorin” Tao Kilmer Larsen can punish Blaber if he overreaches early. With FlyQuest on blue side, expect them to try to either draft Sett with their first pick or wait until their final selection to make sure they can counter pick either Licorice or Nisqy.

Team Liquid and TSM are both teams that look better on paper than they have so far in the LCS. Nobody expected TL to be 4-6 and in a tie for sixth more than halfway through the season, but Mads “Broxah” Brock-Pedersen’s late arrival certainly hurt. TSM are the most dominant early game team outside of C9, but they still have only converted six wins with their talented roster. This game is loaded with start matchups. Watching Bjergsen face off against his fellow countryman Nicolaj “Jensen” Jensen is always a treat.