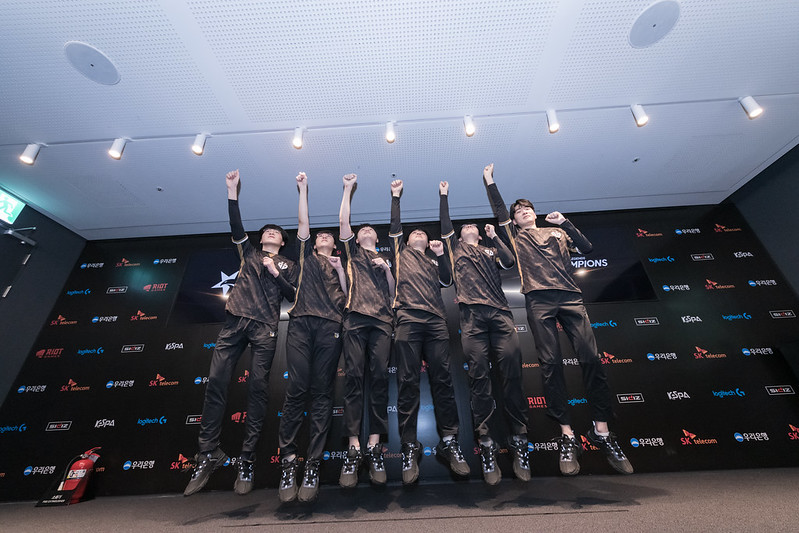 The League of Legends Champions Korea (LCK) completed their third week of the 2020 Spring Split. Gen.G and T1 both defeated DragonX to jump to 5-1 on the season, while APK Prince picked up their first match win as a member of the LCK. We take a look at where things stand in the LCK by looking at the top story lines so far in Korea.

GEN.G, T1 ATOP STANDINGS AFTER WINS OVER DRX

Things can change quickly when top teams get together. DragonX picked up their first two losses of the season to Gen.G and T1, leading both to leap over DRX in a virtual tie for first place atop the standings. Gen.G has the better game record at 11-4 to 11-5, but T1 hold the series tiebreaker with their 2-1 win to close week two.

Gen.G dropped their opening game to DRX in a one-sided 11 kills to 2 loss before bouncing back with a dominant win of their own. Gwak “Bdd” Bo-seong had an amazing 11/1/5 performance on Zoe, landing all kinds of poke on DRX’s incredibly squishy composition. Add in the engage of Jarvan IV, Rakan, and Rumble’s Equalizer, and DRX had no agency in the game when they fell behind. Gen.G closed game two out 19 kills to 3 in 31 minutes.

Game three was the most competitive of the series, but that was due in large part to DRX just slowly getting out-scaled. Despite playing against the early game terrors of Pantheon, Olaf, and Volibear support, Gen.G held a gold lead throughout the game. Most of that gold lead was thanks to a four-for-zero bot lane fight at three minutes. Kim “Life” Jeong-min’s Yuumi was crucial in sustaining Gen.G’s health. With that early win, Gen.G traded objective until they were strong enough to run away with team fights. They would go on to win 26 kills to eight in 33 minutes.

Our victory continues, and you know we can do better. Please look forward to our next match!#T1WIN #T1Fighting pic.twitter.com/PtCnowBJ2N

By contrast, T1 opened their series against DRX with a dominant game one win. Lee “Faker” Sang-hyeok played an unkillable Ornn mid, initiating T1’s fights while finishing 3/0/13. He was unkillable because he was coupled with Kim “Canna” Chang-dong’s Soraka. It was a very good red-side draft by T1 to be able to get both picks while still adding in one of the S-tier bot laners in Miss Fortune. T1 took game one 19 kills to six in 34 minutes.

DRX recognized that T1 would still give them Sett if they left Ornn open, so DRX did just that in game two. This time Canna played the Ornn into Choi “Doran” Hyeon-joon’s Sett, making his lane more difficult. DRX also had Hong “Pyosik” Chang-hyeon on his famous Kindred, giving DRX a comfort pick and another carry in the jungle. DRX would go on to win game two 15 kills to five in 32 minutes to force a game three.

DRX led in gold for the majority of game three, using Jeong “Chovy” Ji-hoon’s Ziggs to accrue an early turret lead. But if you can’t grow it past 3k, it just doesn’t matter in the late game when Ornn swings that gold advantage back around. Faker was able to pick up Ornn on red side again and made DRX pay. That allowed Canna to again pick a better matchup into Sett. This time he opted for Renekton, giving him lane presence and early impact with his TP. Canna made the pick worth it with a 4/0/6 score and T1 bowled over DRX in the final three team fights of the game to win 14 kills to 3 in 35 minutes.

APK Prince have been on an upward trend following their lackluster debut in the LCK. After losing 0-2 to SANDBOX Gaming and DAMWON Gaming in week one, APK took games off Afreeca Freecs and Griffin in week two 1-2 losses. The organization finally picked up their first match win in the LCK with a 2-0 defeat of KT Rolster to open week three.

While APK want to prove they belong in the LCK, they also aren’t afraid to shake things up in the draft. As it stands, they are the only team in the LCK to have picked Illaoi and have done so four times now, drawing three bans. Jeon “ikssu” Ik-soo played it against Kim “SoHwan” Jun-yeong’s Lucian in game one, to mixed results. Ikksu sacrificed lane pressure and died quickly in fights, but he actually dealt more damage to champions than Lucian. This was impressive considering all the free harass Lucian had in lane.

APK’s plan, or KT’s mistake, was to allow KT to engage into them and turn the fight around. Lee “HyBriD” Woo-jin’s Miss Fortune hit several five-man Bullet Times, as evidenced by his 42.8k damage to champions. Ikksu would throw himself in the middle of KT’s team while Kim “Keine” Joon-cheol’s Syndra would set up easy multi-man stuns. Even if you question KT’s execution, APK took advantage. APK won game one 14 kills to 10 in 40 minutes.

Game two was a little more straightforward for APK. They drafted a more traditional composition with hard engage from Ornn and Rakan to negate some of the poke that KT’s Zoe/Ashe composition wanted to put out. Though Keine conceded First Blood, APK never really trailed in the game and spiked hard as they were able to get their Ornn upgrades online. HyBriD’s Xayah finished 6/1/4 with a game high 31k damage dealt to lead APK to their 13 kills to six win.

Many assumed APK would finish last in Korea after they failed to re-sign Lee “KaKAO” Byung-kwon this off-season, but they have already shown they are at least better than the last version of the Jin Air Green Wings. Keine and HyBriD have shown great potential in their carry roles, while ikssu’s interesting champion pool has already drawn unconventional bans in champ select. APK will search for their second win against top teams DragonX and Gen.G in week four.

Last week, we wrote that LCK teams should just pick Ornn. He’s a strong champion that fits in any team composition, can be flexed across three roles, and adds insane gold value to his team via item upgrades. Through two weeks, Ornn had a 68.4% win rate but was only present in 76.5% of champ selects.

In week three? Ornn was banned or picked in every single game, jumping his presence to 84.4% of champ selects on the season. As teams continue to play against it, you would expect the win rate to decline. Winning more than two-thirds of his matches already seems unstable, but teams should also be getting more familiar with counter picks to take him down. Plus, you might see some stronger teams allow Ornn through to a weaker team because they think they can win anyway.

But not only did Ornn’s win rate not go down, it actually got even better after week three. Yes, Ornn went 9-3 in week three to bump his overall win rate in the LCK to a now whopping 71%. It’s not mattering which team is picking Ornn — whether it is a top team like T1, or a bottom team like APK Prince. The champion just continues to win.

The rest of the LCK seems to be figuring that out, too. Ornn went from just being a priority pick in the first half of the games in week three to being banned in 12 of the final 13 games of the week. The only team to leave him open in those final 13 games, DAMWON Gaming, were rewarded with a loss to SANDBOX Gaming. Here’s to guessing his 44.2% ban rate will continue trending up in week four.

Gen.G will look to stay atop the standings against one of the three other teams with a winning record. Afreeca Freecs are coming off a surprising 2-1 loss to KT Rolster to end week three, so they’ll come in with extra motivation. Star ADCs Park “Ruler” Jae-hyuk and Jin “Mystic” Seong-jun should put on a show in their first matchup since Mystic’s arrival from the LPL. Bdd against Song “Fly” Yong-jun should be a mismatch in Gen.G’s favor, so AF will rely on Kim “Kiin” Gi-in getting the best of Kim “Rascal” Kwang-hee.

Though they are 5-1 to start the season, T1 haven’t been as dominant in lane as they were in 2019. That sets up for a nice matchup for SANDBOX Gaming, who always play well as a team despite lacking star power to make them an elite team. Top laner Park “Summit” Woo-tae is their biggest carry, and he’ll get to go against T1’s weak point on the team in Canna. Faker and Park “Teddy” Jin-seong will need to control their lanes as expected for T1 to avoid an upset.