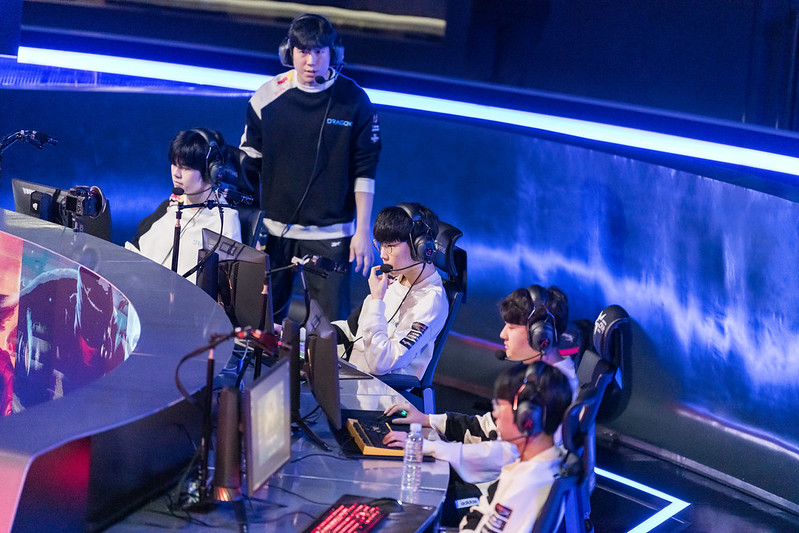 The League of Legends Champions Korea (LCK) completed their fourth week of the 2020 Spring Split. DragonX got the better of Griffin in their first matchup of the year, while Gen.G and T1 posted perfect games on back-to-back days. We take a look at where things stand in the LCK by looking at the top story lines so far in Korea.

DragonX and Griffin met for the first time in week four after Jeong “Chovy” Ji-hoon and Choi “Doran” Heyon-joon followed coach Kim “cvMax” Dae-ho from Griffin to DRX. CvMax’s exit was preceded by allegations from Choi “Sword” Sung-won that cvMax abused players as the Griffin head coach. While the investigation and legal battle is still ongoing, cvMax and DRX won the first battle on the rift.

We won the game by 2:0 today!
Thank you for your love🙏
Please support our members!#DRXWIN #GoDRX #DRXFighting

Chovy dominated his former team in game one. With Son “Ucal” Woo-hyeon taking Ornn mid, DRX swapped Doran’s Soraka mid and left Chovy’s Rumble to lane against Sword’s Viktor top. Despite the melee versus ranged matchup top, Chovy constantly pushed Sword out of lane by just being a superior laner. That’s despite taking heal to Sword’s teleport, meaning Chovy didn’t have near the margin for error that Sword had in taking trades.

Chovy used his priority top to roam mid and pick up First Blood on Ucal at 10 minutes. Chovy then walked straight up the river, and immediately solo killed Sword upon returning to lane. So not only did he sacrifice part of his lane to help his team while Sword stayed put, Chovy then instantly took back lane control by solo killing Sword.

Griffin managed to stay competitive by virtue of having Ucal on Ornn, but DRX’s Soraka and Aphelios scaling meant that they were never in serious danger of being outscaled. DRX were eventually rewarded for their early dragon stacking with Cloud Soul and used their extra stats to take consecutive Barons. The second Baron secure resulted in the final push, in which Kim “Deft” Hyuk-kyu picked up a quadrakill in GRF’s base to seal game one.

Sword got a lot of help from Jeong “Irove” Sang-hyeon’s Tahm Kench in game two, but it still wasn’t enough for Griffin to topple DRX. Deft’s Varus was the perfect counter to Park “Viper” Do-hyeon’s non-farming Senna ADC, using his range advantage to deny Viper the opportunity to farm souls for his passive. Even though the top half of the map was going fine for Griffin, Viper died four times in 20 minutes and finished the game 1/5/4. Deft more than doubled Viper’s damage, dealing 31.9k to Viper’s 14.1k.

It was obvious to see just how much Griffin miss Chovy in this series. He’s as dominant of a laner — top or mid — as there is in Korea, and his ability to flex picks like Sett and Rumble makes him incredibly valuable. Doran didn’t exactly outclass Sword with the Kennen into Aatrox counter in game two, but it’s clear that Sword remains a very weak spot for Griffin. Viper clearly misses Son “Lehends” Si-woo and Lee “Tarzan” Seung-yong is struggling to make an impact without Chovy and Lehends aiding him on the map.

On the other side, DRX have to be very happy with the early returns on their new roster. In addition to Chovy, Ryu “Keria” Min-seok has been one of the best supports in the LCK as a rookie. Hong “Pyosik” Chang-hyeon has had more volatile performances, but it’s still been more good than bad. They have definitely been rewarded for starting from scratch around Deft and putting their faith in several young talents this season.

Completing a perfect game in professional League of Legends is a rare feat. The criteria of not allowing a single kill, turret, or neutral objective requires such dominance that the opposing team cannot respond to a single play with a counter of their own. Amazingly, both Gen.G and T1 pulled off perfect games in back-to-back days against playoff contenders Afreeca Freecs and SANDBOX Gaming.

Gen.G picked up the first perfect game of the week in game three of their series against Afreeca Freecs. Gen.G used their early game priority from Gwak “Bdd” Bo-seong’s Pantheon to get the snowball going. Bdd and Kim “Clid” Tae-min’s Ekko combined to invade Lee “Spirit” Da-yoon’s Jarvan IV for First Blood. Bdd then used his ultimate bot lane to pick up a double kill on AF’s bot lane.

From there, Gen.G just started their dragon stacking and grouped to take turrets. AF got caught out right before Infernal Soul spawned, allowing Gen.G to get the buff and take bot inhibitor uncontested. A Baron and team fight ace later allowed Gen.G to close out the game up 13 kills to 0 in under 29 minutes.

If that didn’t sound action packed, T1’s win over SANDBOX Gaming was even more docile. T1 didn’t pick up First Blood until SB contested mountain drake at 19 minutes. T1 picked up the objective and four kills, including a double kill on Park “Teddy” Jin-seong’s Ezreal. SB then allowed T1 to take Mountain Soul and Baron without contest, pretty much admitting defeat. T1 killed Kim “OnFleek” Jang-gyeom’s Lee Sin on their final push while the rest of SB grouped under their fountain. T1 needed only a paltry five kills to complete their perfect game.

While the perfect games are a testament to how good Gen.G and T1 are, they also highlight the biggest concern with LCK as a region. Afreeca Freecs, and particularly SANDBOX Gaming, played so passively as Gen.G and T1 took objective after objective to close the games out. Instead of trying to make low percentage plays to climb back in the game, Korean teams have been all too willing to bleed out without ever trying anything.

It is a continuation of the controlled style that made Korea the dominant global region for years, but the past two years have proven that this style doesn’t work anymore. For Korea to make their way back to the top of international play, they need to rewire their thought processes to allow for more risk in their games. A surprise engagement from a team down 10k gold may only work 5% of the time, but that can be better than a non-engagement that works 0% of the time.

DAMWON Gaming are in playoff position after four weeks, but their 4-4 record is below expectations. They were considered one of the most talented teams at 2019 Worlds and returned all of their starters for 2020. Even if they didn’t take a leap in macro play, their already dominant mechanical players were expected to remain contenders, especially with T1 and Griffin weakened in the off-season.

DWG won the match against HLE with a valuable 2:1.
We will keep practice hard to show you our development.
Thank you to all the fans who supported Damwon Gaming!

We're not going on streaming YouTube today to prepare for the next match. Thank you.

Instead, DWG have reverted back to some of the problems that plagued them earlier in 2019. While there is a call for Korean teams to be more aggressive, DWG have been the one team on the opposite end of the spectrum. They have a tendency to tunnel vision on chasing kills, without respecting the prospect of a counter engage. There is a difference between making a play that doesn’t always work versus making a play where the reward doesn’t match the risk.

Kim “Canyon” Geon-bu has taken a big step backwards to open 2020, much like Tarzan. Jang “Nuguri” Ha-gwon and Heo “ShowMaker” Su are still crushing lane and creating pressure, but Canyon has been unable to capitalize. That was never more evident than in their game three loss to Afreeca Freecs. Nuguri and Showmaker combined to finish 7/0/9, but Canyon’s 1/5/3 Olaf gave too much of an advantage to AF.

DWG have also been unsettled in their bot lane. The team has swapped between Cho “BeryL” Geon-hee and Ryu “Hoit” Ho-seong five times so far this year. Neither has really formed a formidable tandem with Sin “Nuclear” Jeong-hyeon, but the team was never supposed to be built around bot lane.

When DWG similarly struggled with macro in 2019 LCK Spring, the team subbed in Lee “Flame” Ho-jong and Son “Punch” Min-hyuk for veteran experience and shot calling. Punch left for SANDBOX in the off-season, but Flame remains available — at least until he has to fulfill his military service. DWG hasn’t taken that step yet, especially as Nuguri has been one of their most productive players, but swapping between support players isn’t making any noticeable impact.

DAMWON Gaming and Hanwha Life Esports look to be two of the most likely competitors for the fifth and final LCK playoff spot, so this should be an important match. DWG won the meeting in week four, so they could take a commanding lead on HLE with another win and the tiebreaker. HLE won the only game they shut down Nuguri, so expect Kang “Haru” Min-seung to camp for top and HLE to try to get Lee “CuVee” Seong-jin a winning lane matchup.

Gen.G and DragonX are two of the top three teams in the LCK. Gen.G pulled out a close 2-1 series in week three, but the series could have gone either way. Both Chovy and Bdd are squarely in the Spring Split MVP conversation, so mid lane will be the one to watch. With top lane picks often going in the first rotation, look for both teams to save their counter pick for mid lane on red side.