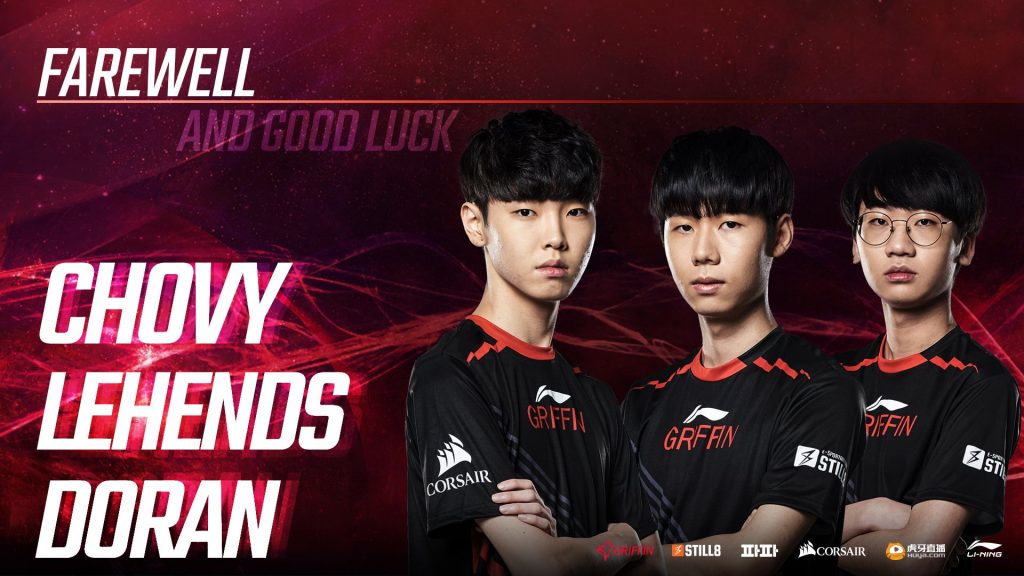 Chovy, Lehends and Doran are the first three players to leave Griffin with more likely to come (Photo via Griffin)

The Griffin drama keeps on rolling in, but it looks like the end is near. Still8, Griffin’s parent company, announced that all of the players have been released from their contracts. While they could re-sign under a new and improved contract, Still8 and Griffin would respect their rights to become free agents. Naturally, we have already seen the departure of half of the roster.

We are here to convey a piece of upsetting news. Our contract with Lehends, Doran and Chovy was ended after mutual consent. Sincerely thank you for bringing precious memories and spectacular games to Griffin and Ourfin. Best wishes. Thank you. pic.twitter.com/wi1bxu7tKk

The departures so far include mid laner Jeong “Chovy” Ji-hoon, support Son “Lehends” Si-woo, and top laner Choi “Doran” Hyeon-joon. It is worth noting that none of these three players were part of the Griffin testimony against former coach Kim “cvMax” Dae-ho. Doran himself was at the forefront of the drama with his benching at Worlds in favor of Choi “Sword” Seong-won.

Regardless of the reason, there are now three high-value players just waiting to get snatched up in the LCK offseason. Whether or not they will go their separate ways or try and join a team together is yet to be seen. They could also go the import route, as numerous LPL teams would pay top dollar to fly them to China.

The offseason is still young. We could see more Griffin players take their free agency in the coming days as talent continues to vacate that team. Notably, DragonX (formerly KingZone DragonX) and KT Rolster have multiple slots open for Griffin players to potentially slide into. Back from relegations, Hanwha Life will also likely look to revamp their roster.

The Griffin situation will reach a conclusion soon. The violative contacts have been disassembled, cvMax’s ban is being internally discussed, and Griffin’s punishment looms in the distance. Check back at Hotspawn for all the latest developments.