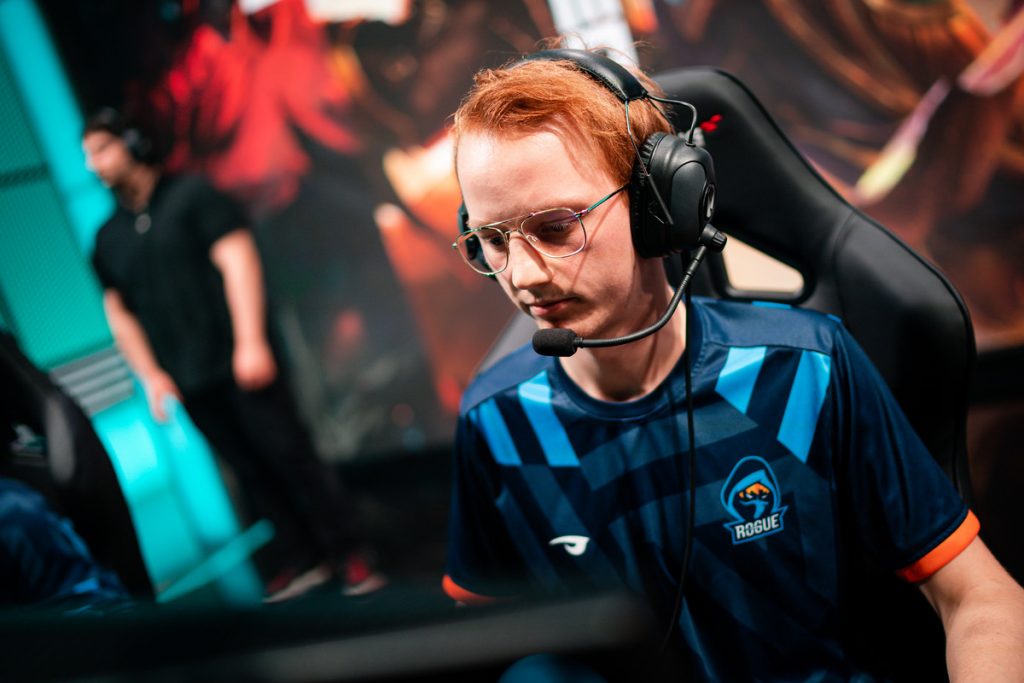 Larssen and Rogue are locked in for second place as the LEC heads into a break. Photo courtesy Michal Konkol for Riot Games.

He was touted as ‘promising’ last year, but this year he is truly fighting among the big names. Emil “Larssen” Larsson, mid laner for Rogue, is having an exceptional Summer Split so far. In the pandemonium of the Split, in which all teams take surprising wins off each other, Rogue has only lost against MAD Lions and G2. Fnatic, Misfits… all were taken care of. Friday, direct competitor Origen was shoved aside in one of the longest matches of the year. We spoke to Larsssen after his victory about how he stays focused when a match goes on for so long. He also spoke about Azir, which is seen as his signature pick, and what his actual favorite champions are.

Hotspawn: You just won against Origen in a match that was painstakingly qa
slow for at least the first 30 minutes, and then had long moments of inaction afterward as well. Do matches like these feel like a “snoozefest” to you in-game as well?

Larssen: I mean, for us it doesn’t really feel like that. We’re playing to win and we will have our full focus all the time. It’s not like we are shilling the game. I think we got a really big lead in the first 30 minutes. We got all towers I think, and I had a massive lead on the enemy mid laner. For us, in the game, it’s not like we’ll be shilling just because there is less fighting. The game becomes more about the macro play, and we were performing well in that area those first 30 minutes.

Hotspawn: How do you keep your focus when a match is so slow? When there is constant team fighting, you have to be on your toes all the time. I can imagine that you may drift off a bit when all you do is rotate to different lanes.

Larssen: Well, it’s less intense when you’re playing macro and aren’t fighting all the time, right? But you have more time to think about everything in the game.

Hotspawn: Following the draft, was it you guys’ intention to take it to the late game?

Larssen: No, that’s never the plan really. We just got into the game and play according to however it develops. You do the picks and bans, and then you just play the game. There are a lot of things that can happen during the game, so you just have to adapt to what happens.

Hotspawn: So when did you decide to play the game so slowly? In the beginning, you all were playing pretty aggressively.

Larssen: It’s not that we decided to take it slow. I think we were doing really well in the first 30 minutes. If Origen doesn’t want to fight, we can’t fight them, right? But we were getting a big lead by getting towers and getting a CS advantage. It was more on them than it was on us. If they would want to fight us, I’m sure we would fight. But they were playing very defensively.

Hotspawn: There are teams that play defensively and do it very well—it’s a popular style in the LCK. When you play against a more passive team, do you think it gives Rogue an extra advantage because you can flex your macro play?

Larssen: It’s not something you think about too much, to be honest. We just play our game. Always. You don’t really think about how the opponent plays. But for sure: if you play G2 or Fnatic, you know they will always look to fight. You know they will always try to teleport behind you. They will try to force good fights. Against Origen, you’re not as worried about it as against G2 or Fnatic. They won’t force as many fights. They’re more of a macro team. In-game, when we play against G2, Fnatic, or MAD Lions, we’re way more focused on not taking bad fights. They might teleport behind us and kill us all. Against Origen, it is more about the macro game.

Hotspawn: Do you enjoy being tested on that macro skill when you’re playing against Origen, or would you rather have a more fight-heavy game?

Larssen: Honestly, I prefer the team fights and the fights. It’s kind of boring to play this game. I was so strong, but I didn’t really get to use it in a real 5v5 fight. I don’t know if there even was a real 5v5 in this game. At the first Baron Nashor we got caught, and then it was just a mess. It was a messy fight and then the Syndra stole the Baron. But again, it felt like there wasn’t a real 5v5 fight. That’s kind of boring. When you’re as fed as I was—I had my full item build—you really want to fight and just murder the enemies, but I didn’t get the chance to. It would’ve been fun if there was a fight. 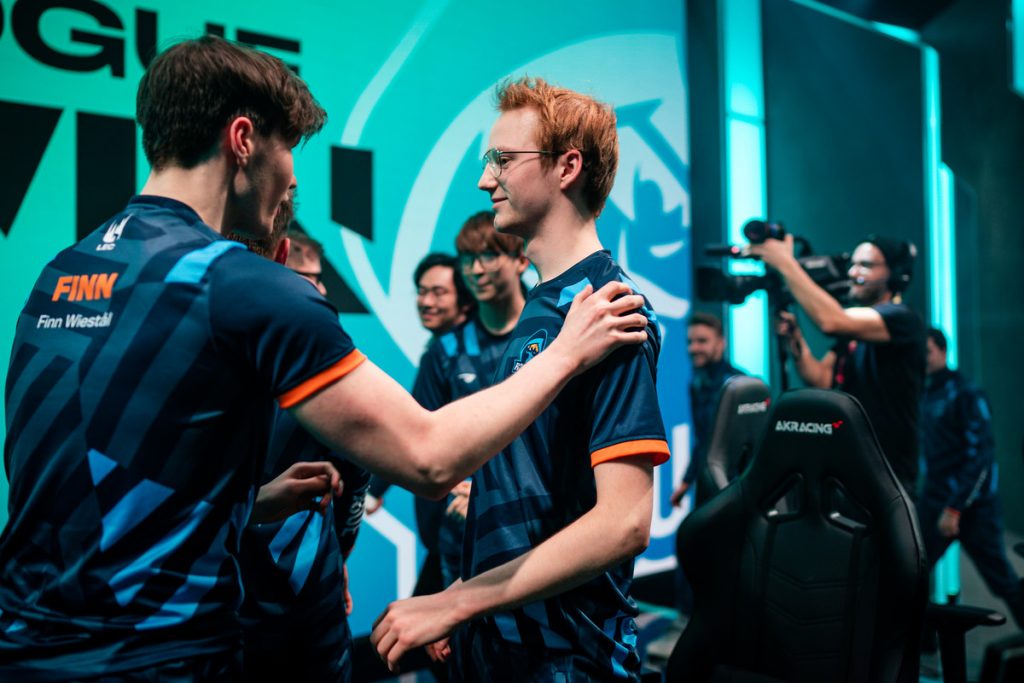 Hotspawn: This game you played on Azir, and the broadcast mentioned that it’s one of your signature champions. It showed: you were incredibly far ahead of Nukeduck in CS. What is it in Azir’s design that appeals to you so much?

Hotspawn: Is Azir your favorite champion to play?

Larssen: No, he’s definitely not. But I’ve played him a lot, right? So people might think that. My favorite champion is Fizz, but he has been really bad for a long time. He was only good in season eight during one patch, and then he got nerfed again. He was buffed, and then one patch later he was nerfed. That’s my favorite champion, I really enjoy playing him. I also enjoy playing Orianna a lot. I think, right now, she is kind of my favorite champion. It’s such a fun champ to play. With Phase Rush you can play really cocky.

Hotspawn: So you enjoy playing cocky champions then? As a Veigar main, playing against Fizz is one of the most frustrating things because he can just hop under your tower, kill you, and waddle away like nothing happened. Fizz is also a cocky champion.

Hotspawn: Haha, no I don’t have fun times playing against Fizz.

Larssen: Yeah, it’s fun being able to play more on the limit and being annoying to the enemy team like you can with Fizz, for example. But for me, on stage, I just play the champions that are necessary to win, right? I don’t really have time to play for fun. I just play to win.

Hotspawn: Even when you solo queue you don’t whip out Fizz every now and then to have some fun?

Hotspawn: Which champions are your least favorite to play?

Larssen: I think champions like Anivia, or Veigar, your main. Vel’Koz, Xerath… those types of champions. They are so boring to play. They’re just farming and they don’t have much playmaking ability. You kind of need the enemy team to run into them for those champions to start doing something. You need them to int, and then you can be really strong. I think those champions are really boring, because of that low playmaking ability. It’s really boring to rely on the enemy team to int. It works in solo queue, but in competitive play, it’s kind of hard to rely on the enemy to run into you.

Hotspawn: Still, even those champions that, as you say, rely on the enemy team inting, have had times where they were playable.

Hotspawn: Would you enjoy a hypothetical meta where every mid lane champion is viable and you can flex with whichever champion you’d like?

Larssen: If that was the case, I would not enjoy it. I’m only a human. I only have X amount of hours to play. If there are 60 champions I could play in the mid lane, it would be really annoying because it would take on my mental really hard. Right now you already don’t have much time to play. You have scrims and other things you need to do. Like, we have workouts two times a week, and you need to shill a bit as well, right? It would be really unhealthy if you could play every champion. It would just be super annoying for pro players.

Rogue plays its next match in the LEC Summer Split against SK Gaming on July 4th, at 5 pm CEST.