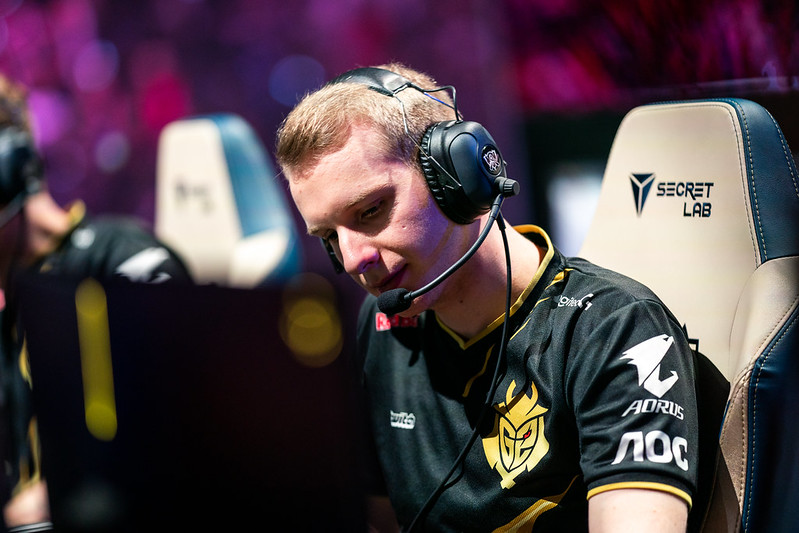 It was a rare down week for Jankos and G2 Esports as they opened the season 1-2. (Photo courtesy Michal Konkol - Riot Games)

The LEC opened their 2020 Summer Split with a special week one schedule. Instead of the typical two-day weekend, each LEC team played an extra game on Sunday to start the season.

G2 Esports and Misfits Gaming got off to rough 1-2 starts, while Fnatic and Rogue were the only teams to make it through week one without a loss. We take a look at where things stand in the LEC by looking at the top storylines so far in Europe.

After winning their third consecutive LEC title, G2 Esports decided to go back to the roster that brought them so much success in 2019. The roster that won both splits, won the 2019 Mid-Season Invitational, and finished second to FunPlus Phoenix at the World Championship. There was nothing wrong with G2 in 2020 Spring — they swept Fnatic 3-0 in the finals, after all — but the strengths of Rasmus “Caps” Winther and Luka “Perkz” Perković didn’t seem to be maximized. Caps is at his best when he can get out of lane and create plays around the map, while Perkz plays for lane kingdom. Neither style is necessarily the “right” way to play, but it’s obvious that the best version of G2 has Caps mid and Perkz bot.

It was no surprise to see G2 Esports obliterate MAD Lions in their first game with the 2019 roster runback. Uma Jan — Perkz’ ADC alter ego — was at his finest in his ADC return, making MAD regret letting Varus through the ban stage. Perkz was up 30 CS at 8 minutes, 55 CS at 20 minutes, and 80 CS at 25 minutes against Matyáš “Carzzy” Orság’s Kalista. Perkz finished 9/0/9, dealt a game-high 21k damage, and G2 easily put down a team that gave them trouble in the Spring playoffs.

But things wouldn’t be so easy for the rest of the weekend. Facing an Origen team that wanted to avoid starting the season 0-2, G2 got routed in their second game of the season. Andrei “Xerxe” Dragomir’s Sett controlled Marcin “Jankos” Jankowski’s Lee Sin, forcing the latter to a weak 0/6/4 score line. Not even the Ezreal/Yuumi combo could save G2 from the rough start.

G2 wrapped up the week with a game against Team Vitality. Team Vitality were the worst team in the league in the Spring, finishing with a 2-16 record. That said, they looked much more formidable with Aljoša “Milica” Kovandžić and Labros “labrov” Papoutsakis in their early win over FC Schalke 04. The new look Vitality took it to G2 in their first meeting in the Summer, winning 19 kills to 4 in only 29 minutes. Jankos went kill-less on Lee Sin again, while Mihael “Mikyx” Mehle had a rough 0/6/2 game on Tahm Kench.

Just like that, G2 went from a dominant start to a sub-.500 record. Extenuating circumstances, though, should give them a pass. Perkz lost his father to cancer last weekend, forcing him not only to play in such an emotional time, but travel for the funeral cut down on G2’s scrim time. As they are such a close team, there is no doubt that seeing Perkz go through such a devastatingly difficult time would affect his teammates as well.

G2 Esports will attempt to bounce back in week two with games against FC Schalke 04 and Rogue.

On the other end of the spectrum, both Fnatic and Rogue started their Summer Split hot. The two Spring playoff teams are the only two LEC teams to make it through week one unscathed. Fnatic picked up wins over Misfits Gaming, Team Vitality, and Excel Esports. Rogue also beat Excel and Misfits before ending the week with a victory over FC Schalke 04.

Fnatic started their Summer Split with an impressive comeback win over Misfits. Misfits got as far as 6k gold ahead, but Martin “Rekkles” Larsson’s 4/0/6 Ezreal kept Fnatic from toppling over. Against a team with Smite and Kalista Rend, Rekkles stole Misfits’ Baron attempt at 31 minutes to continue to close the gap. A final three kills to one team fight allowed Fnatic to steal the game away, especially considering they were still down 15 kills to 14 as they destroyed Misfits’ Nexus.

Rogue kicked off their season with one of the more impressive wins of the early season. Playing against Excel, Rogue didn’t concede a single kill in their 8-0 victory. The looming threat of Kayle, Yasuo, Ezreal, and Yuumi in the late game for Excel kept Rogue from playing too aggressively and throwing their lead, but they smoothly closed out their first win in 30 minutes.

Their win over Misfits in game two was similarly impressive. Rogue again never trailed, winning 17 kills to 2 in 29 minutes over the team they beat in the Spring playoffs. 0-3 FC Schalke 04 surprisingly put up the best fight against Rogue in week one, but Rogue conquered them as well, winning 23 kills to 11 in 39 minutes.

Both Fnatic and Rogue will be tested in week two. Fnatic match up against MAD Lions and Origen, while Rogue get the surprising 2-1 Team Vitality and defending champions G2 Esports.

MISFITS GAMING GET OFF TO SLOW START

Any way you look at it, the 2020 Spring Split was a resounding success for Misfits Gaming. After allowing Fabian “Febiven” Diepstraten to explore opportunities in the off-season, Misfits eventually decided to keep him and surround him with rookies and Ju “Bvoy” Yeong-hoon. Misfits got off to a hot start, and though they faltered at the end of the season, a 10-8 regular season with a playoff berth was more than anyone could have expected. This is the same organization that shelled out for a super team that flamed out spectacularly in 2018. Misfits got a better performing team for a fraction of the price.

Don't mind us, just getting all the int out.

With great performances from top laner Danny “Dan Dan” Le Comte, jungler Iván “Razork” Martín, and support Petr “denyk” Haramach — not to mention the career resurgence of Febiven — Misfits opened up their wallet to bring Kasper “Kobbe” Kobberup back to Europe. The addition of a second carry threat alongside Febiven would presumably continue to push Misfits up the European pecking order in the push for a World Championship berth.

However, the early returns on the new lineup have been disappointing. Misfits threw a big lead in their opener against Fnatic before getting thoroughly outplayed by Rogue in game two. Though both Spring playoff teams were tough opponents, Misfits would have liked to get off to a better start to the season.

They did rebound to avoid starting 0-3 with a big win over Origen. Misfits led 11 kills to 6 in their closely contested 31 minute win. Kobbe picked up his first game MVP with his new team, going 3/0/6 on Kai’Sa.

Even if Misfits started slow, it’s still obvious to see that Kobbe is an upgrade to the team. He picked up more than half of Misfits’ 15 kills against Fnatic (8/2/4) and already has half as many game MVPs as Bvoy had all of last split. As disappointing as their start is record wise, Misfits have to be happy with their new addition to the team.

Misfits will look to climb back above .500 with games against SK Gaming and FC Schalke 04 in week two.

G2 Esports look to get back on track against one of the undefeated teams in the league. Rogue tend to play a slow game, but that is tough to do against the mid game gods in G2. There’s no way you can count on Jankos having another off week, so Kacper “Inspired” Słoma will have to be on his game. With the final pick on red side, Rogue have the option of saving a counter matchup for top laner Finn “Finn” Wiestål or mid laner Emil “Larssen” Larsson.

A rematch of round 1 of the Spring playoffs,  Fnatic and Origen should again be two of the top teams in the LEC. Like G2 and Rogue, this is another matchup between a team off to a hot start, 3-0 Fnatic, and a team needing to stop the bleeding — 1-2 Origen. Both teams can play through any lane, but Origen will likely count on Barney “Alphari” Morris to do their heavy lifting. Alphari has been playing the best top laner in the LEC so far in 2020. On the other side, Rekkles has picked up the slack for his teammates in getting off to a 15/0/18 start in their three wins.