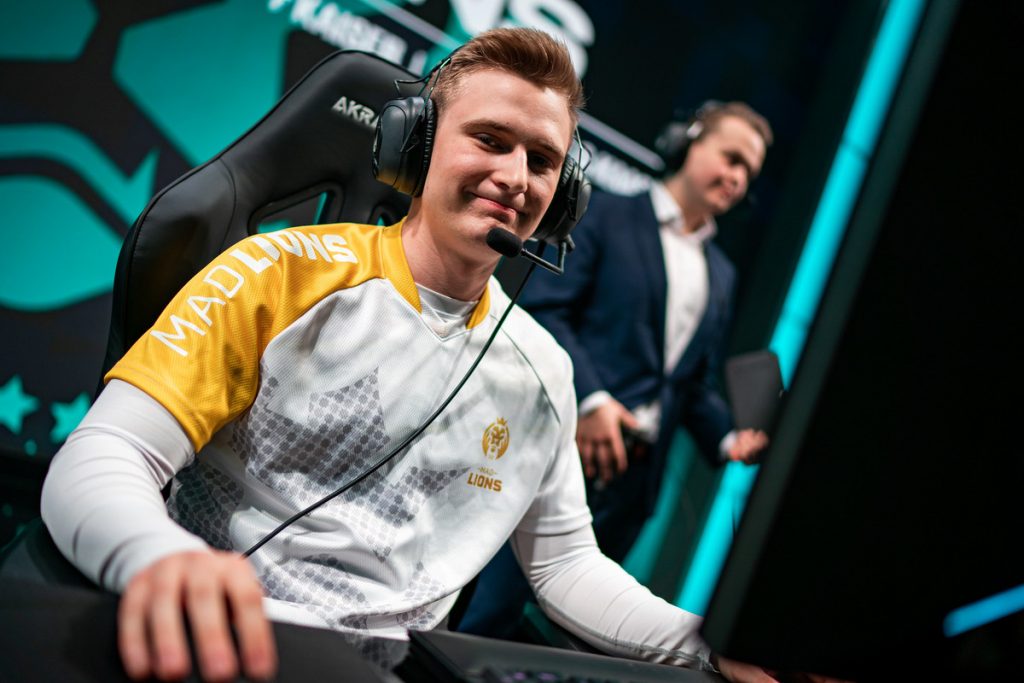 The League of Legends European Championship (LEC) has concluded the third week of the 2020 Summer Split. MAD Lions beat Rogue to claim first place in the LEC, while G2 Esports beat Fnatic in a rematch of the Spring Finals. We take a look at where things stand in the LEC by looking at the top story lines so far in Europe.

MAD LIONS ARE BEST IN EUROPE

MAD Lions ended week two atop the LEC standings with Rogue, but we still needed to see more from them. A win over Fnatic was nice, but they haven’t been in form to start the year. Wins over Excel Esports, SK Gaming, and Team Vitality also don’t earn the same respect, even if those teams have started the season better than expected. Opportunities against Origen and Rogue gave them a chance to announce themselves as the top team in Europe.

We take down @Rogue and take sole control of first place at the end of Week 3! #goMAD #MADWIN pic.twitter.com/VEQJboeRRV

MAD Lions took that opportunity and did just that, winning both games in emphatic fashion to sit alone at the top of the LEC. MAD began against Origen, one of the three best teams in the Spring Split. After a back-and-forth early game, MAD took an important three-for-zero team fight around Baron to take control of the game. Marek “Humanoid” Brázda and Norman “Kaiser” Kaiser both crushed their opponents, going 5/0/6 and 0/0/10, respectively.

Their next game was against 5-1 Rogue in a battle for the LEC’s top spot. Finn “Finn” Wiestål’s Illaoi gave MAD problems early, but Zhiqiang “Shad0w” Zhao’s Ivern controlled the pace all game long. His First Blood on Emil “Larssen” Larsson’s Ekko helped Humanoid have a perma-shove lane advantage in the matchup between Europe’s top two performing mid laners. When MAD finally secured Baron at 28 minutes, their 1-3-1 split push was too much for Rogue to solve. Larssen attempted a deep flank, but Matyáš “Carzzy” Orság’s CC-lock shut that down, allowing MAD to turn the fight around. MAD would close the game out up 11 kills to 4 in 32 minutes.

MAD’s early season loss to G2 Esports, as well as their semifinals loss in the Spring playoffs, still makes you wonder if they can beat G2 at their best — but that doesn’t matter right now. Right now, MAD Lions are the undisputed best team in the LEC, have the MVP front runner in Humanoid, and seem to get better every week. This great level of competition at the top of the league can only help the LEC produce teams better equipped for the rigors of international competition.

MAD Lions will hope to continue their reign at the top with a light schedule in week four. They open against the winless FC Schalke 04 before facing the 4-3 Misfits Gaming.

Rogue were the dark horse candidate to be an LEC title contender in 2020 Spring. The team followed a 10th place finish in 2019 Spring with a playoff appearance in 2019 Summer, improving as the season went along. They then upgrade their ADC position by signing Steven “Hans sama” Liv, while watching other top teams like FC Schalke 04 and Splyce get much weaker in the off-season.

Rogue improved record-wise to 9-9, but they didn’t make any improvement in the standings. Part of that can be attributed to the immediate impact of rookies on MAD Lions and Misfits Gaming, but the biggest problem for Rogue was clear: they could not beat the best teams in Europe. In their six regular season games against the top three in G2 Esports, Fnatic, and Origen, Rogue went 0-6. Against the rest of the league, Rogue went 9-3. Rogue were the LEC litmus test.

Rogue began this Summer 4-1 in the first two weeks, but their most impressive win was against a struggling Misfits team. A loss to G2 Esports may have had them questioning whether they had what it takes to beat the elite in Europe.

🚮 Things you can put in the bin:

Rogue led this game from start to finish, leaving no doubt that they deserved this win. Fnatic may be looking out of sorts to open the split, but Rogue couldn’t beat any of G2, Fnatic, or Origen last split no matter what form the opponent arrived in. Though Rogue then went on to lose to MAD Lions to concede first place, they still have to be happy to get that win out of the way.

Rogue will get another shot at upending one of their Spring nemeses in Origen to open week four. They then play SK Gaming to close out the week.

Both Fnatic and G2 Esports entered their first matchup of Summer at only 3-3, but the excitement for the game of the week was still there. Europe’s two most storied franchises and Spring finalists this time were battling it out to see who would be the first to get back on track after a slow start.

The game of the week unfortunately turned into the blowout of the week as G2 Esports ran away with it, winning 24 kills to 6 in only 25 minutes. This came despite the fact that Fnatic had a pretty nice composition into G2’s Twisted Fate/Pantheon global comp. Nemesis was only Galio to match any Rasmus “Caps” Winther roams, Martin “Rekkles” Larsson’s Aphelios welcomes short range engage, and Gabriël “Bwipo” Rau’s Ornn would be more impactful in skirmishes. Fnatic also had the better scaling with Ornn, Aphelios, and Selfmade’s Graves.

None of that mattered. G2 hit early and often, starting with a three-for-one trade bot to open the game. A four-for-zero fight at 13 minutes in G2’s favor made the kill count eight to two, and the route was on. G2 pushed their lead to 7.3k by 19 minutes, 10k by 23 minutes, and finished the game up 11.3k gold on Fnatic.

I’m so happy we won today with good performance!

As exciting as the win was for G2, it was also followed by a sad notice from Luka “Perkz” Perković. Perkz announced he will take a break from next week’s matches as he deals with stress. Perkz lost his father just prior to the start of the season. 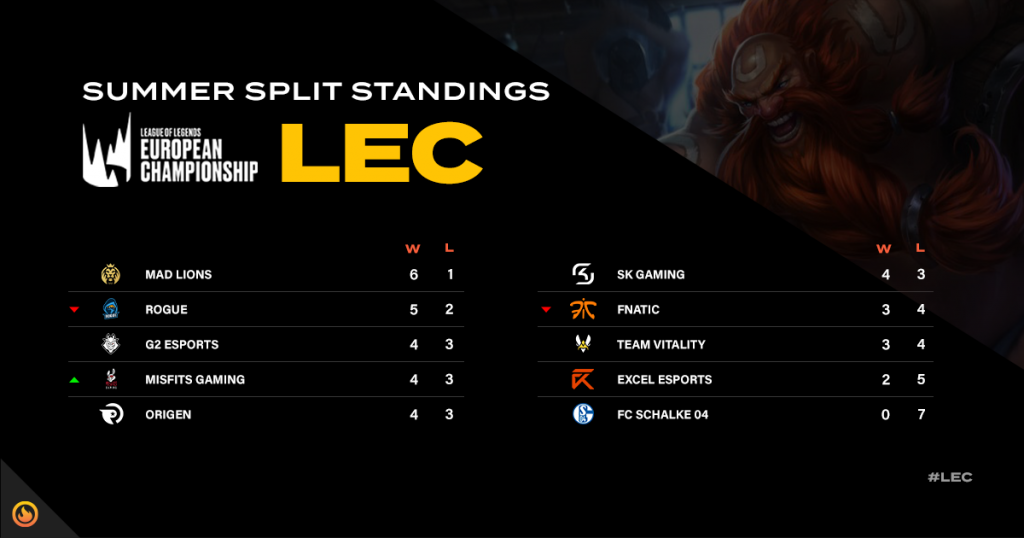 MAD Lions’ win over Rogue secured them the top spot in the LEC. Behind Rogue, four teams are tied for third at 4-3.

FC Schalke 04 continue to sit winless at the bottom of the standings. Fnatic’s fourth straight loss has moved them down to seventh place and out of playoff position.

Both Spring playoff teams have gotten off to a slower than expected start. Misfits Gaming climbed back over .500 after a 2-0 week three and are now on a three-game win streak. G2 Esports are coming off an emphatic win over Fnatic, but they’ll be missing the services of Perkz. G2 are expected to use former Gambit ADC Kristoffer “P1noy” Pedersen in his absence, but they also have another player in their starting lineup with ADC experience. Could Caps move back bot for a week?

Rogue and SK Gaming are both coming off highs and lows in week three. SK Gaming beat G2 Esports in their opener, while Rogue finally beat Fnatic. But SK followed it up with a loss to Team Vitality, while Rogue lost their grip on first to MAD Lions. It’ll be interesting to see which team responds this week. SK like to play through star ADC Juš “Crownshot” Marušič, while Rogue run through Larssen. This will be another good test for SK rookie mid laner Dirk “ZaZee” Mallner.