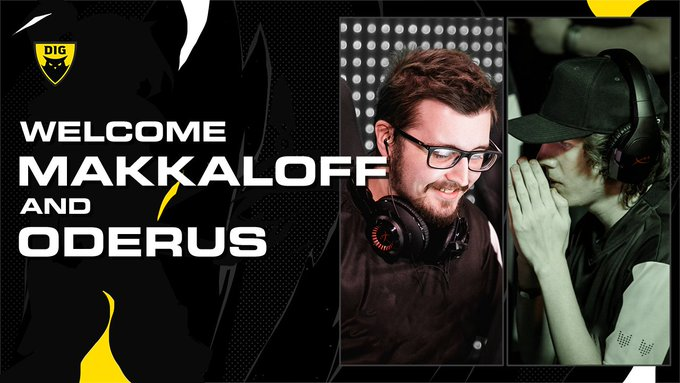 The team signed Makka and Oderus just in time to compete in the first NA qualifier for the First Strike event. (Photo courtesy Dignitas)

Dignitas filled the two open slots on their VALORANT roster on Monday by signing Bryan “MAKKA” Droulliard and Chad “Oderus” Miller. Before joining Dignitas, both players competed together for Morning Light’s VALORANT team. Dignitas signed the American players just in time to compete at the First Strike: Nerd Street Gamers Open Qualifier which is the first VALORANT First Strike qualifier and also started on Monday.

The Dignitas VALORANT team is still pretty green behind the ears. The organization signed the core of the Homeless roster to be their initial VALORANT roster in August. Only ten days after signing their inaugural lineup, the team competed at the A-Tier Pop Flash event, where they managed to reach the semifinals where they were eliminated by Team Envy. Despite the decent debut showing, Dignitas decided to release Kevin “Poised” Ngo and end the trial of Ryan “Shanks” Ngo in September, after the players only competed with the team for a month.

MAKKA is a tactical shooting veteran who has several years of professional CS:GO experience under his belt. He played with a variety of Counter-Strike teams from 2016-2018, including Ghost Academy, Ronin, and The Pioneers. He retired from CS:GO in 2018, but he returned to professional competition in VALORANT in June of 2020. He initially played for N$IC before joining Morning Light’s roster in July.

Oderus is also a Counter-Strike veteran, who competed in CS:GO for over five years before switching to VALORANT. During his time playing Counter-Strike, he played with notable teams like Swole Patrol, Spacestation Gaming and Ghost Academy. While with Ghost Academy, Oderus competed alongside MAKKA in late 2017 and early 2018. The player joined Morning Light’s Counter-Strike team in April of 2020, before subsequently making the jump to their newly minted VALORANT squad in June.

While MAKKA and Oderus played together for Morning LIght, they won a number of C-tier events and saw a fourth place finish at the B-Tier Pulse Series VALORANT tournament in September. Although their placements weren’t particularly exceptional, their performances were good enough to catch the notice of Dignitas. The players will make their debut on Monday at the First Strike: Nerd Street Gamers Open Qualifier.

Apex Legends Valorant
Share
Aaron Alford
Aaron is a 25 year old esports journalist who has worked with dotesports.com, upcomer.com, qrank.gg, among others. Aaron completed a Master's degree in Communication from the University of Dayton in 2018 (Go Flyers). Aaron has also worked as a national circuit debate coach and communication manager for emerging technology companies.
Follow me