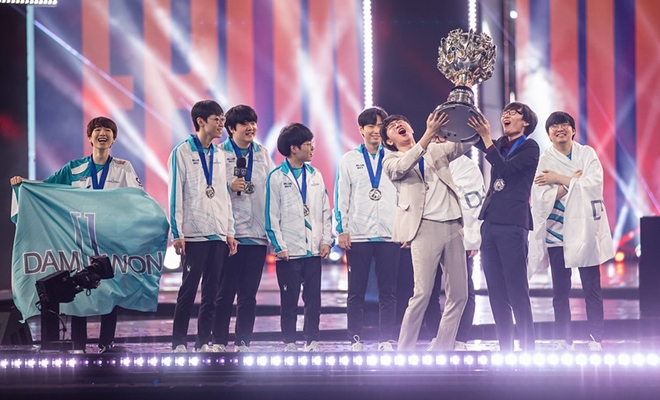 After being greeted by silence form the Chinese crowd, Damwon completed their Worlds 2020 run with a 3-1 win over underdogs Suning Gaming. (Photo courtesy Riot Games)

South Korea’s reputation for producing seemingly untouchable, world-class teams has plateaued in recent years as China and Europe spearheaded the global meta with their aggressive play. The region once feared for its risk-averse and constricting play style went through a crucial period of growth as new talent began to rise up in the scene.

Now, after two years of middling international results from Korean teams, League of Legends Champions Korea’s first seed Damwon Gaming restored glory to the region at the 2020 World Championship by winning 3-1 over Suning Gaming by playing their own style. Damwon’s victory could mean the beginning of a new era for the LCK.

New kids on the block

From testing seemingly outrageous strategies on stage to cracking jokes after knocking their rivals out of Worlds, this Damwon team has wholly denied the crass “Korean villain” archetype that LoL fans so frequently love to assign to LCK’s powerhouse teams. And thank god for that.

Back in 2018, then-Worlds finalist Martin “Rekkles” Hansen praised a young Damwon team that had yet to qualify for the LCK and had been smacking that Fnatic roster around in scrims. Talks of them dominating teams in scrims still rang true leading up to this year’s tournament despite the roster being slightly different this year with Jang “Ghost” Yong-jun starting in the bot lane over Sin “Nuclear” Jeong-hyeon.

The interesting thing about this team is that their scrim performance definitely translates to their stage games. Damwon are a fun team to watch because they’re a crazy combination of individual skill and calculated map play with a healthy bit of hubris sprinkled in. They’re not afraid to go for high-variance plays or strategies to crack the game open and gain an insurmountable edge over their opponents.

In 2019, the team’s first Worlds appearance, top laner Jang “Nuguri” Ha-gwon famously ran Kleptomancy, an incredibly unconventional and niche rune, on Jayce up against one of the World’s best top laners, Kang “TheShy” Seung-lok of Invictus Gaming. It’s this level of confidence in their own individual player that continues to define Damwon’s players. They so clearly want their individual play to shine, yet they’re one of the best teams in the World at syncing up plays and playing together as a cohesive unit.

Damwon just want to have fun

During Damwon’s first World Championship appearance in 2019, they were tragically knocked out by G2 Esports, who ultimately advanced to the grand finals, in a 3-1 quarterfinals series. At the 2020 World Championship, Damwon denied G2 of their shot at winning it all by knocking them out in the semifinals with the same game record.

To make the victory even sweeter, they even reenacted the same post-game victory celebration that G2 did after they defeated Damwon’s fellow LCK representative, Gen.G, in quarters.

Damwon were able to win Worlds this year through a combination of factors such as immaculate teamfighting and utilization of fog of war, having incredible draft flexibility due to wide champion pools, superior Dragon control (which was crucial at this year’s Worlds), and simply having better individual players than their opponents across the board.

In the past, the most dominant Korean teams, such as the 2014 championship Samsung White roster, played almost perfectly around vision and capitalized on opponents’ mistakes to close out games cleanly. As the meta shifted to focus more on solo lane matchups and skirmishing around early objectives around 2018, LCK teams initially struggled to match the aggressive playmaking styles of other leagues such as the League of Legends Pro League and the League of Legends European Championship.

Damwon’s victory at Worlds 2020 was so significant because while they excelled at these key factors that were historically emblematic of the LCK’s style, that just came as second nature to them. They proved themselves as a team that wasn’t afraid to contest objectives from behind by looking for crazy engage angles, normally lead by their unrelenting support Cho “BeryL” Geon-hee, or play selfishly in lane to gain an advantage for the team down the line.

But sometimes, they’ll hunt for kills and spam emotes afterwards.

Can we stop acting like Korean teams are robots, now?

Probably the biggest impact that Damwon’s championship win could have on the LCK is a change in the community’s overall perception of the league. In a region containing the undisputed greatest player of all time in Lee “Faker” Sang-hyeok, it’s hard to break away from stereotypes of being a “villain” that people want to see lose. Damwon reminded us that there are players within the LCK that wear their love for the game on their sleeve and are itching to make a name for themselves by playing their own way.

In the press conference following the finals, Damwon Head Coach Lee “Zefa” Jae-min said “I believe the LCK will continue to grow stronger,” when asked about the future of the region. Just as people did with the LPL after IG’s 2018 World Championship win, it won’t be surprising to see more people inspired to watch the newly-franchised LCK in 2021 to follow Damwon’s journey and keep an eye out for rising stars.