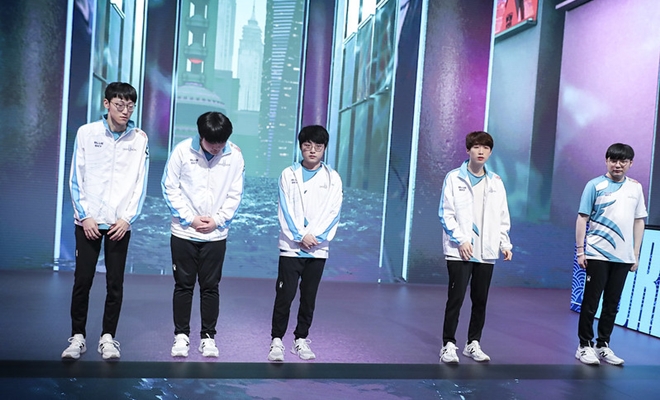 With this win, Damwon Gaming have won 25 consecutive games on blueside since the Mid-Season Cup. (Photo courtesy Riot Games)

Damwon Gaming will advance to the League of Legends 2020 World Championship semifinals in style after a 3-0 sweep against their rivals DRX. Many analysts predicted this outcome ahead of the matchday, however, their dominance in a best-of-five straight out of the Main Group Stage is further proof that they have what it takes to go all the way.

During their press conference after the match, DWG players and staff discussed their path forward at Worlds, a potential rematch against G2 Esports in the Semifinals, and their growth as players.

DWG was rated by many as a favorite to take the Summoners’ Cup this Worlds, and they showed us why that is in their quarterfinals match. Against DRX, Damwon displayed a masterful understanding of how to execute on their win conditions. By not playing into DRX’s early aggression, they managed to consistently hit key item marks on their carries and find angles for fights that would turn the flow of the game in their favor. A great example of that is seen in this fight from game two, where they caught DRX getting complacent with their lead in the mid lane.

This type of tempered aggression is made possible because of the way Kim “Canyon” Geon-bu and Heo “ShowMaker” Su play out the early and mid game. Rather than looking for all-ins or over-forcing for objectives, they track the movements of the enemy mid/jungle duo and react accordingly. They don’t care if they concede a Dragon or two in the early game because of this, since the gold earned will put them in a better position to fight later on.

When asked about this disciplined and team-centric style that differs from the Showmaker that people love to watch clips of online, Showmaker mentioned that it was due to a shift in mentality influenced by his international mid lane rivals.

“The champions I play this year are very different from those I played last year. In 2019, my mindset used to be, ‘Get fed to kill everyone’,” he said. ”After watching Doinb lift the Summoner’s Cup and losing to Caps last year, my mindset changed, where if I get fed, the team gets strong, and when the team’s strong, we defeat our enemy. Doinb and Caps inspired me to the point of being detailed in keeping Summoner spells as well. In terms of being a great mid laner… Mids who are great at teamplay are very good. I believe that having priority in lane to get the initial push and roam is optimal in the current meta.”

In his 10 career games on Twisted Fate, ShowMaker only lost once – vs @DRXGlobal in week 4 of the LCK 2020 Summer Regular Season! #Worlds2020

The former Katarina one-trick went from having one of the most-feared Akali’s in the world to carrying his team to victory at the World Championship on Twisted Fate with smart rotations. The flexibility of Showmaker and his teammates has been one of DWG’s greatest strengths throughout the entire year.  If they continue to play like they’ve shown so far, they’ll have a clear path to the finals regardless of their next opponent.

In 2019, Damwon entered Worlds as a team of young players that loved to play fast and were eager to prove themselves on a big stage only to be knocked out in the Quarterfinals by G2. Now, with G2 favored to win their Quarterfinals match against Gen. G on October 18, a potential rematch against the team that crushed their hopes isn’t totally out of the question.

“We’ve changed a lot from last year,” Showmaker said when asked about the possibility of meeting G2. “Even if we were to meet G2 Esports in the semifinals, it wouldn’t be that we learned from the loss last year, it would be because we’ve grown massively.”

A theme throughout the conference was that despite being such a dominant team compared to the opposition they’ve faced back in Korea and at the 2020 World Championship so far, DWG have been able to identify and correct their weaknesses and refine their unique individual strengths.

DWG coach Yang “Daeny” Dae-in is confident that if they continue to focus on playing their own game and being critical of their gameplay, rather than focusing too hard on what other players are doing, they’ll be a team that can go far at Worlds.

Damwon Gaming will play their next match in the Semifinals on October 25th at approx. 3:00 a.m. PDT against either G2 Esports of Gen. G.