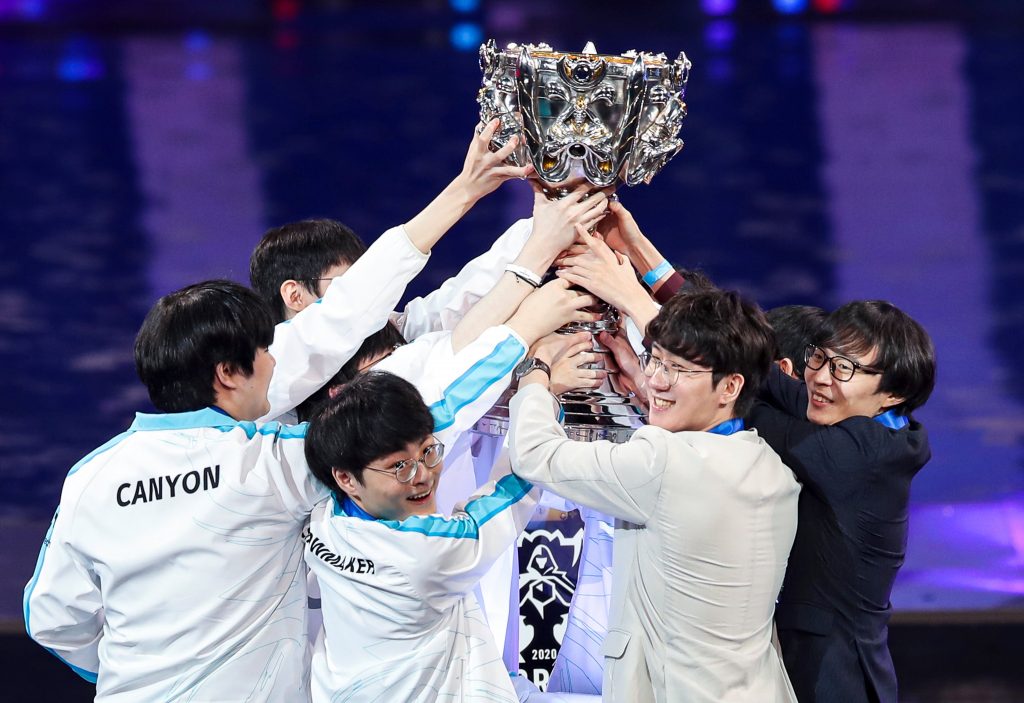 The 2020 League of Legends World Champions have been crowned. After an intense back-and-forth series, DAMWON Gaming have reclaimed international supremacy for Korea with a 3-1 win over Suning. Canyon may just have renamed jungle gap to jungle canyon with his performance, earning Finals MVP.

While the underdog run of Suning is over, they proved to be the best of what is still the deepest region internationally. Both Suning and DAMWON Gaming look poised to remain top contenders in 2021 with strong players returning.

The start to the series proved that this would not be a one-sided affair like so many championship matches of the past. Game one began relatively quietly, not surprising considering the stakes. Lê “SofM” Quang Duy’s River Shen struck first, picking up First Blood on Jang “Nuguri” Ha-gwon’s Ornn at 10 minutes. On the other side, Kim “Canyon” Geon-bu’s Graves started the dragon stacking for DAMWON Gaming, putting them on Soul Point only 22 minutes in.

With Suning up 2.3k gold at the time, it looked like they should be able to fight for the objective. DWG’s team fighting was simply better, allowing them to take a four-for-one fight, Infernal Soul, and a small gold lead. However, Suning did not give up. Despite fighting against the Infernal Soul buff, Suning won the next team fight four-to-one and took Baron. Suning also took Elder Drake, though they eventually lost all five members in the fight.

In spite of those hiccups, DWG were still in the driver’s seat when those buffs expired. Heo “ShowMaker” Su’s Orianna caught out Hu “SwordArt” Shuo-Chieh’s Leona at 35 minutes, giving DWG an uncontested Baron. That was the beginning of the end for Suning, as DWG used the buff to take towers, an inhibitor, and Elder Drake. One more Baron would be enough to secure DWG the 21 kill to 12 game one win in 44 minutes.

For the majority of game two, it looked like DWG would take a quick 2-0 lead in the Finals. With Canyon’s First Blood and early Rift Herald capture, DWG built a 2.4k gold lead by 15 minutes. But like game one, the dragon stacking went to the other team. DWG denied Cloud Soul at 22 minutes, but could not stop Suning at 28 minutes. Suning’s four-to-one team fight win gave them Cloud Soul, Baron, and control of game two.

With the lead in hand, Chen “Bin” Ze-Bin’s Fiora knew how to close it out. Barreling down mid lane grouped as five, Suning ran down a retreating DWG at 34 minutes. As each DWG member fell, the anticipation grew as Bin’s name continued to flash on the screen. After he took down the first three, Suning set him up for the final two kills. Jang “Ghost” Yong-jun’s Aphelios and Cho “BeryL” Geon-hee’s Thresh were corralled, allowing Bin to pick up the first ever pentakill in a World Finals. Suning immediately closed the game out, tying the series up with a 20 kill to 12 win in 34 minutes.

DWG didn’t take too kindly to that pentakill. They came out of the gates on fire in game three, starting with Canyon’s early First Blood on Bin. DWG became the first team in the series to start out with the early gold lead and capture the early dragons, setting up for a quick Cloud Soul just past 20 minutes. Suning made it interesting with a winning team fight that resulted in Baron, but DWG regrouped well. A kill on SwordArt’s Alistar allowed DWG to grab Baron, win the ensuing team fight, and quickly close out the game. DWG won game three 16 kills to 11 in 35 minutes to put Suning on match point.

The win moment for Ghost and ShowMaker! 🏆 pic.twitter.com/p3hhSaVDlw

Smelling blood in the water now, DWG had their most dominant performance of the series. BeryL’s Pantheon picked up First Blood in a 2v2 bot, Canyon’s Kindred secured the first four drakes of the game, and DWG led from start-to-finish in an anti-climactic game four. Canyon (8/0/7) was the star of the show, camping Bin’s Gangplank (2/9/1) while keeping up in farm with SofM’s Graves and securing objectives. He created an aptly named jungle canyon over SofM, resulting in Canyon being named Finals MVP. Canyon finished a combined 23/9/26 in the series.

Korea has reigned over the professional League of Legends scene for most of its history. Ignoring the Season 1 World Championship before Korea’s scene was established, nobody could really compete with the region. Taipei Assassins took Season 2 over Azubu Frost, but Korea then ripped off five consecutive championships, the last three of which were LCK versus LCK finals. Every year there would be rumblings that the rest of the world was catching up, but every year Korea would emphatically squash that notion at Worlds.

That is, until 2018. Not only did Korea not win the championship, they did not even make it to the semifinals. Gen.G finished 1-5 to fall in the Group Stage, while Afreeca Freecs got swept by North America’s Cloud9 and KT Rolster fell 3-2 to Invictus Gaming. iG would go on to 3-0 Fnatic in the Finals, giving the LPL their first World Champions. Korea again failed to even make the finals in 2019 as the LPL once again were crowned, this time FunPlus Phoenix. Korea were not only no longer the dominant region, they had fallen behind Europe in the pecking order.

So, when DAMWON Gaming dominated Korea in the Summer Split, there were still reservations about their place in the international hierarchy. The LPL’s international dominance spoke for itself, as did G2 Esports’ track record with the same roster. We know that teams feared DAMWON Gaming in scrims, but we still needed to see it translate to the games that counted on stage.

The LCK would like to sincerely thank the fans who continuously showed their generous support, and the players and teams who worked so hard throughout the obstacles of this year. We are so proud of you!

DAMWON removed those doubts almost immediately, going 2-0 over popular pick JD Gaming in the Group Stage to top Group B. Another quick 3-0 in a rematch of the LCK Summer Finals set up a rematch of the 2019 quarterfinals against G2. DWG backed up their talk of revenge, beating G2 3-1 to head to the Finals to face the unbeatable LPL. DAMWON completed the LCK’s redemption arc there, slaying the top LPL team to regain the international throne for the LCK.

While it is a return to the top, it still does need to be mentioned that this was not a return to the dominant past for the LCK. While DRX were unfortunate to face DWG in their first knockout match, Gen.G were crushed 3-0 against G2 in the quarterfinals. Neither Gen.G nor DRX looked to be on the level of top contenders, so the depth of the LCK still falls behind the LPL. But, in the end, the LCK had the best team of them all.

Though they lost in the Finals, we can’t forget what a run it’s been for Suning to make a deep run in the tournament. They entered Worlds as a distant third seed behind JD Gaming and Top Esports in the LPL. Though they crushed LGD Gaming in the Summer Playoffs and Regional Finals, Suning also were swept by TES. Their draw into Group A was fortunate, but G2 Esports were still the favorites.

After losing to G2 Esports in their first matchup of the group, Suning won their rematch in their final game of the group to set up a tiebreaker. Suning once again won that matchup, giving them a coveted first seed out of groups. Unfortunately for them, they drew by far the strongest second seed in JD Gaming for their quarterfinals matchup. Undeterred, Suning pulled off a huge upset to advance to the semifinals. Now facing the pre-tournament favorites in TOP Esports, Suning once again pulled off a domestic upset, unseating the two LPL teams expected to compete for the title.

It's important not to lose perspective in the face of defeat. The first ever Pentakill in Finals, SofM's crazy builds and csing, Huanfeng and Bin's astronomical growth, Angel's beautiful Akali. Congratulations @suning_gaming on an astronomically successful Worlds debut! pic.twitter.com/WGnJOPOP3k

We know how the Finals ended against DAMWON Gaming, but Suning can hold their heads high as they proved themselves to be the best team in what is still the strongest region in the world. With such a young roster, their future remains very bright.

Suning’s two veterans and imports, SofM and SwordArt, are the two players with contracts set to expire next month. While it seems obvious that Suning would want to keep the team intact, they actually have several options because of their great development system. Top laner Yu “Biubiu” Lei-Xin, jungler Wei “WeiWei” Bo-Han, and ADC Lee “Samd” Jae-hoon all return on loan from Victory Five, where the team went 11-5 in the Summer. It would be shocking to see Bin or Tang “huanfeng” Huan-Feng replaced, but Weiwei could capably fill SofM’s shoes if needed. Regardless of how Suning handles their roster this offseason, they have an abundance of talent to stay atop the LPL.

On the other side, DAMWON Gaming will have some negotiating to do. Lee “Flame” Ho-jong must complete his military service, so it is even more imperative for DWG to re-sign star top laner Nuguri. Likewise, BeryL’s roaming became such an integral part of DWG’s playstyle that it would be a huge loss if he were to move on in free agency. Canyon, ShowMaker, and Ghost all remain under contract through 2021, so DWG will return with a solid core, no matter the free agency outcomes of Nuguri and BeryL.