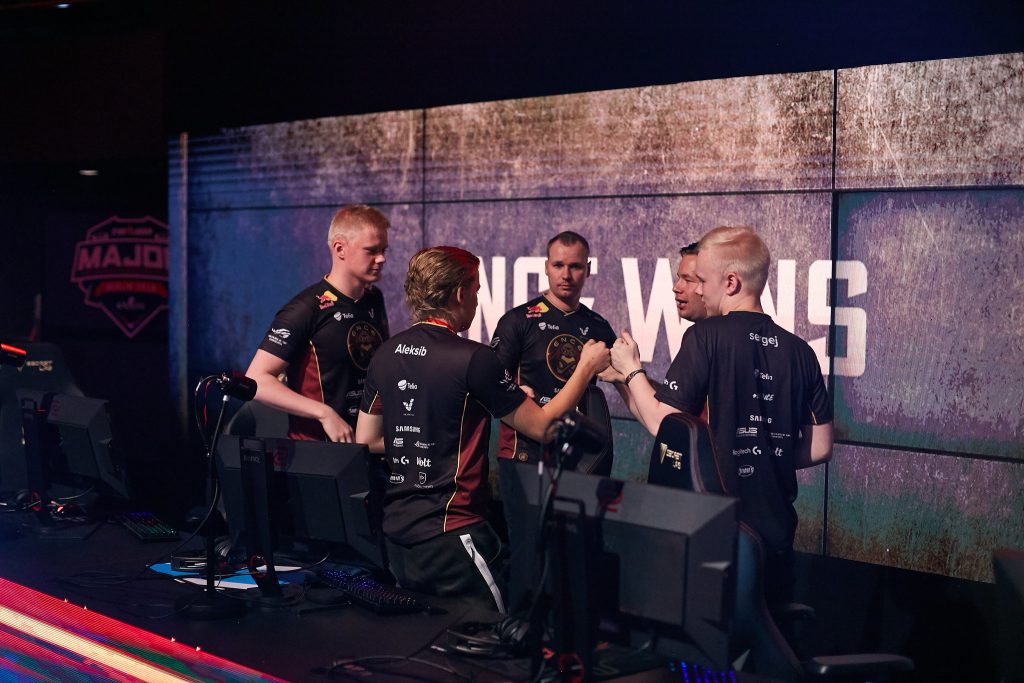 ENCE advanced through the Legends Stage of the StarLadder Berlin Major. (Image via StarLadder)

The StarLadder Berlin Major has just concluded its Legends Stage, promoting successful teams to the Champions Stage, while the rest go home. Throughout the week, we have had some of the most exciting and crazy stories, with a world record tied, huge teams looking weak and prestigious names going home early. The impact of the results in this stage of the major makes the next stage of the tournament even more exciting. Lets taking a closer look at the Legends Stage.

Nothing to Lose, Everything to Gain

Three of the most unexpected results in this stage of the tournament come from ENCE, NRG Esports and AVANGAR. These three teams have their own stories but ultimately fall under this header. AVANGAR is a CIS team coming through the Challenger Stage that were overlooked. NRG recently restructured and advancing far is a good sign. Finally, ENCE are kicking in-game leader Aleksi “Aleksib” Virolainen and will reform post-Major with role switches and a new player joining. Looking at these three teams, it makes sense for them to exit this stage. Instead, their resilience shone. All three advance to compete in the Champions Stage.

As stated, AVANGARis a CIS team that advanced from the Challenger Stage last week. At first glance, they were one of the teams that were expected to exit early. Instead, AVANGARperformed well and advanced with a 3-1 scoreline. They played against ENCE, Renegades, Team Liquid and G2 Esports. Their most legit win was against Team Liquid. Team Liquid are the tournament favorites, given that we are in the Team Liquid era. Taking their scalp and putting them into 1-2 bracket is a great achievement AVANGAR should be proud of.

3-1 & @avangarkz! @AdreNcs talks me through every match they played, if it feels like the Gambit run, how the team is improving each game, what they need to work on and a big congrats to @xDsanji on being the first Uzbekistan 🇺🇿 to make play offs at a major! #BerlinMajor 👏🏼👏🏼 pic.twitter.com/xJxCxKC9Um

ENCE had arguably the most interesting 3-0 in Major history. With the incoming roster moves to the team, expectations for this team don’t hang high. However, ENCE has performed marvelously. They went 3-0 in the Swiss system with Team Vitality being the only team to take them to ten rounds on a map. For a team about to reform, these results are unprecedented. The first two games they played were lower quality matches which play a major role in this. But still, it’s a sign of how far ahead they are.

NRG Esports is another example of a surprise. NRG Esports coming into the Challenger Stage faced immediate defeat to DreamEaters. They then had to pick themselves up in that period and advanced on a 3-1 scoreline. With this look, this team appeared to be struggling. However, the roster most certainly adapted and now they look like they may even be in the running for the Major trophy. Their victory over Astralis shows they are indeed capable of taking scalps with their reformed roster. What’s even better about the match between Astralis and NRG is the train map tied the Major record for longest map. NRG won the map 31-28 tying the record between Mousesports and Flipsid3 in 2016. In addition, they also crushed Team Liquid in a best-of-one on Dust II. NRG clearly can overcome pressure and fight formidable foes at the same time.

Heading Home on a High

Mousesports and CR4ZY went from the EU qualifier all the way to the 2-2 round in the Swiss system. They both faced difficult opponents, with mousesports facing Team Liquid and CR4ZY facing off against Na’VI. Both teams failed to defeat their opponents in the 2-2 bracket, but that doesn’t mean they should go out in sadness.

Mousesport had one of the hardest runs through the Legends Stage. They faced off against FaZe Clan, North, Na’Vi, Vitality and Liquid. Mousesports went into the upper bracket with their 2-1 and 2-2 series against the world number one and two (Liquid / Vitality). Arguably, the new ELO and HLTV-inspired seeding made mousesports’ run the hardest in this stage of the tournament. Despite that, Mousesports put up a fantastic series against Team Liquid. They lost the series 0-2, with both losses in overtime. In spite of their exit, their performance looked great. Özgür “woxic” Eker continued his stellar performance as one of the better AWPers in the scene. Meanwhile, Finn “Karrigan” Anderson had an amazing series for in-game leading and fragging. In addition, their 17-year-old star, David “frozen” Čerňanský, stepped up and challenged Jonathan “EliGE” Jablonowski as a contender for one of the best SG users. It’s a shame that they couldn’t attend an onstage match in Germany once again. But, with their results so far, this mousesports roster is a great team with a great future ahead of them.

An ace a day keeps the doctor away? @karriganCSGO 💪#ReadyWillingAble

As for CR4ZY, this team has been on a sharp rise in recent months. The team consists of talents floating in the tier two scene with mixed results in their careers. Nemanja “nexa” Isaković is one such player who has jumped around teams over the last 18 months. Now, he has found a home to really shine with his IGL capabilities. This is the same for other teammates, like Rokas “EspiranTo” Milasauskas, who was a part of The Imperial roster with nexa. But the most heartfelt narrative of all these players belongs to Nemanja “huNter-” Kovač. No more should he be known as Nikola “NiKo” Kovač’s cousin. His performance in this Major shows that he is a great talent in his own right, and arguably a better player with a better team considering the results in the Legends Stage. This team is a great underdog success and the future looks bright for them.

Concerns for the Major Contenders

Astralis and Liquid both look mortal. The current major champion, Astralis has tied the record for a match in overtime with NRG, and they also lost to Avangar. Meanwhile, Team Liquid was upset by CR4ZY and NRG.

Astralis this tournament look they don’t have their flare anymore. Against big teams in big tournaments, each member on their team can clutch, win rounds, and support each other in executes. In their matches vs NRG and CR4ZY, they appear to lack that x-factor that was omnipresent in the Astralis era. This is a worrying sign for the Danes as it has already shown that it has lost them games this tournament. They will need to regain that old confidence if they wish to push further.

No pun intended, but this was a crazy match. We faced a tough opponent who pushed us to the limit with 5 overtimes.

Senpai @zonic_cs is tired after another marathon match, but happy with another top 8 at a Major 🔥#ToTheStars ✨ pic.twitter.com/duEWQpixKH

As for Team Liquid, they were clearly the world best before the talent break. Although, coming back into the swing of things has been slow for them. Team Liquid has lost to teams they simply shouldn’t be losing to. This made them compete in the lower bracket, having to climb from the brink of elimination to the Champions Stage. By the end of the Swiss system, that pre-break form seemed to have returned. Especially so in the mousesports series where round wins thought unthinkable were won on great plays. This warmup is great for them but there are clear weaknesses they must be aware of heading into the next stage.

With the Legends Stage done, the next phase of the Major is the Champions Stage playing throughout September 5–8 on Starladder or GOTV channels. The remaining eight teams will compete to determine the winner of the Berlin Major and win that US$500,000 grand prize.