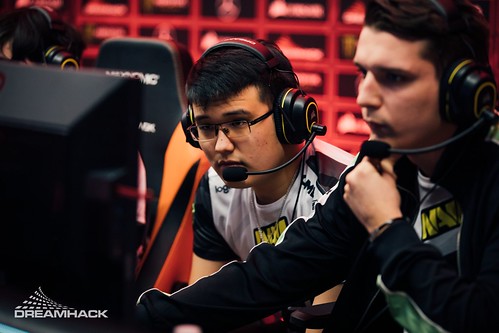 Zayac is set to head to Virtus.pro, just days before the start of the Major qualifiers. (Photo courtesy DreamHack)

Na’Vi have announced its team for the upcoming Dota Pro Circuit qualifications. Among the announcement, revealing that team captain Bakyt “Zayac” Emilzhanov will be departing the organization. The news first emerged in a video published on Na’Vi’s YouTube channel, before being confirmed in a tweet by StarLadder. With his departure, Zayac is allegedly joining Virtus.pro ahead of the qualifiers.

🔥 Meet the @natusvincere roster for the qualifications for the upcoming major. @c_slayerRR joins team as the stand-in.

In a video titled “NAVI CEO comment on Dota 2 team situation”, Natus Vincere CEO Yevhen “HarisPilton” Zolotarov details the complications and issues which have led to Zayac’s departure. In a detailed retelling of the situation, he explains that Zayac’s desire to leave had been known since the conclusion of The International 2019. The chief motivation for the move was allegedly an aspiration to play with Vladimir “No[o]ne” Minenko and  Alexey “Solo” Berezin on Virtus.pro.

Zolotarov explains that Zayac’s most recent request to leave Na’Vi had come following the team’s elimination at the DreamLeague Season 13: Leipzig Major. While Na’Vi performed well in groups, they were quickly eliminated in the Playoffs, leading to a disappointing 13th-16th place finish. After initially trying to work out a transfer agreement with Virtus.pro, Zolotarov reports that Zayac had sent him a message with “legal context,” in which the player declared his contract to be null and void.

Issues had allegedly existed between Na’Vi and Zayac as far back as October last year. However, despite these conflicts, Zayac was convinced to extend his contract through 2020 after both a pay increase and the team’s decision to make him captain. After these promises were made, Zolotarov claims that an administrative mistake by team manager Igor “Caff” Sydorenko meant these new terms were never included in the newly extended contract.

ICYMI: Yevhen "NAVIHarisPilton" Zolotarov commented on the situation regarding our Dota 2 roster!

UPD: English subtitles have been added!

Describing the omission of the new terms in Zayac’s renewed contract, Zolotarov describes it as “A serious enough screw-up and that there have to be consequences for our employees, including our legal counsel who overlooked it.” Zolotarov, however, goes on to explain that losing their manager of eight years was a consequence they couldn’t face. Zayac has allegedly used this omission of terms as the basis of his departure from Na’Vi.

Zolotarov concludes his video with a call to action for CIS organizations to meet up and discuss the transfer market. He criticizes Valve’s hands-off approach to the situation, and seems to look for collaboration between teams to facilitate smoother transfers in the future. He references a number of previous transfers, including that of Vladimir “RodjER” Nikogosyan, who was traded to Virtus.pro in what Zolotarov calls “the most expensive transfer of all time.”

Zayac’s temporary replacement on Na’Vi will be Semion “CemaTheSlayer” Krivulya, who has played for a series of CIS teams in the past, including Vega Squadron, The Pango, and FlyToMoon. He last competed in the DPC under the handle “Slayer” for HellRaisers during their run at DOTA Summit 11.

Virtus.pro has yet to comment on the situation, or announced the signing of Zayac. Both Virtus.pro and Natus Vincere are set to compete in the ESL One Los Angeles 2020 CIS Closed Qualifier which begins in just under seven days, and will run from February 9th-12th. Keep a close eye on Na’Vi’s official website for more info on their new roster and upcoming qualifiers.