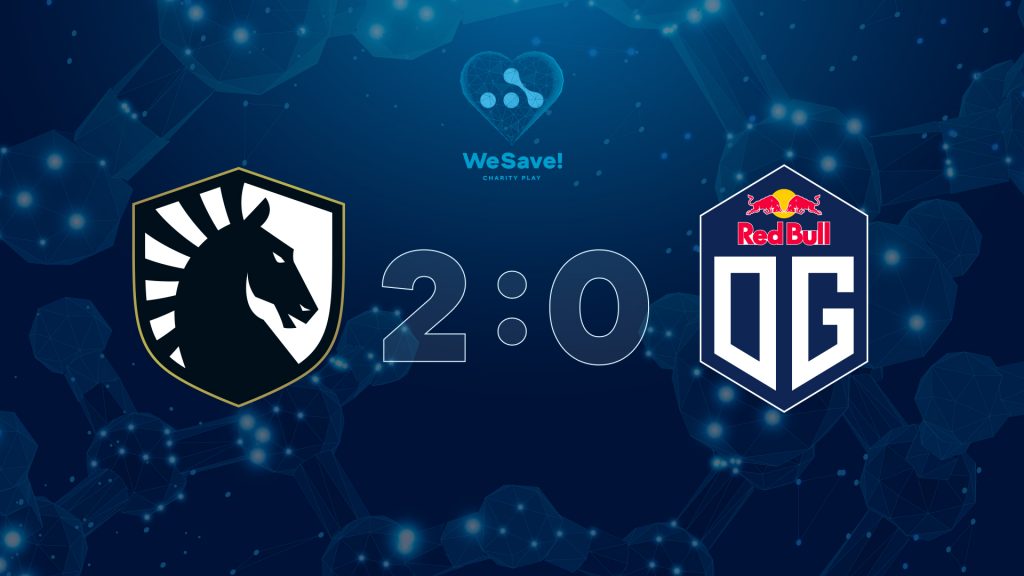 Day two of WeSave! Charity Play is all wrapped up, with another day of charitable Dota gifted to the community. In Saturday’s comparatively short set of games, we amazingly had three 2-0 victories: two clear upsets, and one pure outclassing.

Saturday’s broadcast started again with WePlay!’s expected high production values, with another chorus of classical music provided by a string quartet to add a touch of refinement to proceedings.

What’s more, we were gifted with a host of additional advice and health warnings about the coronavirus, including more handwashing, social distancing, and quarantine tips. Additionally, as the donation amount of the event slowly ticks closer to its stretch goal of $150,000, we edge towards a bonus CIS versus EU Grand Final. However, before we can even think about that, there’s more semi-final action to enjoy.

Our first matchup pitted two titans of Chinese Dota, Invictus Gaming, and PSG.LGD, against each other in a bitter inter-region rivalry match. For this series, we were also gifted with calls from veteran caster duo Dominik “Lacoste” Stipić and Trent “TrentPax” MacKenzie, who joined the stream remotely. Despite some initial sound issues, the cast went off flawlessly, perhaps signaling we may see more surprise guest casters in the future.

Heading into the match, LGD were very much the underdogs. The team has failed to qualify for almost every Dota Pro Circuit event this season, while iG sits near the top of the DPC rankings. Even with a recent reshuffle, it was expected that iG would easily defeat their opponents, who have sorely lacked top-level competitive experience as of late.

After a super-fast draft, iG had picked up the classic combo of Earthshaker and Morphling. Meanwhile, LGD seemed more focused on the current tournament meta, grabbing the essential Mars and Chen that have been a typical pick for the last few events. As we got in-game, the old reliable lane, was suddenly not so secure, as Dark Willow and Mars bullied and killed the Shaker/Morph combo.

Indeed, LGD had an amazing laning phase, despite IG’s comp seemingly having a more reliable early game. iG desperately tried to maintain momentum by rotating top, but LGD immediately reacting with a kill mid. Eventually, iG’s composition took control, and the team pushed down towers and into LGD’s base. But questionable positioning and the early lead maintained by LGD was to be their downfall, as iG found themselves caught and killed multiple times, ultimately losing the match.

Game one was a slow-paced game to start with, and one that was no easy feat to win, but in the end, LGD emerged victorious.

For the next game, however, it was unlikely LGD would repeat this feat. The stack picked up poke champions over engage, with just a Timbersaw to get in their opponent’s face. On the other hand, iG had hard engage and a well-rounded comp with Morphling, Tidehunter, Winter Wyvern, and Void Spirit.

Against all odds, this balanced, well-thought-out composition floundered in the face of LGD. iG found themselves bullied by early poke and aggression, but LGD’s constant pressure was too much. The team pushed towers, taking every advantage they could get, and despite some noble attempts to secure victory, iG fell in a massive upset. LGD has shown that they’re still a force to be reckoned with, especially with the frantic energy of recent acquisition Ren “eLeVeN” Yangwei to the mix. A boom-or-bust player, eLeVeN either hard feeds or carries every match, and luckily for LGD, he did the latter here.

Seeing OG play is always a treat. However, for this event, the squad looked very different. Topias Miikka “Topson” Taavitsainen and Yeik “MidOne” Nai Zheng were out, with scheduling and ping preventing them from competing. Similarly, Syed Sumail “SumaiL” Hassan, blighted by high ping, was stepping into the five-position. Replacing these cores were Johan “N0tail” Sundstein heading mid, with Omar Mohammad “Madara” Dabachach, and Sébastien “Ceb” Debs stepping into the sidelines.

The absence of their starting carries was a massive handicap. While all of these replacements are familiar with their new positions, they were replacing perhaps the greatest trio of carries in the game right now. Team Liquid, on the other hand, was raring to go. The squad was fresh off a slightly underwhelming performance at DOTA Summit 12. Their stack didn’t seem to be playing all that seriously, saving strategies for the Major perhaps, or just embracing the light-hearted tone of the event.

Whatever the reason for their average performance at Summit, the team was holding nothing back here. Unwilling to go easy on the depleted OG squad, and with a host of compositions saved for the Major with no place to use them, Liquid unleashed themselves on their opponent’s in one of the most disappointingly one-sided series of the tournament.

In game one, despite a good initial start, OG faltered quickly. N0tail’s Brewmaster never got off the ground, while his opponents roamed the jungle picking up kills for free. Every lane won, and every lane pushed, hitting the tier-two towers shortly after 20 minutes. OG did manage to catch out their opponent’s supports occasionally, but never enough to gain a lead. This was a perfect example of how the new comeback mechanics can prevent a massive come-from-behind victory.

But it was game two that really showed off Team Liquid’s better grasp of the current meta. On paper OG’s draft was fantastic, filled with comfort picks for their players, strong catch with Enigma, and a Troll Warlord for late game. But against Team Liquid’s in-game prowess, it meant nothing. Michael “miCKe” Vu bullied his lane, dominating a bewildered Madara and Suma1L. High ping or not, Suma1L was wasted on a five-position, and this game showed it. Team Liquid defeats OG in a disappointing upset.

Unfortunately we couldn't even the series against @TeamLiquid.

FURIA Esports vs. No Ping e-sports

The final match of the day pitted two teams who last clashed in the finals of the StarLadder ImbaTV Dota 2 Minor Season 3 South America Qualifier. In that meeting, FURIA Esports fell in a 3-1 defeat by NoPing e-sports. In this match, FURIA wasn’t about to let history repeat itself.

Against their fellow Brazilians, FURIA opted for several pics we hadn’t seen at the event thus far. The Spirit Breaker and Juggernaut rounded out a draft that both aimed to bully early, and scale late. Initially, it seemed like No Ping would easily counter this with their harder engagement composition. But simple mistakes, and sloppy play, perhaps due to ping and latency issues, caused NoPing to be unable to capitalize on any of their engagements.

Ultimately, No Ping would brute force their way to victory. By continually forcing fights, and rushing towers, they pushed down Furia before they even had a chance to react. In the second match, things didn’t get much better. The drafts almost swapped exactly, with just the Chen, Razor, Batrider taken out of the equation. This time with the catch of Mars on their own side, it was No Ping’s turn to miss spears.

Their Death Prophet never scaled in the kind of carry they needed to win. Instead, Adriano de Paula “4dr” Machado with his midlane Lycan dominated. FURIA failed to punish him in any meaningful way, and with double the gold of any opposing carry, he killed them on cooldown. By just having Lycan in lane, No Ping could push down towers, and by 21 minutes, it was GG in one of the shortest matches of the day.

With Saturday’s action wrapped up, we’re halfway through the semi-finals of this very unique event. The production was far more consistent tonally than Friday’s, nailing the light-hearted humor that WePlay! and Dota tournaments as a whole are great at bringing to serious proceedings. While the Dota itself was one-sided, the entertainment was top-notch, including a beautiful new SFM from the masters at WePlay!

The event is also a success donation wise, with the tournament garnering plenty of simply enormous contributions. What’s more, the day closed out with WePlay! unwittingly revealing a few more stretch goals for its event, an NA vs. SA, and SEA vs. China finals if enough money is raised

We want to express our deepest appreciation to this anonymous Kind Stranger!

WePlay!’s WeSave! Charity Play continues on Sunday, and all the way until Thursday, March 26th, on the tournament organizer’s official Twitch Channel.