The Sky is Clear for Rocket League Esports’ Takeoff 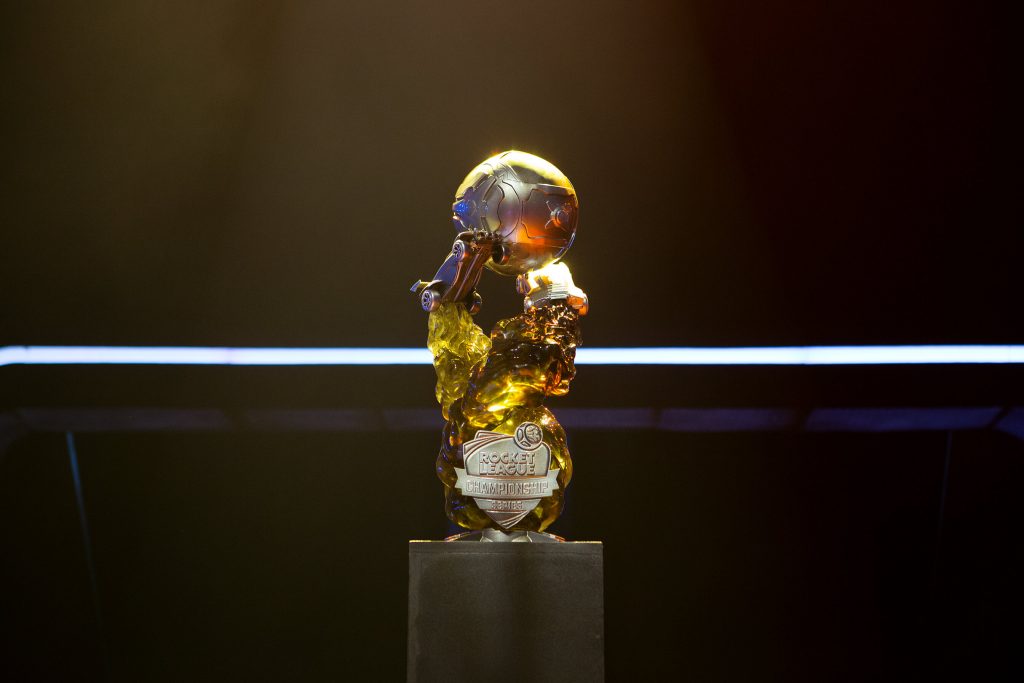 How much will Rocket League esports benefit from the game going free to play? (Photo courtesy Psyonix)

In every top tier esports title, you control an animate being. In CS:GO, Rainbow Six Siege, and Fortnite, you play as a human wielding guns and other weapons, while in League of Legends and Dota 2 you battle your opponents with a wide variety of fantasy creatures. Playing as ‘alive’ characters understandably has a lot of appeal, as they are easier to personalize and interact with for players. However, a rule-breaker might make a speedy ascension towards the upper echelons of esports games soon.

Rocket League, the football (or soccer for you Americans) game in which you don’t kick the ball with your feet, but hit it with cars powered by jet engines, will become free to play this summer. Epic Games, who acquired Rocket League’s publisher Psyonix in May 2019, is finally doing what many had been expecting for a while and letting everyone, across all platforms Rocket League is available on, join in on the fun. The move will have massive ramifications not only for Rocket League as a game, but also as an esports title.

A game worth watching

Bad games don’t become large esports titles. Obviously, this hinges on the fallacy of argumentum ad populum—if the masses think it’s good, it must be good—but there are quite frankly few other tools to use in this case. And, equally as evidently, there will always be more players that are not playing a specific game than those that do play that game, so you’ll always have the majority against you. Esports is still a niche part of gaming. This means that games will always have to accept that only part of their player base is interested in following the title’s competitive scene. So, if you want to thrive in esports, you had best make sure those player numbers are consistently high to get a sizeable esports fanbase for your title.

Rocket League has prospered in this area. Upon reease in July 2015, the sequel to ‘Supersonic Acrobatic Rocket-Powered Battle-Cars’ (yes, it’s a sequel, and yes that really is its predecessor’s name) was met with widespread acclaim. The extremely simple concept, which still offered room to be extremely creative, hit the right chord for many. And Rocket League has been no ‘one year wonder’ at all. With regular content updates and events, Psyonix has managed to not only retain its player base; there are more people online nowadays than there were on a daily basis in the year after Rocket League’s launch. It has only become more popular.

It’s very impressive that Rocket League has stood the test of time this well. The formula for the game just works. It’s also what gives it so much potential in esports.

For any entertainment product to be successful, consumers have to be able to relate to the product in some degree. In esports, this means the audience has to have some level of understanding why team 1 is beating team 2. That doesn’t even mean that a spectator should understand the game on an amateur level. Though it definitely helps if you understand which weapons there are in Counter-Strike, how rotations work and what the intricacies of the in-game economy are, you don’t need to know them to enjoy competitive CS:GO. The simple concept of ‘if you kill them, you win’ that the game has, combined with an incredibly polished viewer layout make it one of the best spectating experiences in esports. Even to the layman, great plays can be recognized relatively easily in CS:GO.

Games such as Dota 2 and League of Legends have a much higher barrier of entry with the hundreds of characters and items. Both games greatly profit from being genre-defining titles and riding the wave of success that came with the popularity of the genre itself. Still, while MOBAs are more difficult to watch, the in-game objectives themselves are straightforward: destroy towers, destroy the enemy base, win the game. Even if team fights are often cluttered in MOBAs, the bird-view spectator mode helps a lot, and it’s still pretty easy to conclude who comes out on top at the end of a brawl.

Still, it is a blessing for competitive Rocket League that the game leans so heavily towards the spectating simplicity of CS:GO. It makes the game so much more accessible. The simple concept of scoring goals before a timer runs out makes it clear to viewers who is winning the game. The rocket-powered cars allow for mind blowing tricks. It combines to form a well-balanced viewing experience that can create many moments of excitement.

Nevertheless, having the right recipe for an esports title doesn’t mean it will be successful. Other popular multiplayer games have risen and fallen for several reasons. Sometimes, the game itself wasn’t maintained well, leading to an exodus of casual and professional players alike. Other times, the esports scene wasn’t handled adequately, and people lost interest in the competition.

Yet here too, Rocket League has shown a lot of promise. As with any healthy esports scene, it grew from the ground up. Grassroots events spread the excitement for Rocket League esports early on and third-party tournament organizers picked up on it. Psyonix, thankfully, embraced the competitive side of their game and put together a structure to quench the thirst for competition of their fans. The Rocket League Championship Series was born.

Rocket League had a steep uphill battle to climb. Within esports, it’s already hard to tie fans to your brand if your title belongs in the beloved MOBA or FPS genres. But soccer played with cars? As beloved as the game Rocket League may have been, the early years of Rocket League esports were a struggle for finding a more mainstream appeal of esports fans. And unfortunately in this era, when you don’t manage to get fans hooked on your esport immediately, you lose their attention and you have to grind hard to win their hearts back.

Over the years, the RLCS has been tweaked in many ways as Psyonix tried to find a sustainable format that did justice to their professional player base and fan base, as well as reaching and binding new viewers to the title. What started as one unified league was split into a North American division and a European division in Season 5. The top tier teams being split across two regions resulted in a bit of average viewership lost, but the numbers are still impressive. RLCS Season 9, which concluded in March this year, peaked higher in average viewers than any prior season.

Today, the RLCS hosts many teams of fame. In the North American league, teams like Cloud9, G2 Esports, and NRG Esports face off against each other. Meanwhile in Europe, TSM, mousesports, and Dignitas are among the most well-known esports brands. And Europe even has two soccer clubs represented in their league: FC Barçelona and AS Monaco both have Rocket League teams playing on-stage.

Additionally, third-party tournaments have stood by Rocket League throughout its climb. The most noteworthy organizers include Dreamhack, Gfinity, and ELEAGUE. All saw the potential Rocket League esports has, followed its growth, and assisted it massively by giving their take on what competitive Rocket League should look like. Through this testing, the esports scene evolved, got polished, and consistently continued to grow as a product.

The free to play influx

Epic Games is making Rocket League free to play on all platforms this summer. Simultaneously, they will be removing the game from the Steam Store (you can still play the game if you already own a Steam copy of it), and make it exclusively obtainable on the Epic Games Store. It’ll be hard to follow how this move will affect the Rocket League player base, as Epic Games isn’t transparent about active player numbers at all. However, you don’t need to be a rocket scientist to understand that an already popular game becoming free to play will lead to an influx of new players. The question is whether they will stick around.

It’s slim pickings if you want to use an analogy to hypothesize what the free to play move can do for Rocket League. But yet again, Counter-Strike: Global Offensive fits the bill best in a comparison. After six years of being pay-to-play, CS:GO went free to play in December 2018. It had some trouble getting started when it originally launched, but from mid-2015 onwards had stable, good player numbers. When in 2018 the player base dipped and Valve made it free to play, the climb upwards began again. In April 2020, CS:GO broke the mythical barrier of one million concurrent players, and did so several times.

CS:GO started slow, but is now consistently one of the most popular teams on Steam. (Chart courtesy SteamDB)

Obviously, there isn’t a guarantee that the same will happen for Rocket League. But the data speaks in the game’s favor. Up until now, both Rocket League the game and Rocket League esports have been incredibly stable. The trajectory of the title already was promising, and can perhaps best be compared to that of Rainbow Six Siege. Both titles started off as small esports having to climb an incredibly steep hill. But, in spite of perhaps rough-looking odds, they’re managing to do it steadily.

Rocket League will not burst into the highest tier of esports title popularity immediately after it becomes free to play. While its Western communities have been doing impressively well, there is a lot of building to do still. Even if Psyonix doesn’t prioritize making it a truly global esport by investing more in its Asian scene—CS:GO, a huge esports title, manages to thrive without much of an Asian scene present—their Western fan base still needs to grow.

That said, Rocket League going free to play does provide the opportunity for Psyonix to shift a few gears up and speed up Rocket League esports’ growth massively. With more players involved in the game, there is an opportunity to grow the esports fan base. Psyonix already intertwines competitive Rocket League with the game itself through in-game promotions. It will be a big task for the publisher to bind the impending player increase to their esport, but so far they’ve done an excellent job. If they double down on it with this incoming horde of players, Rocket League esports can rise as quickly as their jet-engine powered cars can.

The charm of Rocket League as a game is bound to fill the hearts of many more people this summer. With it, many people can be introduced to a thrilling form of competition and root for their favorite players as they fly across the stadium performing the wildest moves. Rocket League has been around for five years now. In phase one, the game became a stable esport. Phase two begins now. Time to find out how high Rocket League can fly.

Other
Share
Tom Matthiesen
Tom has been an esports journalist since 2015 and has taken an interest in a wide range of esports titles. More recently has fallen in love with League of Legends esports. In particular, the League of Legends European Championship.
Follow me