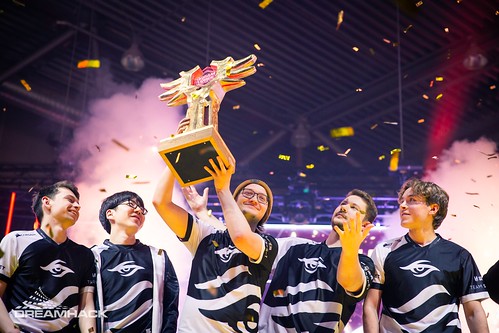 In a decisive sweep of their opponents, Team Secret once again demonstrated the supreme level of polish that this squad has. The stack of Lasse Aukusti “MATUMBAMAN” Urpalainen, Michał “Nisha” Jankowski, Ludwig “zai” Wåhlberg, Yazied “YapzOr” Jaradat, and Clement “Puppey” Ivanov, continue to impress, showcasing both their incredible individual talent and synergy as a team. In particular, Puppey and Nisha had some of the most impressive performances we’ve seen from them in recent memory, and shone in the finals, both leading the way for their team.

It’s been a long, painful slog of a tournament for Team Liquid. The squad barely edged their way to a spot in the playoffs, with a 1-3 record. However, the team had an individual game score of 4-6, showing there were some signs of life. As the playoffs kicked off, these signs of life transformed into a full-on return. A testing series between them and FlyToMoon that saw TL initially struggle, they stack hit their stride by game three, crushing their opponents with a potent Queen of Pain performance.

From there, the team narrowly defeated Alliance, who was seemingly broken from the prior defeat by Secret and quickly advanced to hand another loss to Virtus.pro. For their final trick, TL managed to make OG, who’d been seemingly revitalized this tournament, look humble, as the TI9 winners collapsed in the face of another incredible Queen of Pain game. After a difficult event all round, Team Liquid had earned a deserved spot in the finals, on the back of Max “qojqva” Bröcker’s superb level of play.

But in comparison to their final opponents, Team Secret barely seemed to break a sweat in this event. An undefeated run through group stages led to a similarly flawless journey through the playoff bracket. Along the way, Team Secret crushed Alliance and OG, both teams who had seemed to be approaching the top of their games. Alliance, who’s new mix of old and new talent, and OG, who was actually playing with the majority of their roster, could do nothing to stand up to the sheer dominance of Secret.

Alliance, in particular, looked like the most promising opponents for this Team Secret side. If Puppey’s side had a breaking point in this tournament, it would have been in the opening Upper Bracket match against Alliance. Both matches were bloodbaths, especially in the side lanes, as Secret’s offlane duo butted heads with Alliance’s top carries. But throughout the series, Secret managed to mitigate one of Alliances most potent weapons – Nikolay “Nikobaby” Nikolov, who had a dismal pair of games. Without him, Secret could easily manhandle their opponents, and after this, there was little that could slow down Secret in their search for the gold.

Faced with this undefeated monster, Team Liquid opted to take away a lot of dangerous support and offlane picks with their bans, including Bounty Hunter and Earthshaker. The aim was to cripple YapzOr and Puppey, especially since Secret had taken the Mars pick off the table as well. The crux of the opening game would rely on whether Team Liquid’s Broodmother could scale into the map-dominating monster with Aghanim’s Scepter to backup the Queen of Pain. Meanwhile, for Secret, they Templar Assassin/Ember Spirit was their ticket to victory.

However, Yazied “YapzOr” Jaradat started immediately bullying Liquid’s offlane in the early game with Sniper. Luckily, an over-extension from Templar Assassin in mid gave Broodmother the early lead she needed, and there was a glimmer of hope for Team Liquid. But then Nisha happened. The carry exploded, seemingly to grab ridiculous amounts of gold out of nowhere. The carry delivered a genuinely out-of-this-world performance. Farming a record amount of CS from the 19-minute mark onward, he led his team to a game two victory like no other.

It's the 23rd highest ever last hits / minute, but most are from VERY long games.

By the end of the game, Liquid could barely manage to put sustained damage on Secret’s position 5. The Enchantress and Abaddon heals were just too good.

Things went from bad to worse for the second game, which was almost an immediate disaster for Liquid. Team Secret grabbed three bounty runes to start off the game, and from there, things went downhill. With Yapzor on the unorthodox Lion pick, the support position was incredibly dangerous, and the team quickly found themselves with a strong lead. There really wasn’t a chance for Liquid to breathe in this game, and after a 14-minute Roshan, the game neatly wrapped up as Secret pushed onto TL’s high ground 18 minutes in.

In what would be the last stand for Team Liquid gambled on Windranger. But as SirActionSlacks so succinctly put in his recent video, that hero is often a trap for teams. The elven ranger was unable to provide the carry potential needed, and in a hugely impressive display, Team Secret claimed victory, in a flawless, undefeated run through this event. Once again, it was Nisha pulling the weight of his team, posting an incredibly impressive display on Beastmaster, a hero not often seen in the mid lane.

In an event that started with great promise for the likes of Alliance, Ninjas in Pyjamas, and OG, we’ve ultimately seen Team Secret’s dominance continue. The European team took apart all of their opponents piece by piece. What’s more, they did so with almost no signs of weakness, taking home $62,000 in the process.

Team Liquid, on the other hand, is left with second place and a still-respectable $32,000 in prize money. This squad showed signs of brilliance and tenacity, turning around an event that had very much gone sour for them in the beginning. Yet still, it wasn’t enough to topple Team Secret.

EU and CIS’s next tournament is ESL One Birmingham 2020, which begins tomorrow. It’s a short break for Team Secret and Team Liquid, who, ironically enough, will face off again in less than 24 hours in the opening matchup of the event. You can catch this Grand Final rematch from 2pm CEST on ESL’s official Twitch channel.