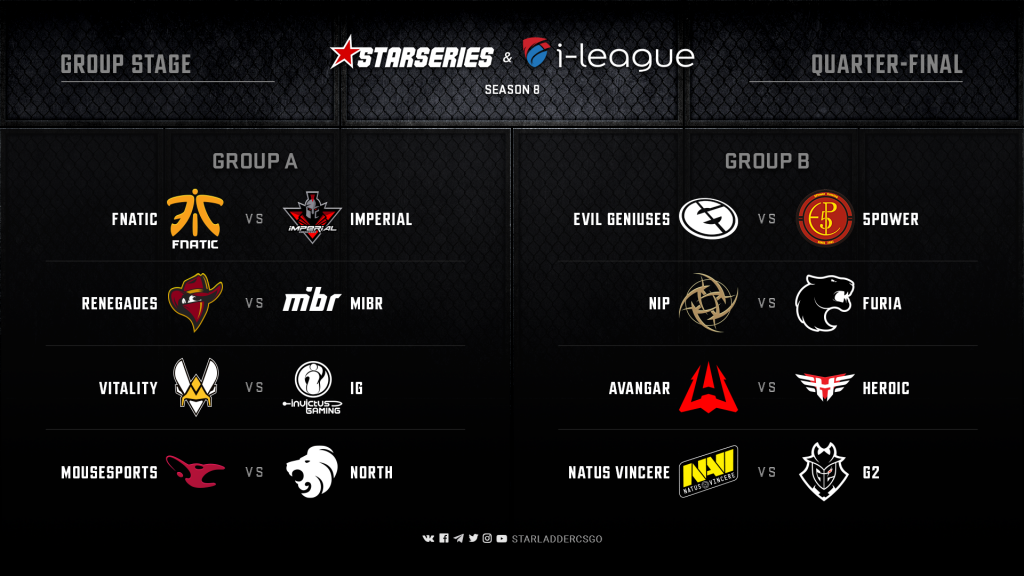 StarSeries & i-League CS:GO Season 8 is set to begin on October 21. It will run until October 27. Sixteen teams from across the globe have gathered in Belek, Turkey for a chance at the $500,000 prize pool. With both a mix of established teams and newly modified rosters, the event is anyone’s to take.

Group stage will consist of two separate double elimination brackets, each with eight teams. Every match during the tournament will be best-of-three. Teams advance to the playoffs by winning two matches. The group stage winners are sent to the upper bracket while the group stage runners-up go to the lower bracket. The eight playoff teams will continue in the double-elimination bracket until one is crowned champion.

The sixteen teams participating are:

Right away, Evil Geniuses look to be the favorite coming in. While they did struggle at DreamHack Malmö, they recently went undefeated at ESL Pro League Americas and the Esports Championship Series Americas week three. EG are hoping to complete their bounce back at this event.

The French rosters of G2 Esports and Team Vitality are also going to be interesting to track. The dust is settling on the recent roster moves of Nemanja “nexa” Isaković and Nemanja “huNter-” Kovač to G2 and Richard “shox” Papillon to Vitality. Vitality have some momentum going from a second-place finish at Malmö, while G2’s roster debut there was rough at best. The trajectory of these squads should become apparent soon.

The Swedish teams of Fnatic and Ninjas in Pyjamas are also coming into i-League hot after roster changes. The return of Robin “flusha” Rönnquist and Maikil “Golden” Selim to Fnatic and the addition of Simon “twist” Ekuasson to NiP has reinvigorated these teams. Both made top six at Malmö, with Fnatic even taking the entire event. The Ninjas also just won first place at ECS Europe week 3. So far, Fnatic and NiP show potential for a resurgence of Swedish CS. This event will be a good look at whether or not this early success was just a honeymoon phase.

There are many more teams with potential to go far, such as Natus Vincere, mousesports, and AVANGAR.

Ever since Ladislav “GuardiaN” Kovács’s return to Na’Vi, they have been looking like a dangerous squad. Their evolution is partially thanks to Kirill “Boombl4” Mikhailov’s in-game leading having time to develop.

Mousesports are coming off a top six at Malmö and an undefeated run at ESL Pro League Europe. They have always been a team that can upset the bracket at any time.

AVANGAR have been on a break recently, only playing in the online ECS tournaments. Their last LAN was over a month ago when they won BLAST Pro Series Moscow. Hopefully they come in rested and prepared for the competition.

The group stage begins on October 21 at 3:00 a.m. EST (9:00 a.m. CEST) with North versus mousesports and Team Vitality versus Invictus Gaming. There will be a primary and secondary Twitch stream as some matches will take place simultaneously. Tune in to find out who will rise to the top!